Comic and Toy fans put their money where their hearts were last weekend for the first ever Heroes Give Hope  charity auction.  The Live Online Auction event featured dozens of custom made action figures and works of  art specially commissioned for the event, and raised nearly $1000.00 for the Disaster relief agency ConvoyofHope.org 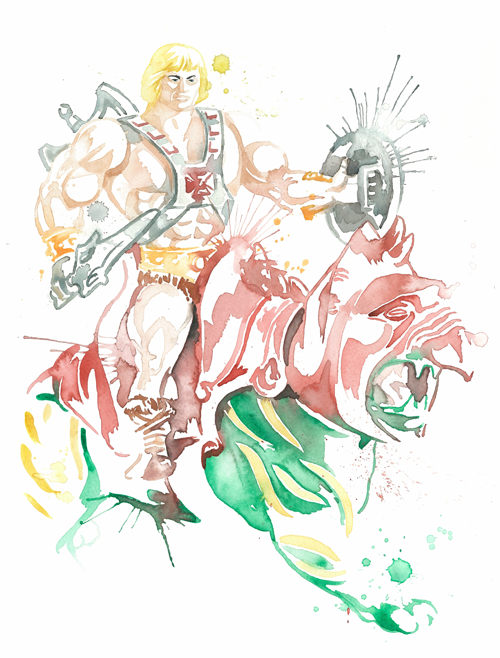 Sponsored by internet Auction House TheBigToyAuction.com, the first of its kind event showcased the talents of both professional and amateur artists from a broad range of fields.  Each artist was asked to create and donate a piece in the theme of “everyday heroes.”  Pieces ranged from a tongue-in-cheek GI Joe based custom “bootleg” figure by Suckadelic Toys to UK Illustrator Dave Williams’ original print featuring dozens of minimalist interpretations of Comic, TV, and Movie heroes arranged to form the word “Hope.” The big item of the night, selling for $125.00 was a watercolor painting of the Iconic He-Man and Battlecat Figures by artist Jonathan Reincke.  Other works included versions of Batman, Transformers, the X-Men, Micronauts and Star Wars as well as a number of original creations.

At the end of the event, over $900.00 worth of items were sold with 100% of the Hammer price going directly to Convoy of Hope.  Convoy is a 501(c)(3) charitable organization providing disaster relief, feeding initiatives and community outreach.  Since its founding in 1994, Convoy has provided aid to more than 45 million people in over 100 countries, including the victims of the Japan and Haiti earthquakes, the Joplin tornadoes, and New Orleans following hurricane Katrina.

Along with a donation by TheBigToyAuction.com, the event raised a total of $1000.00 for the charity. “We were so glad to have the opportunity to donate our services to this cause and help out, that we wanted to do a little more,” said Christopher Noon, founder and auctioneer of TheBigToyAuction. “$1000.00 looked like a good round number, and we were already pretty close, so we thought ‘what the heck?’ and kicked in the rest ourselves.  It’s for a good cause.”

The benefit auction could not have come at a better time, as Convoy is already responding to the damage caused by Hurricane Irene by delivering supplies across the eastern seaboard.

Plans are already under way to make this a recurring event. “We just want to thank everyone who got involved.” says Noon. “We weren’t sure at first how well it would be received, but our artists really came through for us with their donations. The fans came out in droves to bid, and the news sites and blogs really got behind this in a big way. Even though it was the first time we had taken on something this big, with trying to coordinate all of our donors, We learned a lot. It was great to be able to show the world what motivated Geeks can do when we work together.  We’re looking forward to doing it again, but even bigger next time.”

Those wishing to donate directly to Convoy of Hope can do so through their website at http://donate.convoyofhope.org