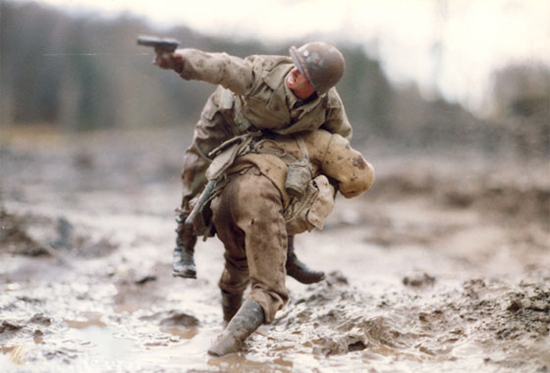 Welcome to Marwencol. There’s a lot going on in this town, and its creator, Mark Hogancamp, is writing the script.

After a brutal attack left him brain damaged and broke, Mr. Hogancamp sought recovery in Marwencol, a 1/6th-scale World War II-era town that he created in his backyard. Mr. Hogancamp is a rare breed who found therapy in his “toys.”

After years of seeking refuge in Marwencol, a New York art gallery wanted to take on his miniature town and promote it for the work of art that it is. This process was captured in a documentary which recently premiered at the 2010 South by Southwest Film Festival, where it took top honors.

I know a lot of our readers collect 1/6th scale figures, but I doubt many of you have this kind of dedication to your hobby. Would you willingly take your figures off the shelf and bury them knee deep in mud or splash them with paint in order to create a scene. I guarantee that this 1/6-scale town will make your head spin, so strap yourself into your wayback machine and visit Marwencol.