It’s not real if you’re the only one who knows about it. At least that’s what brought me to finally writing this post.

I’ve been working on a secret project for a while now and it’s come to the point where I need to call in the reinforcements and make it “real,” or risk watching it fizzle away as an unfulfilled dream. I’m going to put this all out there now, because if I don’t, I might not get the courage up to do so later. Today, I am going to tell you about a dream I have of publishing my own magazine.

As a graphic designer and publishing professional, I have been producing publications for other people for over 20 years, and it has been a long held dream of mine to produce a magazine of my own. I present you with the Cool & Collected Magazine! 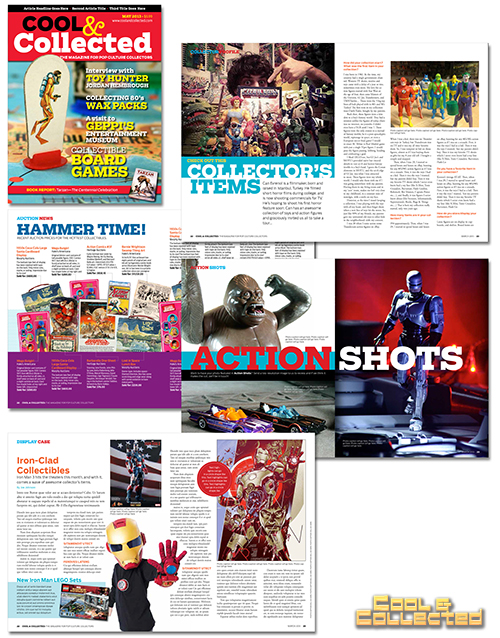 (Concept is still in the very early planning phase!)

The magazine market may be on the ropes, but I think there’s still a market for collectors — we like stuff! And for those collectors who don’t want more items taking up room on the shelf, the magazine would be available in an electronic format.

While developing the layout, page plans, story ideas, advertising opportunities, etc. it has become clear to me that this is not a one-man show. I need help, primarily in the content-generation department. For the magazine to succeed, it will need experts writing about topics that they know better than most. I’m going to need a Star Wars guy, a comic book girl, an action figure aficianado, a movie prop master — you get the idea. I need access to people who have the goods and would be willing to photograph them for the magazine.

Since starting this website, I have encountered an immense number of passionate collectors who know more than I could ever imagine about certain pop culture genres, and I would love to have each and every one of them involved in this magazine in some way.

The departments of the magazine would fall along the same lines as this website, with categories such as:

And the areas of collecting that would be covered:

The magazine would consist of “evergreen” articles as well as timely items. Since the subject matter will mostly focus on collectibles from the past, rather than current ones, the shelf life of the magazine will be pretty high. Each issue will have two or three long feature articles, each one tackling a particular collecting genre or topic.

I know I can run a tight ship and wrangle all the elements that will need to be wrangled–that part doesn’t worry me. What does worry me is figuring out the best way to get high-quality content. I have never taken out a bank loan for my business, and won’t be changing that philosophy anytime soon. This mindset has held me back on a few ocassions, but it’s also probably been for the best–going into debt is not something that appeals to me. I have looked into starting a Kickstarter project, and haven’t ruled it out entirely, but would need to find out more about the process.

I would like to gauge the level of interest in something like this, both from potential readers and contributors. Is this a good idea? Would you buy it? Would you want to be a part of it in some capacity? I’ve always been receptive to the opinions of others, and if the only sound I hear is crickets, then that will be instructive as well.

At this point, I could use a little encouragement. If you think this idea has legs, give me a little “Go get ‘em” with a comment below. And if you would like to be a part of this in some way, let’s talk! Even if only one issue ever makes it to print, then this guy’s dream will be fulfilled. Oh, and if you happened to want to invest in my dream, I definitely want to talk with you! 😉

This post is part of the weekly challenge from the League of Extraordinary Bloggers. Other great bloggers are writing about their dreams over on Needless Essentials, Mos Espa Blog, G.I. Jigsaw, and more!