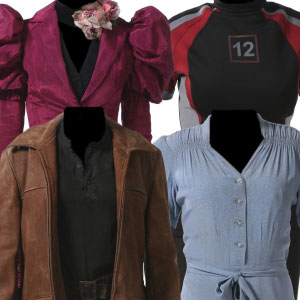 Fong Sam, a friend of Cool & Collected, has launched a new business, Haxbee, which has been busy assembling an awesome new exhibit and auction featuring items from the Hollywood blockbuster, The Hunger Games. The exhibit will showcase original screen-worn costumes worn by Jennifer Lawrence as “Katniss,” Josh Hutcherson as “Peeta,” Elizabeth Banks as “Effie,” Stanley Tucci as “Caesar,” Liam Hemsworth as “Gale,” Woody Harrelson as “Haymitch,” Lenny Kravtiz as “Cinna,” Donald Sutherland as “President Snow,” Wes Bentley as “Seneca,” and many, many more.

To kick off the tour, Haxbee and its subsidiary, Blacksparrow Auctions, will be providing a special sneak preview at The Hollywood Show in Los Angeles this weekend, January 11 to 13. The Hollywood Show will be held at the Westin Los Angeles Airport Hotel, but if you can’t make it this weekend, don’t worry because the Hunger Games Costumes Exhibit will hit the road and make its way across the country. Here are a few of the scheduled events:

The exhibit’s last stop will be in New York City, where ReedPOP–the largest producer of pop culture events in the world—will host a live auction at New York Comic Con. Over 200+ costumes will be on the auction block, so if you’ve ever wanted to own a bit of District 12, here’s your chance!