San Diego Comic-Con is coming up and Joe tells his crew that they need to hit it hard, and try to talk with as many industry insiders as they can to find some treasures to bring to auction.

Joe, Brian, and Jon have a mapped out game plan for covering the entire convention. It’s kind of cool to see the convention from this sort of viewpoint, almost as if we are right there with them. The guys talk with various celebrities to see if they saved any props from the TV shows or movies.

One of my favorite shows from the 80’s was well represented. I’m a little disheartened to see Gil Gerard, AKA Buck Rogers, looking so old! Erin Gray (Col. Wilma Deering), on the other, has held up MUCH better. She seems so nice as she talks with Joe about what he does at Profiles in history. She tells him about a space ship model she was given from the show. Unfortunately, it melted after being placed next to a heating vent, but Joe thinks it still might be worth $20-30k and wants to see it. Erin is excited to think she might be able to send her daughter to NYU.

I’ve mentioned this in previous recaps, but it is SOOO strange to see these actors as regular people. Gil Gerard and Erin Gray look like they might be my neighbors, and I might sling burgers with them at the annual block party. The curtain has been pulled back and it’s very weird. 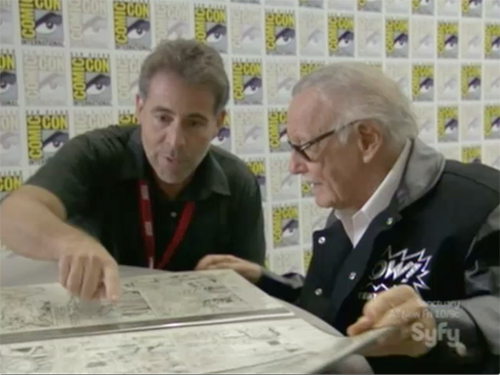 Jon has a friend who is representing an anonymous collector who has amassed the original Jack Kirby and Stan Lee art boards from Fantastic Four #12. This guy is carrying the art around in his backpack at Comic Con!  Joe says it’s worth up to a million dollars, but they have to authenticate it first. Lucky for them, Stan the man himself, is at the convention. Joe sits down with Stan Lee, who is excited to see the art with his remarks written in the borders, and he tells Joe that the art is the real deal.

Poor Tracey is having trouble with procuring some puppet props from the Corpse Bride. Will she possibly get them in time? Stay tuned.

Joe flies to Chicago to meet with Dan Knoll, a collector of Bruce Lee items. He has scripts and other items from the Bruce Lee estate, but the prized item Joe wants to auction is Bruce Lee’s Kato cap from the Green Hornet TV show. He thinks it will sell for $10-15k. Dan also has one of the Wilson balls from Tom Hank’s Castaway, which is a great, iconic prop. As with previous episodes, my mind is boggled that these items are living a quiet life in suburbia. 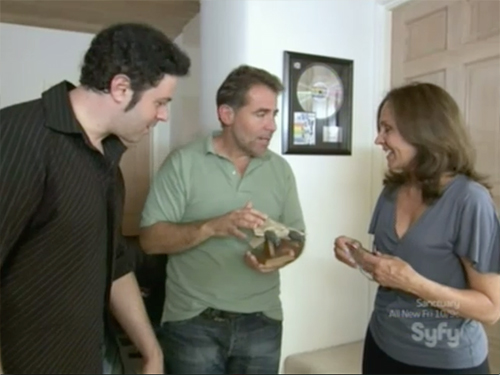 Joe returns to California and goes to Erin Gray’s house with Jon, to see just how melted that Buck Rogers star fighter model is. It’s pretty melted. I thought it was pretty cool when I saw Erin Gray had a Buck Rogers movie poster in her study, exactly like the one I have framed in my cave.

Joe gets back to the Profiles in History office and is disappointed to learn that the owner of the Fantastic Four #12 artwork is not interested in selling at auction. He wants a cool million sold straight up — no auction. I don’t blame him, but I would have put it up at auction with a million dollar reserve. I guess that’s not the way to go or else Joe would have suggested it.

Tracey is still having problems.

Joe takes the star fighter to professional modellers, Mike Moore and David Jones, to see if it can be repaired. David Jones is actually the one who made it originally. They tell Erin that it can’t be fixed, and it isn’t an actual screen-used prop, so it looks like Erin’s daughter is destined to attend community college. At least she gets a free case for it from Joe. 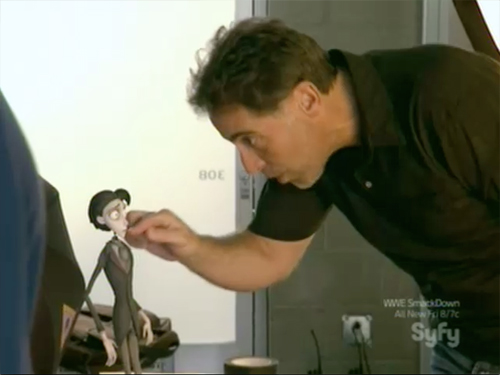 Tracey’s Corpse Bride puppets finally arrive, and she is off the hook again. Whew. 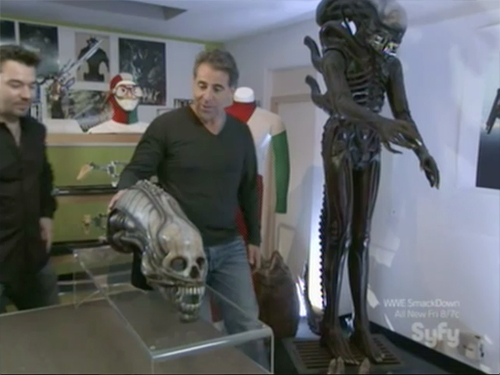 Joe visits Stephan Lokotch, a movie producer and collector of props. He has an incredible room full of movie props, including some truly amazing Alien props. He has an Alien hero mask designed by H.R.Gieger, which Joe estimates at $40-60k. Joe wants to put everything up in his auction, but Stephan only wants to test the waters with one mask at this point.

It’s auction day and there are 12-15,000 bidders in person and online. The Victor Van Dort Corpse Bride puppet sells for $27,500. The Alien mask sells for $60k, and the Kato cap sells for $27,500. All totally worth it. I wish I was insanely wealthy — or just wealthy. Or, just wealthy enough to fly to California and attend one of these auctions as a spectator. But then I would probably be arrested for slobbering on all the amazing props. A guy can dream though.

Anyone else like what they saw in this episode? Do tell.