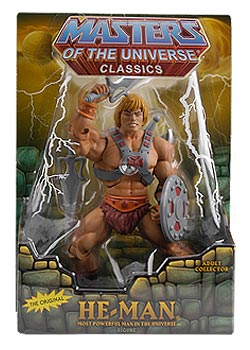 Just in time for Christmas, Mattel is re-releasing the greatest hero of the Masters of the Universe Classics series. He-Man, the most powerful man in the universe, was a huge success last year, so Mattel reworked him a bit and will re-release him on November 18, but only on the MattyCollector.com web site.

The new package design has a yellow burst stating “The Original” as homage to the He-Man from the original line. The new figure has the shoulders corrected, the red around the eyes removed, and the overall body gloss is toned down a bit.