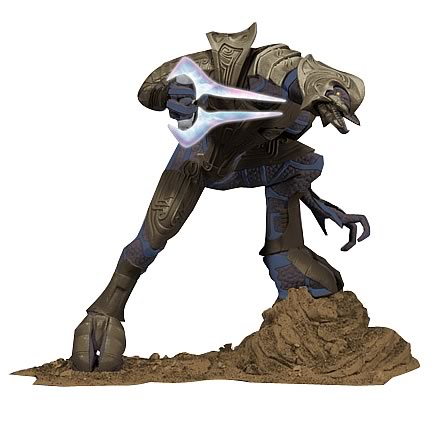 The Arbiter has arrived! Two powerhouses of pop culture– McFarlane Toys and Microsoft– are collaborating to produce action figures based on the fantastically popular video game series Halo. From the incredible 3rd entry in the Halo trilogy, comes this amazingly detailed and accessorized 8-inch scale Arbiter statue. You can’t miss with this guy stationed on your desk or in your collection!

Halo is a popular series of science fiction first-person shooter video games developed by Bungie Studios and published by Microsoft. The games are set in the “Halo universe”– a science fiction universe created by Bungie Studios exclusively for the series. Halo: Combat Evolved quickly became known as the first “killer application” for Microsoft’s Xbox video-game console when it was released in 2001, achieving both critical acclaim and financial success. Combat Evolved was later published on the PC and finally released for the Mac (for which it was originally developed prior to Microsoft’s buying developer Bungie).

If you collect all things Halo, be sure to check out this site: masterchiefcollector.com