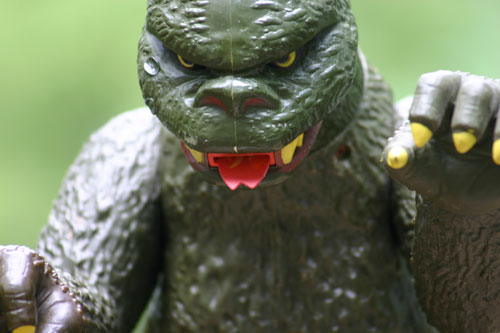 This big green bit of plastic goodness arrived on my doorstep yesterday. Over 30 years ago, I was a wee lad when I was first introduced to this big guy. No matter how much I whined, I could never crack my parent’s resolve to ensure this ugly thing never made it into our home. I eventually abandoned my pursuit but never totally forgot about this lovable hunk of plastic.

A few years ago, I started to pay attention to these Godzilla toys on eBay

and at various toy shows. This guy is big, really big, standing at almost two feet tall, he makes a real statement on the shelf (assuming you can find a shelf big enough for him). He towers over everything else and looks like he is about to trample them like they are mere citizens of Tokyo. 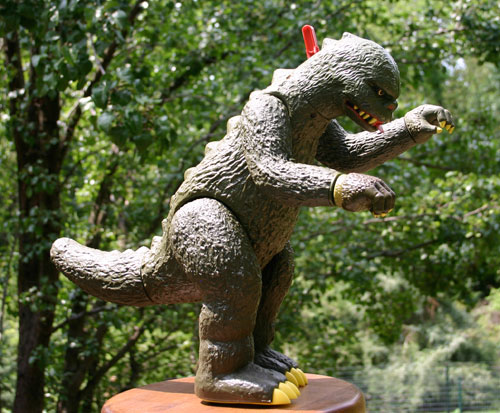 The Godzilla Shogun Warrior from Toho was released in 1977, and like the other Shogun Warriors, has parts that shoot off and poke kids’ eyes out. The Godzilla figure has a fist that shoots off at a pretty high rate of speed. I never could understand why Godzilla would want to lose his hand to knock down a building. I mean, it’s his hand, doesn’t he need that for other things, like swatting at pesky airplanes or grabbing Rodan’s tail or something? Anyway, the other great feature with this toy is his flaming tongue of fire. You pull down on the red lever on the back of his neck and are amazed by the burning flame of destruction that spills forth.

I have a small list of “holy grails” that I am always looking to find and add to my collection. It’s kind of silly that I think of this Shogun Godzilla as a holy grail since it’s not very expensive and it’s pretty easy to find one, but I’m always looking for “the deal.” On the 4th of July, while red blooded Americans were out celebrating with their families, I was tethered to an eBay auction and snagged this guy for just $33.00 – a steal! It has its fist, its tongue, minimal paint chips, and its lever is not broken. I’ve seen similar Godzillas sell for $50.00-100.00, so I’m pretty pleased with my purchase.

It might seem strange to non-collectors (i.e. my wife) why a grown man would want this in his life since it’s just a kid’s toy (a BIG kid’s toy). For me, I don’t really even see them as toys so much as pieces of our pop culture past, and they remind me of what was going on in popular culture of that time. And, no, I don’t take him of the shelf and start pew-pewing with the other toys (very often), but I do like to photograph them. Whether it’s Godzilla of the 70’s, Batman of the 60’s, or space toys from the 50’s, these items are relics of our not so distant past. Some people can’t get past the whole 40-year-old virgin mentality, and that’s fine, but when you see a large collection of vintage toys, no matter what era, and it’s displayed in a classy way, there’s no denying that these items are pretty darn cool. 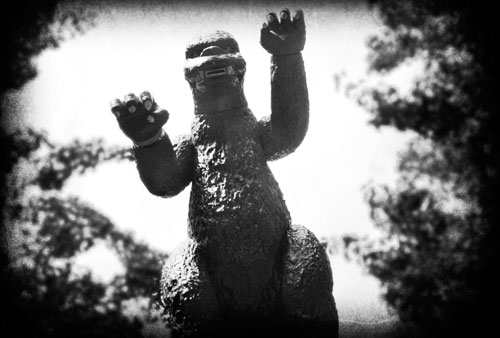 Leave a Reply to Writing Within the Lines Cancel reply