There weren’t many sales again this weekend but we had to get out there and at least try.

For me, there’s nothing worse than pulling up to a yard sale and seeing someone walking away with a giant bin filled with Legos and action figures, but that happened at both of the yard sales we hit on Saturday. Five minutes makes all the difference in the world of yard sales.

I didn’t really find much on this outing, but my kids made out pretty good… 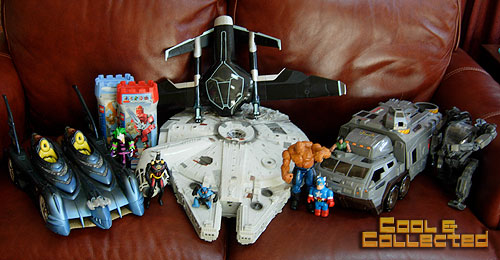 This is what $11 gets you at a yard sale (not counting the Tron ship). This was such a fun haul because it had these three massive vehicles. I usually don’t like buying big items because they cost too much to ship if I sell them on eBay

, but these were bought to be played with, so we certainly couldn’t leave behind the Millenium Falcon! 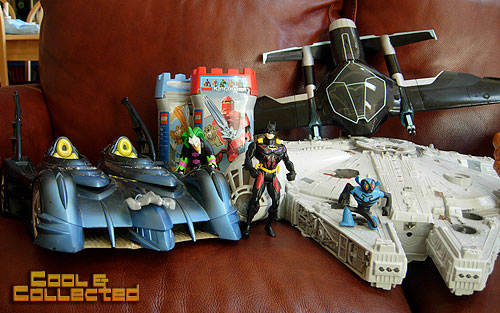 This Batmobile is HUGE! It’s from 2003 and was recalled due to the large fins poking kids’ eyes out across the country, but it’s pretty darn cool. One side’s cockpit detaches to become a Bat Motorcycle, and there is a shooting missile at the front. It came with a creepy Joker figure and an 80’s Batman figure — both of whom look tiny in this vehicle. Did I say this thing is big?

I cheated a little by putting that Tron Light jet

in this picture. I went back to Target and got that vehicle off the clearance rack for $7! Tron toys may have been duds, but that ship is a really impressive toy, and my kids will certainly get $7 worth of enjoyment out of it. 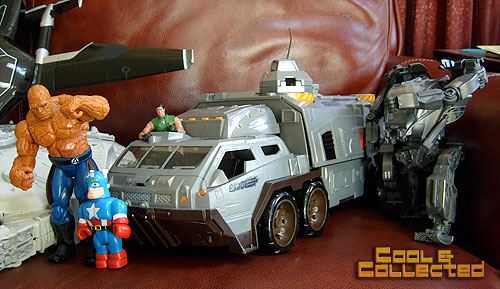 Here’s another massive vehicle — a 2005 GI Joe R.O.C.C. vehicle with the driver, Long Range. This is a fun vehicle that folds out into a command base, and it reminds me of the older GI Joe vehicles I had as a kid. This vehicle originally retailed for $40, and the Light Jet, Millenium Falcon, and Batmobile were probably sold around that same price point. Sure, these may be missing a few parts, but for play time, you simply can’t beat a yard sale’s prices.

Well, that’s what the weekend gave up for us. How did you fare?