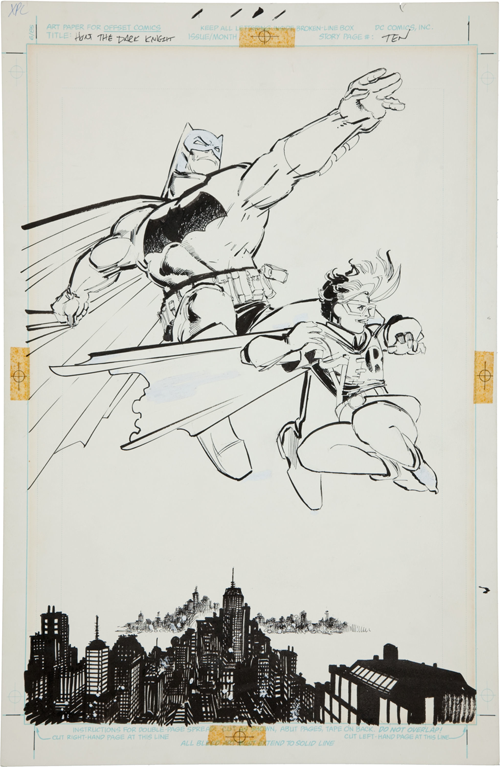 The most iconic piece of 1980s comic art in the series that revitalized Batman, offered May 5, in New York

NEW YORK – The iconic original art for the page 10 splash page from issue #3 of Frank Miller and Klaus Janson’s The Dark Knight Returns, the comic series that almost single-handedly re-vitalized Batman, and defined the best of 1980s comics, is expected to bring $100,000+ when it comes up for auction as part of Heritage Auctions’ New York Signature® Vintage Comics & Comic Art Auction, May 5, at the Fletcher-Sinclair Mansion (Ukranian Institute), 2 East 79th Street (at 5th Ave.)

“The Dark Knight Returns is universally acknowledged as one of the most important and influential superhero stories ever published,” said Todd Hignite, Consignment Director for Comic & Illustration Art at Heritage. “Miller is arguably the greatest superhero writer/artist to work during this period, and Dark Knight is his undisputed masterpiece.”

Prior to the four-issue series of The Dark Knight Returns, Batman had lost his perch among the superhero elite. When Miller’s masterpiece debuted it created an almost instant buzz and rejuvenated Batman as DC’s most popular character. In the process it also helped revitalize the comics industry as a whole.

“This splash page, to my mind, is the single most memorable image from the entire book and the greatest image from the decade ever to come to market,” said Ed Jaster, Senior vice President of Heritage Auctions, “as well as one of the handful of most desirable pieces of original comic art from any era to come to market. This one has everything going for it and has already generated considerable buzz in collecting circles.”

The amazing piece is a perfect stand-alone image of Batman and Robin (Carrie Kelley, the first female, full-time Robin) soaring high above Gotham City, an apt symbol of the entire intense storyline.

Artwork from this famed series is much scarcer than anything else from the period, as demonstrated by the fact that Heritage has only offered two Dark Knight panel pages previously, along with the fact that any splash page – much less a such an undeniably classic image – has never been offered at auction. This gem has been locked away in a single collection since being purchased upon the series’ original publication. Unlike many pages from the series, where differences between the original art and the published version are evident, no changes were made to this artwork for publication, and the original contains no paste-ups or stats – it’s pure art, just the way it appeared in print.

“Definitive is the only adequate description of this masterpiece,” said Hignite, “and as such, it was chosen to represent the entire time period in DC’s recent 75 Years of DC Comics: The Art of Modern Mythmaking book, serving as the chapter heading for “The Dark Age: 1984-1998,” and reproduced as a glorious color full-page image, leading off the chapter on page 556.”

In 2005, Time magazine ranked The Dark Knight Returns as one of the top 10 graphic novels ever created. No less than Alan Moore, one of the creators of The Watchmen, wrote about the series:

“Beyond the imagery, themes, and essential romance of Dark Knight, Miller has also managed to shape the Batman into a true legend by introducing that element without which all true legends are incomplete and yet which for some reason hardly seems to exist in the world depicted in the average comic book, and that element is time… time has come to the Batman and the capstone that makes legends what they are has finally been fitted. In his engrossing story of a great man’s final and greatest battle, Miller has managed to create something radiant, which should hopefully illuminate things for the rest of the comic book field, casting a new light upon the problems which face all of us working within the industry and perhaps even guiding us towards some fresh solutions.”

In short, this is one of the most important pieces of original comic book art Heritage has ever offered.

Heritage Auctions, headed by Steve Ivy, Jim Halperin and Greg Rohan, is the world’s third largest auction house, with annual sales more than $600 million, and 500,000+ online bidder members. For more information about Heritage Auctions, and to join and gain access to a complete record of prices realized, along with full-color, enlargeable photos of each lot, please visit HA.com.