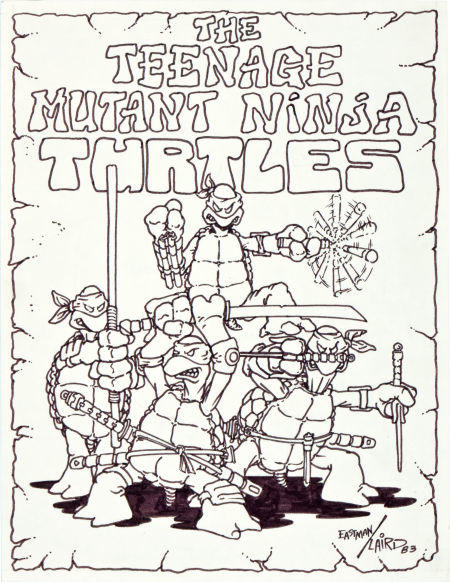 Consigned by Turtles co-creator Kevin Eastman; the first full artwork of the TMNT, which led to one of the most successful comics character franchises in history

DALLAS – The first-ever artwork of the Teenage Mutant Ninja Turtles – the illustration that launched one of the most successful character franchises in history – created for fun one night in late November, 1983 by Kevin Eastman and Peter Laird will cross the auction block as part of Heritage Auctions’ May 10-11 Vintage Comics & Comic Art Signature® Auction.

The drawing, expected to bring $50,000+, is being consigned by TMNT co-creator Kevin Eastman.

“Peter and I were sharing a studio – our living room – in Dover, NH,” said Eastman. “One work night, in an effort to make Peter laugh, I drew a sketch of this character I called a ‘Ninja Turtle’ and threw it onto Peter’s desk. He did laugh – and did a version of his own, to which I needed to take it one step further and did a pencil sketch of four different Turtles, each holding a different weapon. I gave it to Peter, who wanted to ink it in. When he did, he added ‘Teenage Mutant’ to the ‘Ninja Turtle’ part of the logo and we both fell off our chairs!”

The next day the pair decided they needed to come up with a story about the characters and began to hammer out the details, making it an homage/parody of some of their heroes and inspirations. Working through the winter of 1983-84, and after finding a local New England printer, they borrowed money from Eastman’s Uncle Quentin and we printed the first 3,000 copies, including the now legendary premiere at a local Portsmouth comic convention on May 5, 1984.

“From that day forward, through the next 30 years and through this very day, the TMNTs have been a worldwide phenomenon, entertaining hundreds of millions of children and generating close to a billion dollars in revenues,” said Barry Sandoval, Director of Operations for the Comics Department at Heritage. “There have been numerous movies, cartoons, live action shows, toys, you name it. There’s a CGI-animated show being made right now and there’s a major motion picture planned for next year. I can’t think of the last time the first artistic rendition of a major franchise has been offered for public sale. All TMNT fans have seen this piece reprinted in books and articles over the years, and I’m sure they assumed Kevin would never part with it.”

“Even to this day we still try to completely understand the reach of the turtles,” added Eastman, “and it all started with this drawing…”