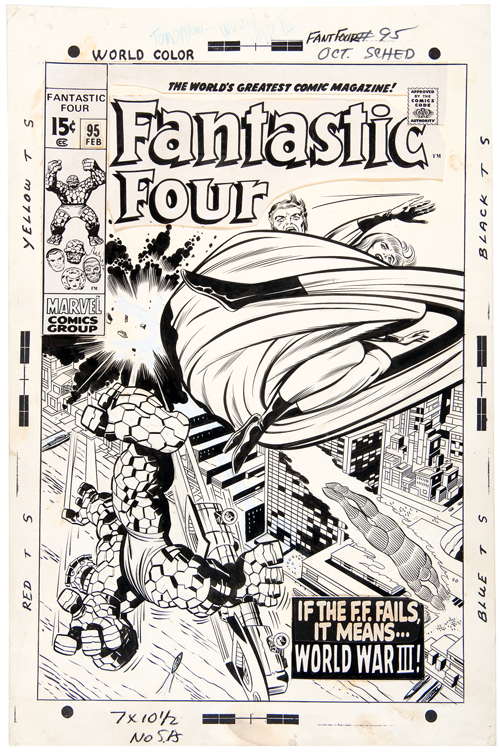 There’s no denying that Jack Kirby is one of the most prolific and influential comic artists of all time. Original comic art by Kirby is highly prized and comes with a price tag to match.

Hake’s Americana will offer up a rare original Fantastic Four cover in their upcoming auction. Originally published in February 1970, this awesome piece features everything you would want in a cover — all four original members of the team – Reed Richards (Mr. Fantastic), Sue Richards (The Invisible Girl), Ben Grimm (The Thing) and Johnny Storm (The Human Torch).

“A creative dynamo given human form, for many Jack Kirby defined with his work the very idea of what comic books should be. In his art and stories, the obvious brash doses of daring design and explosive action were infused with something more unexpected in the eras in which he worked: an equally bold excitement for the cerebral, philosophical and spiritual,” reads his entry in The Overstreet Hall of Fame.

Jack Kirby was born Jacob Kurtzberg on August 28, 1917 in New York City and he passed away on February 6, 1994. During his career, he worked for virtually every major comic book publisher. He was inducted into The Will Eisner Award Hall of Fame in 1987, and the Harvey Awards’ Hall of Fame is named in his honor.

If you’re looking for an investment-grade piece of original comic art, Hake’s has got you covered.