Got a geek in your life?  Having trouble finding the perfect gift for them this holiday season? Entertainment Earth – EntertainmentEarth.com

– a worldwide multi-channel Internet and catalog retailer of action figures, toys, bobble heads, and collectibles – has the answer with its 2010 list of the Top 10 Gifts for the Geek.

Here are Entertainment Earth’s picks for the passionate fan of all things geek: 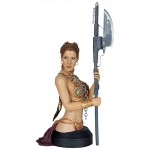 , $60 – Star Wars gets sexy with this hand-numbered collectible resin bust from Gentle Giant. Inspired by Carrie Fisher’s riveting (and rivet-full) outfit from Return of the Jedi, the captivating work stands 10-inches tall, including her Vibro Ax weapon.  She’s sure to go fast, so give the gift of Princess Leia Organa before she’s gone forever!  Limited edition of 4,200 pieces. 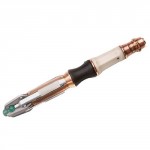 , $12 – Based on the latest incarnation of The Doctor’s handy-dandy tool in the hit BBC series, this unique light replica from Underground Toys is sure to get your family and friends out of darkness-related jams on Earth or any other planet from here to Gallifrey!  Measures about 6-inches long. 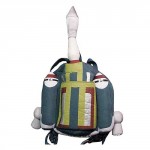 , $35 – Every kid imagines getting a rocket pack, and here’s your chance to own one.  Sadly, it doesn’t fly, but the intergalactic bounty hunter’s jet pack can store your gear while you’re at Comic-Con, school, or out hiking.  The soft plush replica from Comic Images measures about 26-inches tall. 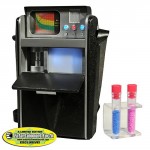 , $45 – Not only is this a low-cost replica of a prop in the original series, but some parts of it have never been seen on film before.  It’s the first look at the inside of this futuristic gadget from the watershed TV show. Incredibly detailed, the authentic 1:1 scale instrument measures 7 3/4-inches long and features lights, sounds, and the voice of the computer. 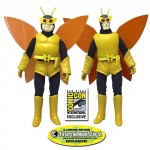 , $40 – Who would win in a fight between Anne Frank and Lizzie Borden?  That’s the kind of thing these two guys discuss on the Adult Swim series The Venture Bros.  Featuring Bif Bang Pow!’s retro, vintage-style sculpting and real fabric clothing, The Monarch’s longest-living henchmen, Number 21 and Number 24, stand about 8-inches tall in this San Diego Comic-Con Exclusive set. 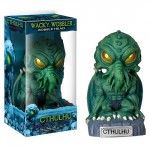 , $13 – The works of H.P. Lovecraft have inspired a generation of sci-fi and horror writers, and a bunch of toymakers. Straight from Funko and the sunken city of R’lyeh, the terrifying beast known as Cthulhu is here in bobble-head form to sit on your desk and keep an eye on your candy jar.  He stands about 6-inches tall and promises to wobble, but not gobble up your goodies! 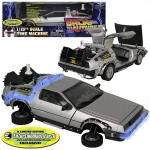 7. Back to the Future II DeLorean Vehicle – EE Exclusive

, $45 – Doc Brown built a time machine out of a DeLorean, and now you can have one!  Measuring 13-inches long and compatible with many 3 3/4-inch action figures, this limited edition Entertainment Earth Exclusive celebrates 25 years of the series in style, complete with lights, sounds, opening gull-wing doors, and pivoting “hover mode” wheels you won’t find anywhere else.  Figures not included.

, $30 – “Who ya gonna call?”  The awesome ambulance from 1984’s Ghostbusters movie is one of the most memorable vehicles of the decade.  While a full-sized replica of the car would be too big, its famous license plate has been crafted in exacting 6-inch tall x 12-inch wide detail, ready for any home or office as a magnificent decoration.  It doesn’t get much geekier than this! 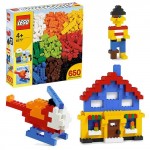 , $35 – Just bricks!  The LEGO Builders of Tomorrow Set is a box of 650 bricks in a multitude of bright colors.  No figures, no windows, no tires, no nothing to get between the recipient of your gift and creating something really fun.  The only limit is their imagination.  Heck, you could even build something cool on your desk while pretending to listen to a teleconference! 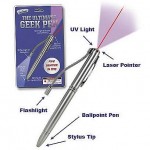 , $10 – The Ultimate Geek Pen delivers on its name.  This high-tech gadget has enough bells and whistles to make any geek drool.  A UV light, laser pointer, flashlight, ballpoint pen, and stylus tip are all integrated into this nifty silver pocket-sized contraption from Accoutrements.  What a great stocking stuffer!

(R), Inc. Entertainment Earth(R) – entertainmentearth.com – is a worldwide multi-channel retailer and wholesaler of action figures, toys, bobble heads, and collectibles with a state-of-the-art website and popular print catalog.  Founded online in 1996 and based in Los Angeles, California, Entertainment Earth offers an ever-expanding selection of over 12,000 licensed products and has pioneered best practices in the industry with innovations such as a Mint Condition Guarantee(TM), Risk Free Shopping, and Hassle Free 90-Day Returns.