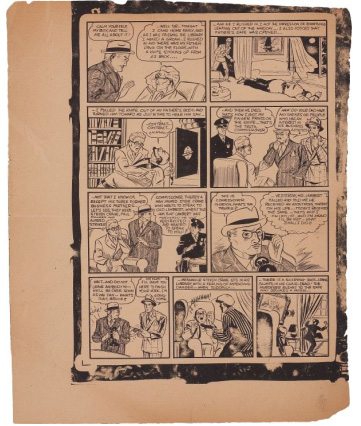 The original 1939 production proofs for pages 2-6 of Detective Comics #27, otherwise known as the first appearance of “The Bat-Man,” perhaps the closest the world will ever get to the original art for this monumental comic book – long lost, as far as anyone has ever known – will be part of Heritage Auctions Signature® Vintage Comics & Comic Art Auction, Feb. 24. The pages are estimated at $1,000+ each.

The saying, “One man’s trash is another man’s treasure” comes to mind here, as these pop culture relics were literally heading for the dust bin of history: they were rescued in 1975 from an old steamer trunk sitting on a curb awaiting trash pick-up in Rego Park, Queens. Mario J. Sacripante spied the trunk outside of the building where he lived, and where – he soon learned – Bob Kane, Batman’s creator, had also lived for many years.

“I actually knew what it was that I had found, having been around antiques and collectibles all my life,” said Sacripante. “There was enough comic history, material and original art work for me to figure out that Bob Kane had lived here long before I moved next door. I learned later that a friend’s father actually knew Bob Kane when he had lived in the building.”

The rest of the trove, which includes original Bob Kane sketches, gag panels, art class notebooks and an incomplete copy of Detective #27, are all in the auction as well.

“Holding some of these pages next to the printed comic I was struck by the details of the art that are better visible here,” said Barry Sandoval, Director of Comics Auction Operations at Heritage. “Very little original comic book art from the 1930s has survived, so this is probably the closest a collector would ever get to owning original art from one of the most collectible comic book stories ever.”

A proof page in comics is a test run of an uncolored page used for perusal by artists and writers to see how their work would look on the printed page.

Heritage Auctions, headed by Steve Ivy, Jim Halperin and Greg Rohan, is the world’s third largest auction house, with annual sales more than $600 million, and 500,000+ online bidder members. For more information about Heritage Auctions, and to join and gain access to a complete record of prices realized, along with full-color, enlargeable photos of each lot, please visit HA.com.