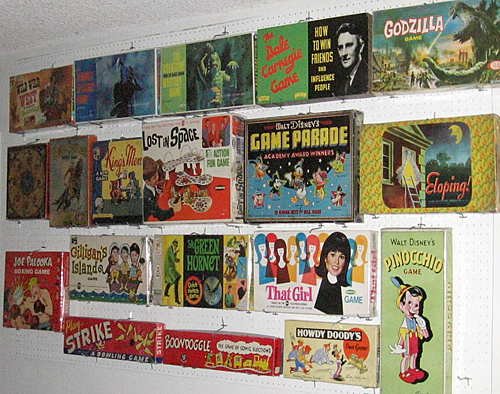 Desi Scarpone works in the Motion Picture Industry in Los Angeles, and he has a serious collecting habit. Desi is the leading expert on vintage board game collecting, and has written two books on the subject. I asked him a few questions about his collections, and here is what he had to say…

Like you, I’ve always collected things, even as a child.  My Uncle Aldo was a big collector, and I guess it’s in my genes.  As a child, I remember having to get every single Aurora Monster model made, and my Mom would drive me to the local Fedmart so I could spend my lawn cutting, baby sitting or allowance money to get the latest one.  Nowadays, I guess my focus is on board games (which I had a lot of growing up).  My collection probably started  many years later, when I was married, and I happened to be on location working on a TV show.  I visited a local shop to pass the time and came upon TIP-IT, a board game I remembered as a child.  It was a modern re-issue, but it was fun to play.  Then, months later, I happened to be at a flea market and came across the ORIGINAL version of TIP-IT from 1965…It looked so different and was so cool, and since it only cost a dollar, I bought it.  From then on, I was hooked on finding games from my childhood, and eventually, vintage board games in general.

I have approximately 6,000 games at the present time…

They’re all my children (isn’t that sick?), but I’ll admit my favorites are games like VOICE OF THE MUMMY, ELVIS PRESLEY “YOUNG AT HEART” GAME, and any of the Hasbro “Mystery” games, like THE MUMMY, CREATURE FROM THE BLACK LAGOON, or PHANTOM OF THE OPERA.

Unfortunately, most of my game collection is in storage, but I keep the most visually interesting nearby…They make me happy.  I have a big pegboard that I mounted on the wall, and inserted metal pegs in strategic places to support the games.  That way, my entire wall becomes a piece of art!

I’m getting a little nervous that most of the “holy grails” I’ve been pursuing, I’ve found, and I’m beginning to run out of things to lust after.  Besides the ridiculously rare ELVIS PRESLEY GAME, I’ve recently acquired JATI, one of the rarest of 3M games, and one of the all-around rarest games.  At this point, I guess I really wish I could find an original “Trademark” or “Patent Pending” MONOPOLY game, or Darrow version.  There’ll always be something I want, but unfortunately I can’t afford to pay a lot, so I have to wait for that rare convergence of availability and low price. 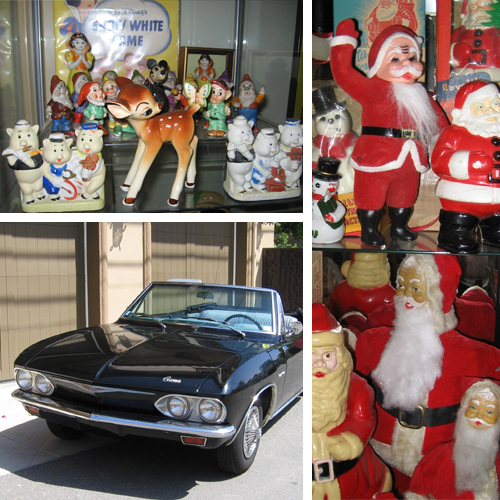 Do you collect other things?

Unfortunately, I collect a LOT of different things… I have over 10,000 records (33rpm, 45rpm and 78rpm), I have lots of vintage paperbacks, magazines, monster models, banks, ceramic figures, Santa figures and Christmas trees, halloween costumes, road race sets, first edition books, coins, stamps, vinyl figures…I have an extremely large collection of vintage Disneyana, vintage toys, battery operated toys, “big plastic” toys like THE GREAT GARLOO and ROBOT COMMANDO… I collect vintage cars, but I’m down to one 1965 Corvair Corsa Turbo convertible…. Mostly I collect what interests me, and what I find visually appealing.  When I write it all down like this, it kind of scares me.

Usually they all revolve around finding something rare very cheap…I found almost all my monster models at the same place, same time very cheaply.  I found a very rare Bob’s Big Boy ashtray at a garage sale (no BBB collector has seen it before).  I guess I can share a BAD collecting experience.  Growing up, I collected Comic Books, and I had a large collection.  As I got older, I was pressured by my Mom and girlfriend to sell them, and “be a man”.  I eventually relented, sold them, and bought a car…I had entire runs of Fantastic Four #1 through date, X-Men #1 (mint) through date, etc…If I had them now, I could have bought a freaking HOUSE.  The point is, I didn’t want to sell them, I had no reason to sell them…Because of this, I’m pretty resistant to pressure to sell my collection now.

For me it’s always been about the thrill of the hunt…I love going to swap meets and finding the rare jewel, or even collectible shows (when they still had them) and finding something cheap and desirable that others had missed.  I’m not sure if it’s a competitive thing (as I certainly wasn’t competing against anyone)…It was just fun.  One piece of advice I would pass on that was offered to me was, go slowly… It’s very easy, especially now with Ebay, to go crazy and buy everything and anything… But it’s better to use restraint, and your finances will thank you for it.  Collect what you like, but if I were you, I’d keep an eye to re-sale value as well.  While it’s true that if you can buy the best and mint-est examples of things, there’s a pretty big (and growing) market for lesser condition items.  I’ll often buy something in pretty rough shape just to get it in my collection, and upgrade later when I find a better one.  Then I sell the rough one to you! 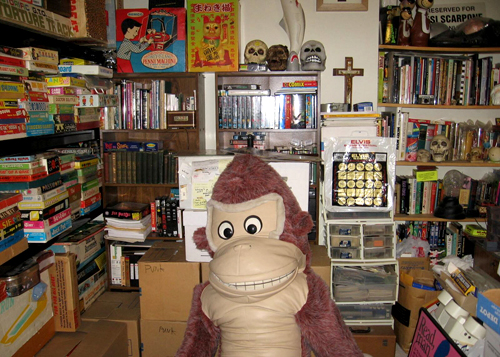 Desi Scarpone has written two books on Board Games, both published by Schiffer Books. The first one is called BOARD GAMES, the second one is cleverly called MORE BOARD GAMES. Both have thousands of color photos of games, along with brief descriptions and prices.  The first book has been re-issued with updated prices.  You can order them here: 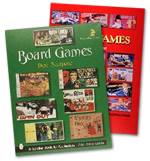 He also has a board games website that’s pretty fun.  There’s lots to go through there, and he even sells some of his duplicate games, toys, and board game magnets on the site: