I first learned about Dan Bru’s amazing collection through his photos on Flickr, and then through his Etsy shop where he sells some of his artwork. Dan lives in West Paris, ME, but has roots in Mobile, AL. He is a happily married graphic artist with two awesome boys, and someday hopes to reside in Maine during the Summer and run a comic/toy shop with a full bar and art gallery in Gulf Shores, Alabama in the Winter. (“It gets too damn cold up here for this southern boy!”)

You can follow Dan’s adventures on his blog; http://www.3-dmonster.com/, and he is also developing a new social network that will soon take over the world; http://planetmytown.com/. Now prepare yourself, because what you are about to see is real… incredible!

How did your collection start? What was the first item in your collection?
I started collecting seriously when I was 12. We had a comic shop in a neighboring town called “The Fantasy Shop” (yeah, I’m sure alot of folks coming in weren’t looking for comic books). I was an avid comic book reader since the age of four, and always took great care of my comics, and by the age of 12, I already had an impressive collection. When I found “The Fantasy Shop”, it was like an epiphany! I couldn’t believe I could find all of the back-issues that I had been missing – I remember they had a great silver and bronze-age collection, and this was 1984-85 when you could still get great silver-age books for under $10! I remember my first purchase was Amazing Spider-man #146 in VF condition for $.50. It was a great Scorpion appearance!

At that time, I still had most of my Mego, Star Wars, and monster toy collection from childhood, and was still very much into GI Joe and Masters of The Universe much to my Father’s shame. Later that year I started collecting toys seriously as well. I remember going into a “Children’s Palace” toy store in early ’86 and finding a whole rack of French carded Mego superheroes’ on clearance for $2.99 each! I bought two of each – one to keep in the package and one to take out, and to this day, I have no idea where the Hell they went! I had a big toy & comic yard sale when I was in high school and was too cool for toys and comics anymore, and I think that’s what happened. Boy, I wish I could go back and bitch-slap my 17 year-old self!

Approximately how many items are in your collection?
Toys and comics? Wow that’s tough! Probably around 10,000 pieces or so. 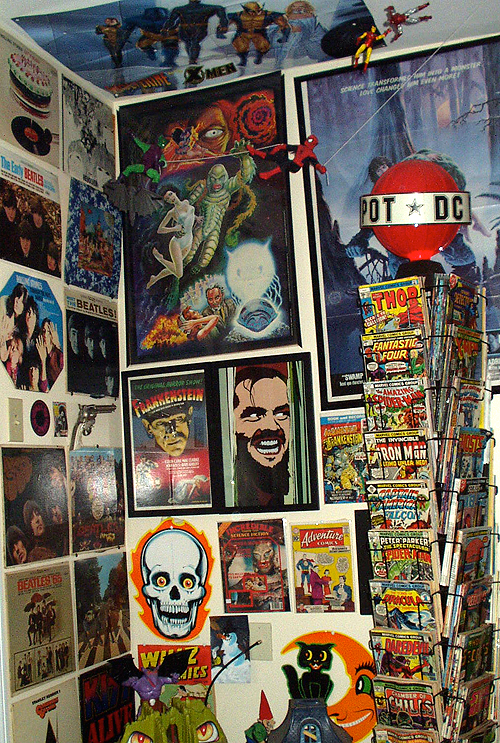 Do you have a favorite item in your collection?
My comic-book spinner rack with light-up “DC Depot” topper. I looked for one for three years or so before finally finding one. I have it filled with comics from 1976-77; about the time I started buying them. Alot of the comics on the rack are copies that I bought way back then. 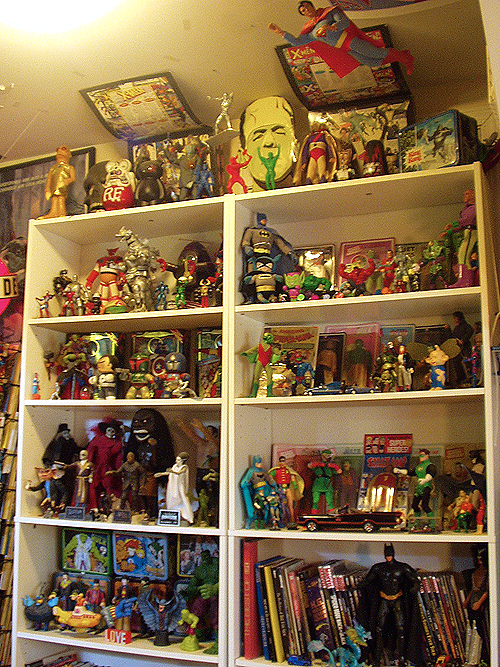 How do you store/display your collection?
HA! Any way that I can! Right now, nearly every square inch of my office is spoken for. I have my comic boxes stacked to the right of the room, my toys are perched mostly on two big shelving units, as well as just about any flat surface in the room. I even have a few flying characters suspended from the ceiling by wires. I also have some comics, magazines and carded toys hanging from walls.

The stuff I don’t have room for is in boxes on the floor and in the closet. I’m currently planning to turn the adjoining unused bedroom into a secret hidden game room with more of my collection on display. It will only be accessible through the tiny closet in my office.

Is there a “holy grail” item that you would love to add to your collection?
a 1966 Batmobile replica from Gotham Customs will be my first purchase when I sell my social network for billions. A boxed Kenner Alien would be great, as well as a decent copy of Amazing Fantasy 15 (1st Spider-Man). Other than that, more boxed and carded Mego figures, a boxed Bigfoot from $6Mil Man and a boxed Grendizer Jumbo Shogun Warrior.

Do you collect other things?
I collect pretty much anything that catches my eye. Toys and Comics are my biggest passions, but I also collect original art, statues, vintage tin lunchboxes, Movie posters, misc. horror & sci-fi stuff. Mid-century modern furniture and Tiki stuff ranks pretty high, too. 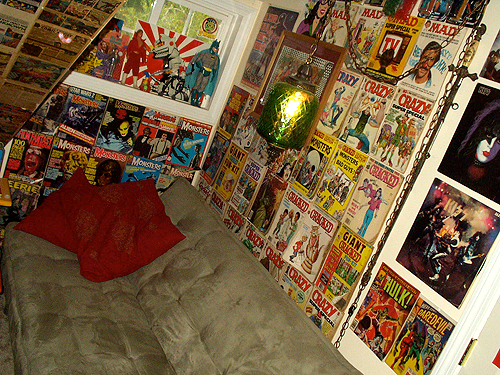 Do you have a favorite collecting story or experience?
Probably finding those carded Megos for $2.99 each! Other than that, I’m a HUGE Metallica fan and used to tweet back and forth with Kirk Hammet about collecting toys and old EC horror comics. Super- awesome guy!

Do you have any advice for new collectors who are just starting a collection?
ENJOY IT! Don’t buy anything because you think you can make money on it later! Buy it because you love it! And don’t be one of these guys who freaks out if his “limited edition TMNT Donatello-dressed-as-a-gynecologist” gets a ding on the corner! Also, break that golden-age Batman comic out of it’s vacuum-sealed plastic prison, give it a good strong sniff, and read the damn thing!! (very carefully, though)

A huge thanks to Dan, for sharing his collection with us. You can follow Dan on Twitter @Danothemano36 or on Facebook, and be sure to check out his blog for even more great photos of his collection.

(All photos are the property of Dan Bru)