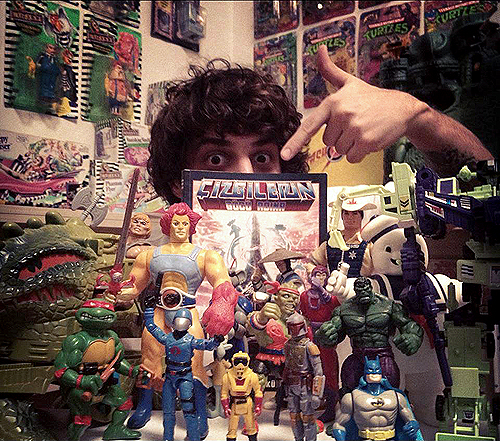 Can Evrenol is a filmmaker, born and raised in Istanbul, Turkey. He filmed short horror films during college, and is now shooting commercials for TV. He’s hoping to shoot his first horror feature soon. Can has an awesome collection of toys and action figures and graciously invited us all to take a tour… 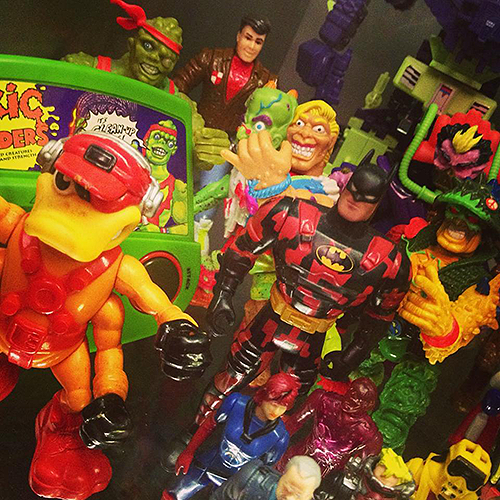 I was born in 1982. At the time, my country had a single government channel. Western TV shows, movies and toys came with a delay of a year or two, sometimes even more. My love for action figures started with Star Wars at the age of four, then came Masters of the Universe, GI Joe, Transformers, and TMNTurtles… Those were the 5 big toy lines all kids played with in 80’s and 90’s Turkey! The first item in my collection wass Darth Vader, bought by my parents.

Back then, these figures were a window to a boy’s fantasy world. They had a mission unlike the figures of today–there was no internet, no youtube–I didn’t even have a VCR until I was 7. These figures were the only avatars to a myriad of fantasy worlds, be it a post-apocalyptic world, espionage in space, or even a European soccer final game! I would re-enact AC Milan vs Real Madrid game with just a single Viper figure. I would pose the figure passing, lobbing, heading and celebrating a goal. 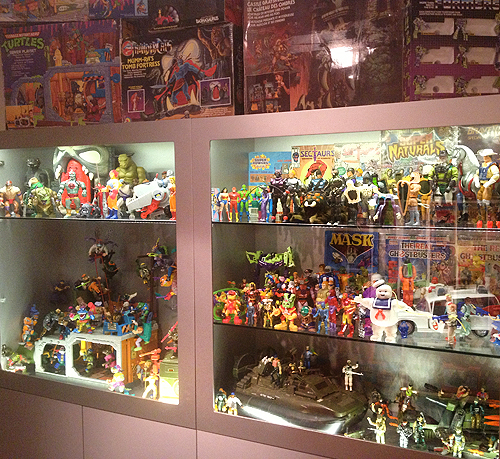 I liked LEGO too, but GI Joe’s and MOTU’s provided naive but visceral details to vast sci-fi and horror fantasy worlds in a boy’s head. I guess the Conan elements in MOTU, and the sci-fi edge of GI Joe, was what I was attracted to most. These figures were my whole world. I would take them with me if I was going somewhere with my parents. Having them in my living room and in my ‘cave’ room, makes me feel very close to my childhood, in a constant state of nostalgia, with a smile on my face. 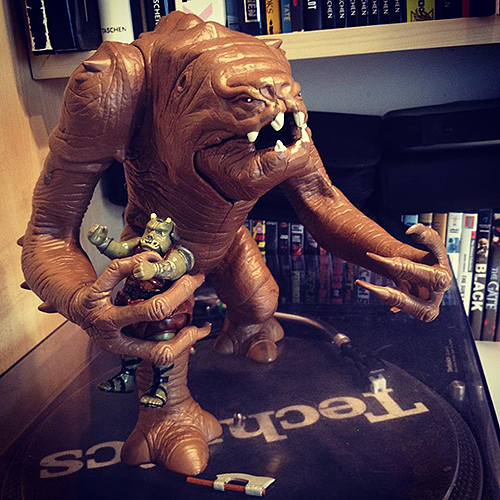 However, at the time I wasn’t keeping a collection. I was playing with the toys with all my heart, and then forget them when a new line of toys hit the stores. So, just like 99% of my friends, my parents gave my unwanted old toys to other kids in the neighborhood–with my consent. 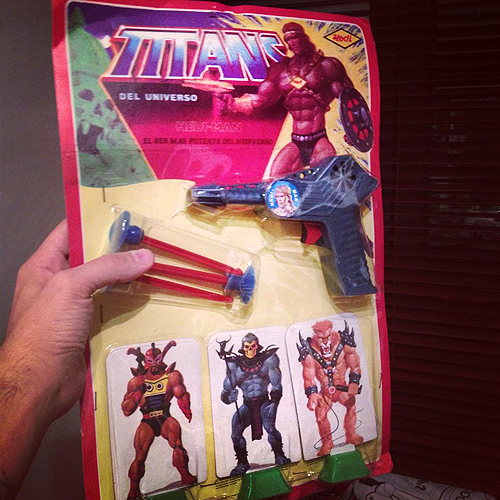 I was 20 when I came across some Thundercats action figures on eBay. When I was a kid, there was no Thundercats toys in Turkey, but Thundercats was on TV and it was my all time favorite show. So, I was tempted to bid on those figures, almost as if I was buying them as gifts for my 8 year old self. I bought a couple and stopped.

Then, when I was 29, I started to spend hours and hours on eBay, hunting for any 80’s/90’s action figures as if I was on a crusade. First, it was the toys I had as a kid. Then it was the toys I wanted,  but my parents didn’t buy. Then it was my favorite TV shows which I never even knew had a toy line (like X-Men, Toxic Crusaders, Barvestarr, Flash Gordon, Robotech, Bot Masters, Captain Power etc…), and finally, it was figures I never knew about (like Sectaurs, Inhumaniods, Supernaturals, Rocks, Bugs & Things etc…) That is how my collection really started, only two years ago. 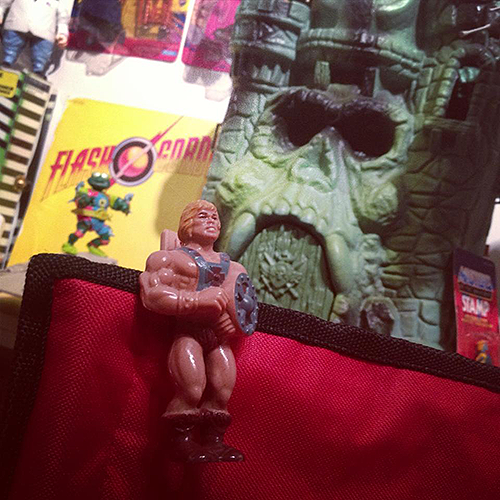 Loose figures are on display in cupboards, and shelves. Boxed items are hanging on the walls. 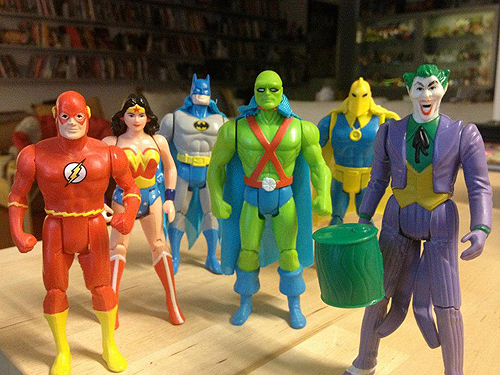 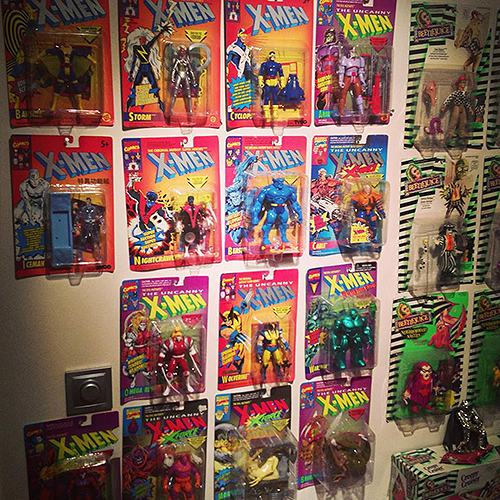 1987: I remember having secretly kissed and touched Princess Leia Bespin Gown figure at the age of 5 🙂

2012: I found an action figure in a random vintage store in Istanbul. It was the craziest and weirdest figure I’d ever seen! I went home and googled what was written on the figure’s back. The first link that came up read: “Top 10 craziest non-turtle Teenage Mutant Ninja Turtles action figures!” It was Mutagen Man. 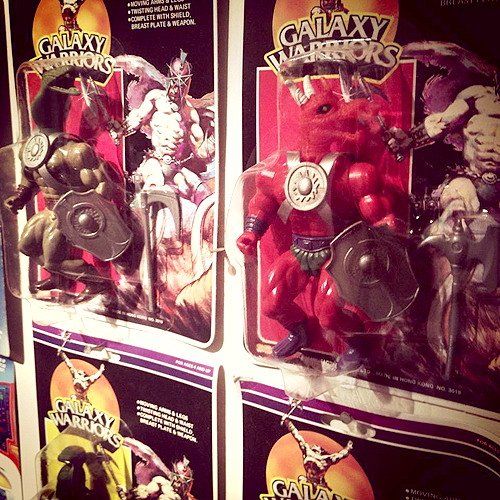 Be Afraid! Be Very Afraid… 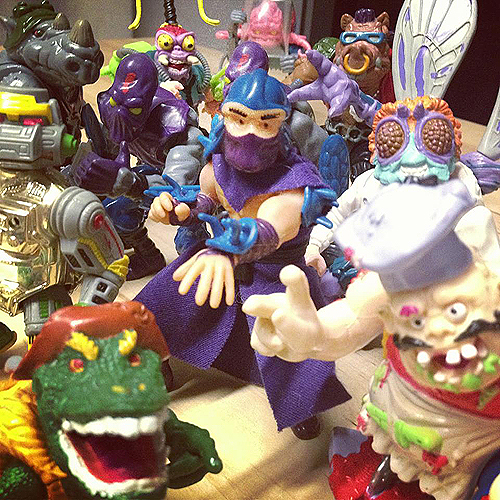 A huge thanks to Can for sharing his awesome collection with us. You can connect with Can over on his website.

(All photos are the property of the photographer.)