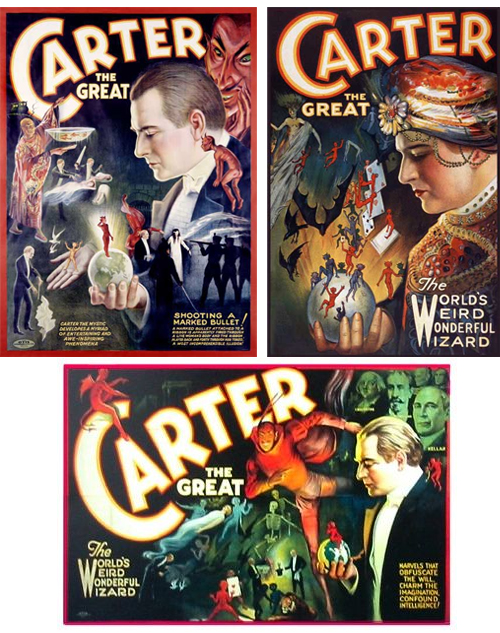 Charles Joseph Carter (1874 – 1936) was the American stage magician, known as “Carter the Great.” During the heyday of magic acts in the U.S., Carter gained his greatest fame abroad. Among the highlights of Carter’s stage performances during his career were the classic “sawing a woman in half” illusion (an elaborate surgical-themed version with “nurses” in attendance), making a live elephant disappear and “cheating the gallows”, where a shrouded Carter would vanish, just as he dropped at the end of a hangman’s noose. (Thank you Wikipedia!) I love this stuff. Now we have David Copperfield and disappearing 747’s. Yawn.

The artwork on the Magic posters of the early 20th century is just incredible. If you have a chance to see one in person, don’t pass it up. The colors are so vibrant even a century later. An original poster like he ones pictured above will set you back a few grand, but you can find cheap repros all over eBay.