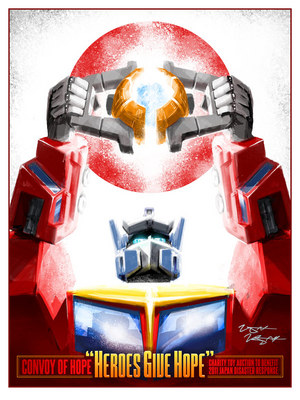 In the wake of numerous natural disasters throughout the early part of this year, the virtual world has heeded the call to help out the real world in it’s time of need.  Almost as soon as the news was released about the devastating earthquakes throughout Japan, online communities began to rally around the cause. On Facebook, Twitter, and across thousands of blog sites and internet forums, many began asking what they could do to help. As later reports of the Joplin tornadoes and East African drought began to make their way into the media, it became clear that action would be needed.

In response to these crises, A group of comic and toy artists have banded together to donate their talents to the “Heroes Give Hope” charity auction.  Through the auction of these works of art, the Pop Culture community is raising funds for ConvoyofHope.org‘s continuing disaster relief  efforts.  These dedicated donors from around the world have each offered up many one-of-a-kind pieces to be sold of in this unique auction, with 100% of the hammer price of each going directly to Convoy of Hope.

Named after the truckloads of supplies they bring to disaster areas throughout the world, Convoy of Hope has provided aid to more than 45 million people in over 100 countries since its founding in 1994.  In addition to their continuing relief efforts in Joplin, East Africa, and Japan, Covoy is still providing volunteers on the ground in such recovery areas as Haiti and New Orleans.

Using the internet and social media, organizers at internet auction site TheBigToyAuction.com have been able to make this event a truly global effort.  Donations have included artwork from South Africa, the UK and Canada and custom toys and Figures from around the U.S. and as far away as Germany, Puerto Rico, and Australia. To further denote the community nature of this event, donations were accepted from both amateur and professional artists alike, to symbolize the spirit of the “Everyday Hero” which is the theme of this event. 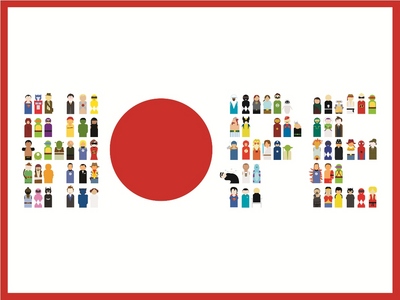 There are custom figures from nearly every genre, including X-Men’s Beast and DC’s Nightwing from MintCondition Customs and Juancustoms, custom Boba Fett and Destro bootlegs from Suckadelic Toys, a custom cast and packaged Back to the Future Hot Wheels vehicle from John Spangler, the limited edition U.R.I.-NAL 9000 vinyl robot toy from Hauke Scheer, a Hand Made resin Micronauts bootleg custom from Austin Richards, and even a Diorama featuring characters out of the classic Japanese horror movie “The Grudge,” from Sasha Customs.

Most items have an opening bid of either 3.11 or 5.22 as a reminder of the dates of the Sendai earthquakes and Joplin Tornadoes, respectively.  However, bidders are encouraged to bid high as 100% of the Hammer price of each item will go directly to the relief effort.  As with other TheBigToyAuction.com live-auction events, this auction is using the Proxibid streaming platform to simulcast the event, allowing online bidders to place their bids against one another and the floor in
real-time. Online pre-bidding has already been strong in anticipation of the event as word has begun to spread through Facebook, Blogs, and Twitter feeds.

The Live Auction event kicks off Saturday, August 20th, starting at 3:00 PM EDT.  Registration and Pre-Bidding are already open online at http://TheBigToyAuction.com/beahero.html.  Interested Donors can contact TheBigToyAuction.com via their website to donate items for the event.

Convoy of hope is also accepting donations directly through its website at ConvoyofHope.org.