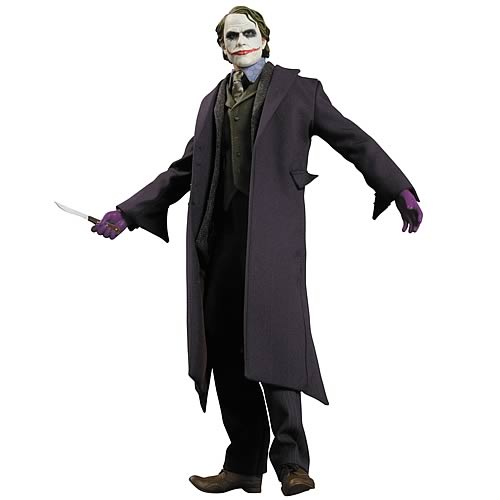 “Look at me!” Don’t look now, but the Joker is back. And he’s scary! This intimidating, 1:6 scale action figure of Heath Ledger as the Clown Prince of Crime stands 13-inches tall in his authentically reproduced fabric costume and almost-too-lifelike expression. The Joker features 28 points of articulation and comes with a display stand and film-accurate accessories. It takes courage to buy a figure like this and bring it into one’s home. Do you have the nerve to do so? Limited edition.

The Dark Knight reunites director Christopher Nolan with star Christian Bale, who returns to continue Batman’s war on crime. With the help of Lieutenant Jim Gordon (Gary Oldman) and District Attorney Harvey Dent (Aaron Eckhart), Batman sets out to destroy organized crime in Gotham for good. The triumvirate proves to be effective, but they soon find themselves prey to a rising criminal mastermind known as the Joker (Heath Ledger), who thrusts the city into anarchy and forces the Dark Knight ever closer to crossing that line between hero and vigilante.