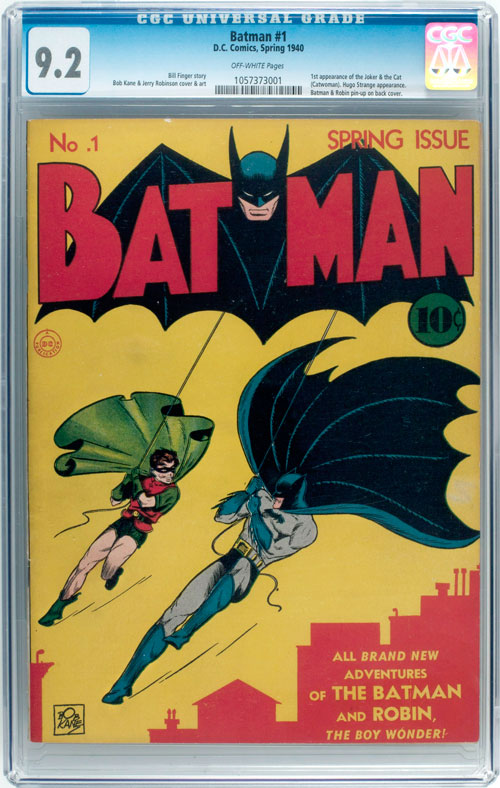 Image provided by Heritage Auctions, shows the 9.2 CGC-graded copy of Batman #1 (1940), which sold to an investment group for $850,000 last week, a record price for the title. Photo courtesy of Heritage Auctions.

“Psst. Hey buddy, wanna make a ton of dough? Buy comics.” This is probably not investment advice you would have pounced on 72 years ago, but if you had spent a single shiny dime on Batman #1 and put it away for a while, you could sell it today for a fortune.

Heritage Auctions (HA.com) sold a copy of the Batman #1 comic book for a record-breaking $850,000.  The comic book originally cost 10 cents when it was published in 1940.

“The collector paid $315,000 for it about two years ago, and that was the record at the time for a copy of Batman #1, one of the most important comic books in the hobby. The market for high-quality, classic comic books has really skyrocketed over the past few years,” said Ed Jaster, Vice President of Heritage Auctions.

The identities of the seller and the investors who purchased the comic book were not revealed.

“The Batman character first appeared in Detective Comics #27 in 1939, and was so popular he got his own comic book series the following year.  This particular copy of Batman #1 is the finest known surviving example, graded near-mint condition 9.2 on a scale of one to ten by Certified Guaranty Company (CGCcomics.com),” said Jaster.

Batman #1 introduced the first appearance of two other familiar comic book characters, the Joker and Catwoman.