Mike and Frank are picking in new York again and visit Dave Savage, who has “tonnage.” Dave bought a decommissioned freight train station and has filled it with 60 cars he’s bought on eBay

. The cars are sandwiched in so tight that Mike and Frank have to literally climb on and over them to get through the building.

All of Dave’s prices are pretty high, since he’s trying to get back at least what he spent on his treasures. Mike and Frank aren’t able to buy any of the cars so they all visit another building Dave owns. The door to this building is covered in bees and once they get inside, all Mike and Frank can find are a bunch of mildewed National Geographics and stacks of scrap lumber. After this second strikeout, Mike and Frank are getting frustrated but agree to visit one more of Dave’s buildings, which is a half hour away. 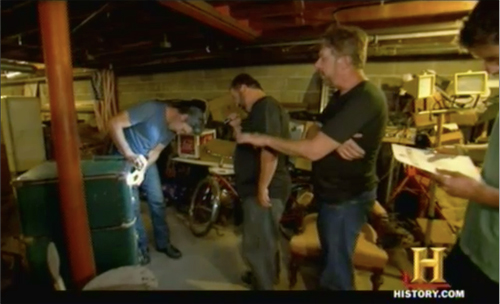 This last building looks a bit more promising, but it soon becomes clear to Mike and Frank that it is probably another bust. Mike finds a large leather trunk that is locked. Dave says he bought it at an auction and never bothered to open it, so he has no idea what is inside. There are stickers of Italy  and 1955 all over it, and Mike is intrigued enough to spend $50 on it.

Mike and Frank head to New Hampshire for some freestyle picking. They see a house with a 1915 Harley Davidson motorcycle mounted on the roof, so naturally, they have to stop. The house is owned by a happy couple, Tom and Maureen, who collect pinball machines, video games, shooting galleries, photo booths, and all kinds of other cool things. I could definitely hang out with those two. The crown jewel of their collection is a rare Official Baseball pinball game. 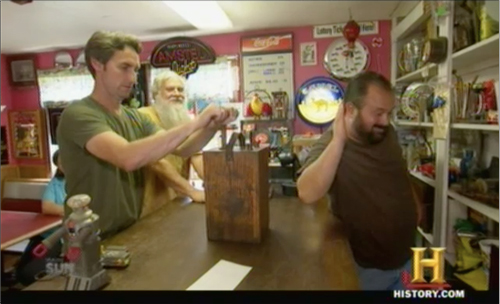 Frank likes a Hi-Ball game he finds upstairs. this is an early arcade game that is kind of like a vertical skee-ball or a large bagatelle game. He buys it along with a vintage Coca-Cola display sign for $250. Mike buys an old TNT Fidelity blasting Machine plunger box for $150.They make multiple offers on the Harley on the roof, going as high as $2,400, but it’s not for sale.

Out of all the places the pickers have visited, the next stop is probably the one place I would choose to visit and pick through more than any other. Paul is an auctioneer and the son of an auctioneer, who has amassed several buildings full of incredible items. At one point, Paul bought an entire carnival! Mike likens Paul to Joe Dirt, due to his mullet, which I think is a bit of a low blow. Paul seems like a good dude and I’d be happy to have a beer with him. 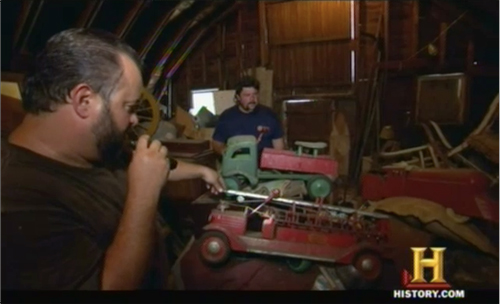 Mike finds a Triumph 1967 Bonneville motorcycle and buys it for $3,500. The first building they pick through is the most packed building I’ve seen on American Pickers, and that’s saying something. Frank finds some old toys including a Keystone firetruck and buys all five for $250. Mike climbs into the attic and finds a rusty old metal guitar and buys it for $100 along with an outboard motor for $50. Mike and Frank go on to buy a bunch of items, since Paul has so many great things and his prices are extremely fair.

They go to yet another building — this one hasn’t even been opened in 15 years — and like the others, it is crammed full of treasures. Frank buys three porcelain automotive signs for $325. Mike finds an old gambling horse racing game that looks like a piece of folk art. Paul wants $300 and won’t go any lower, but Mike really wants it and agrees to the original asking price. 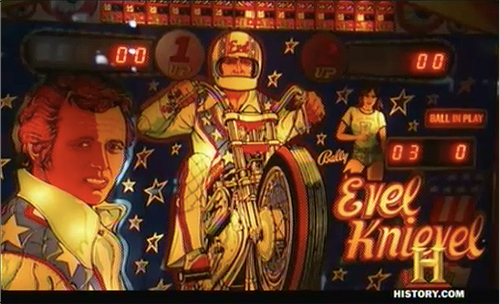 Frank is enamored with an Evel Knievel pinball machine (and who wouldn’t be?). He has dreamed of owning one of these since he was a kid. Paul doesn’t really want to let it go, since it’s always been one of his favorite things. Frank finds another old pinball machine that has been sitting under a leaking pipe for years. This one is from the 30’s, and Paul wants $300 for it. Frank gets Paul to grudgingly sell both the Evel Knievel and the vintage pinball machine for $1,100 combined.

Mike and Frank leave Paul’s place with a truckload of goodies. They visit Todd, an appraiser, to see what they can learn about the horse racing game. Todd tells them it is an H.C. Evans carnival gambling machine from the early 30’s. When you crank machine, the ponies move. All the horses and riders are hand carved and painted, making it truly one of a kind, and the game is probably worth $2,500 in its current condition. 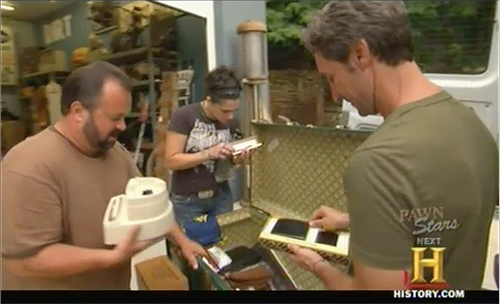 The guys return to the shop to find Danielle waiting for them with tools in hand, so they can finally open the mystery trunk they bought at the beginning of the show. Inside, they find an assortment of items from Italy including a gondola model, and a blender, which Frank quickly claims.

There were some really amazing items found in this episode. It started a little slow, but picked up rapidly. I loved seeing all the vintage arcade games and pinball machines. What did you think? Did you see anything you would like to add to your collection?