Mike and Frank find some really great items in this episode, including one particular Batman toy that I have been seeking for quite a while.

The pickers are freestyling in Ohio and come up with the idea to trade one of their previously picked items and try to end up with a more valuable item that they might actually be able to sell. The item they start with is an antique drinking cup dispenser they got from “Gordon’s Goldmine,” which has been sitting on a shelf ever since they bought it.

They guys stop the van after seeing a lime green taxi cab for sale on the side of the road. The house that belongs to the cab is leaning at a fairly extreme angle, and is owned by Will, a young guy with a rad mustache. Will’s dad was an auctioneer and accumulated a ton of cool stuff in his leaning house. 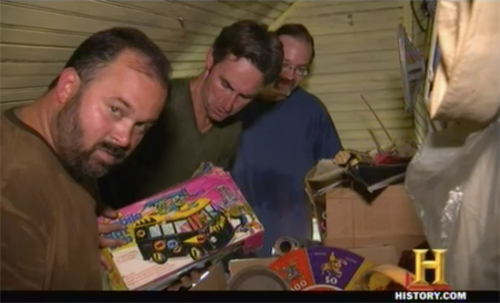 Mike finds an old Harley Davidson helmet, but when they find this 1975 Mego Mobile Bat Lab, I was flinging fists in the air. I love that thing, and have been on the lookout for one since I saw one on eBay a while back. Mike absolutely robs Will by buying the Batman van in its original box for $25. The original figures and accessories were also in the box, and those can easily fetch more than $25 each. (The Pickers sold the van for $200.)

Frank finds an M. Hohner accordian and buys it for $30 — totally worth it, considering how much the noise annoys Mike in the van later. Mike finds a trunk filled with vintage chalk figures, and buys an Uncle Sam and a soldier for $65. The Uncle Sam figure is really nice, and I think the price was a steal, but I don’t know anything about chalk figures to know if it was a good deal or not. 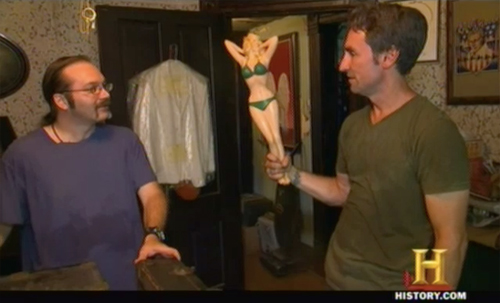 Mike then finds a 1950’s water bottle in the shape of a bikini-clad woman — an item that would certainly look great in any man-cave — and buys it for $30. The bottle is probably a Jayne Mansfield item, so its value would be a good bit more than that price.  Mike also buys a box lot of vintage nodders and bobble heads for $50. 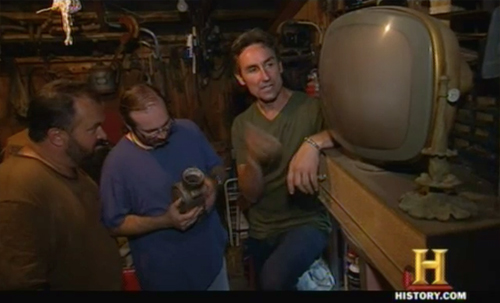 At this point in the show, I started to feel really bad for Will. It felt like Mike and Frank were double-teaming him while the Hollywood lights were blinding him. The icing on the cake comes when Mike tries to trade his cup dispenser for an old Philco Predicta television. Mike definitely used some Jedi mind tricks on Will to get him to agree to this trade.

The Pickers walk out with some excellent items without spending much. ((Will, you have some amazing items and I want to come to your house if you have anything left, but I’ll give you fair prices!)

Mike and Frank hear from Danielle about their next lead. Ted is a collector with three buildings full of amazing items. He has never sold a thing, and his kids aren’t interested in all the things he has collected, so he has decided to sell it all.

Mike is instantly drawn to an old, faded, beat up Beechnut chewing tobacco poster that features baseball greats Dizzy and Paul Dean, who played for the Cardinals, and buys it for $425.

Frank buys a box of vintage toy guns, holsters, and chaps that are actually from Ted’s own childhood. This kind of thing drives me crazy, because I could not put a price on owning a toy my father or grandfather played with as a child. I don’t come from a family of “savers” and everything got tossed once its usefulness ran out, so I have very few physical items from my family’s past, but those items that I do have are “worth’ more to me than just about anything else I own. I hope when I get older and grayer, my kids will appreciate my treasures just a little bit. Sell most, but hold on to a few things to remember dear old dad.

Mike finds a tray of rubber food from an old “Dog n Suds” drive thru and buys it for  $50. He thinks it would look great hanging on the window of a classic car at an auto show. I agree.

Frank buys an old music box with a crank handle for $300, and another great pop culture item — a Fonzi pinball machine — for $75. The guys go on a shopping spree, and fill the van with all kinds of vintage goodness.

Mike is interested in a saxophone with its case, but doesn’t want it for $110, so he offers to trade the Predicta TV for it. Ted is not interested at all, and wisely sticks to his guns. I really don’t see the value of having a bulky old TV that doesn’t work. I guess there are enthusiast who buy these and fix them up, but then what? I’ll take my big flat screen any day.

This episode is on a roll with great guests and great items, and the trend continues in Illinois, where they visit Tim, a Volkswagen enthusiast. Tim is a laid back dude with a good attitude — someone you’d want to have a beer with. He has a junkyard of old VWs on his property and Mike is in Heaven. Unfortunately, all the cars and vans are in really bad shape — even for the Pickers! 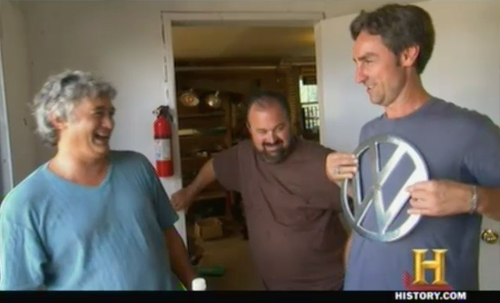 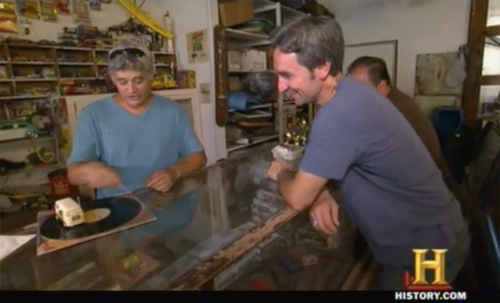 Tim shows Mike a “vinyl killer,” which is a VW toy bus that actually plays records. Of course, it also scratches the record, but Mike buys it for $50.

Tim has a cigar box full of fractional sales tax tokens from the 30’s. Mike doesn’t know anything about these, but smells a bargain. He offers to trade his TV, and Tim agrees. I really liked the idea of the trade-up, since that is something all of us collectors do, intentionally or not. It was a fun twist that I wouldn’t mind seeing again. 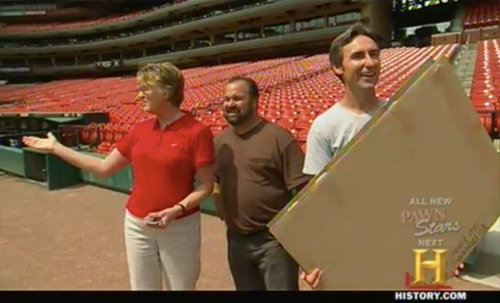 Mike and Frank head to St. Louis and meet with Paula, the curator of the Cardinals Museum, at Busch Stadium, and they get a VIP tour of the field and dugout. Seeing how excited Mike and Frank are to be there, reminds me why I like these guys so much. They really are just two working guys that haven’t let Hollywood affect them (too much).

Mike wants to know what his Beechnut poster is worth, and Paula tells him that if the poster was in mint condition, it  would be worth around $5,000. Their copy is in rough shape, but would still fetch $800. Paula introduces Mike and Frank to Bill DeWitt, the president of the Cardinals organization, who actually has a mint condition version of the exact poster hanging in his office. 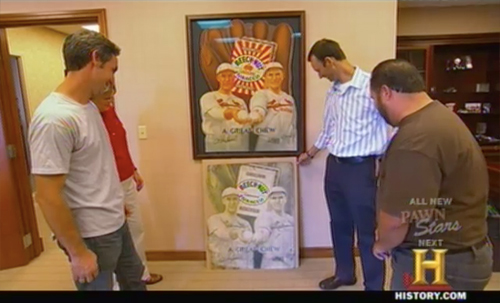 After getting back on the road, Danielle calls to tell Mike that the tax tokens he traded for are worth around $400. The guys splurge on the good news and buy a back massager for the van.

This was a great episode, filled with pop culture goodies and some pretty cool folks. before I die, I want to experience one of these “dream picks” where everything is cool and everything is cheap. Did you see anything you’d love to have for your collection? Add a comment below.