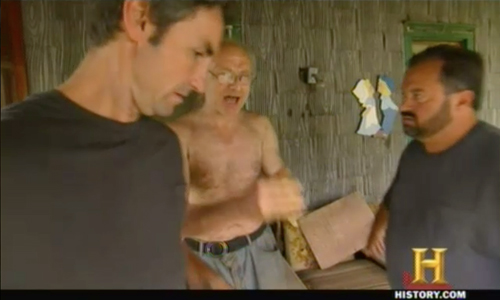 The pickers start this episode with some freestyle picking in upstate New York. The first house they stop at, has this guy who is fairly unhappy to see them. He crumples their flyer and runs Mike and Frank off his property. It was kind of funny, but it makes you realize that this probably happens more often than not, and if you were inclined to do some picking of your own, this kind of reception might be a reason to think twice.

The next stop is much more receptive to Mike and Frank. Kathy has inherited her father’s farm and his 14 trailers of accumulated items. Her father was a POW in Japan in World War II where he had everything taken from him. When he was freed, his mindset was to hold onto everything, and that’s how he came to own so many things. He passed away recently and Kathy and her husband want to sell some of the items to be able to pay off some of the debt on the property.

Mike finds a pile of old wood rimmed bicycles from the 1890’s and buys the lot of them for $250. Kathy’s husband, Bill, shows up and, luckily for the pickers, he is happy to get rid of some items too.

They continue to explore some of the trailers and find a 1930’s Harley Davidson motorcycle gas tank, and buy it for $100 bundled with a stereo and a gas cap. The coolest find was a vintage art deco microphone with its original stand. Mike buys the microphone along with an old  theater spotlight for $250.

Mike and Frank hit the road, and get a lead from Danielle. Al is in the business of cleaning out old buildings and has just purchased an old cheese factory that has been boarded up for decades. Mike and Frank can’t even find a door, so they ask the fire department across the street if they’d like to practice breaking into a building. The firefighters rise to the challenge and use their axes and chainsaws to make a door for the pickers. 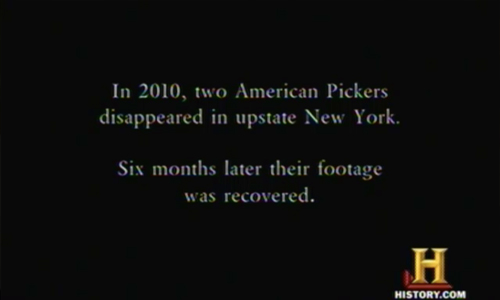 Mike and Frank go inside the building which looks like a tomb. It’s completely dark and spooky, and they feel like they are starring in the Blair Witch Project. Inside the building are some old cars, including a rusty 1948 Fleetmaster 500 without an engine. Al wants $1,500 for it, while Mike was expecting $100, so there’s no deal to be made there. 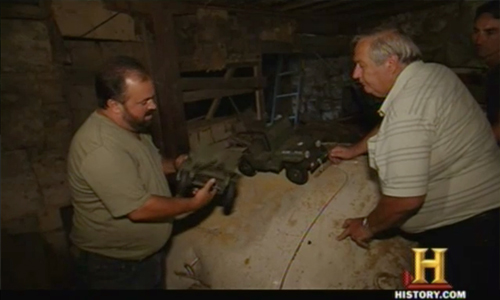 The building is filled with trash and raccoon turds, but Mike manages to find an ornate iron plant stand and buys it for $20. Frank buys a terra cotta chimney top and a bundle of fishing poles for $25. He also buys an old handmade wooden thing for $10 — unfortunately we never learn what it is. The pop culture find of this episode is a GI Joe jeep and trailer, which Frank buys for $20. 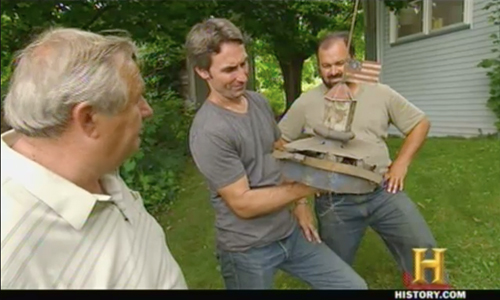 The last item found is an old tin carousel toy that Mike says “looks like a horse stepped on it.” It is an 1899 Osmond’s merry go round, and Mike buys it for $40.

Mike and Frank get back in the van and go on a quest for an octagonal house. They find the 1856 home and its owner, Marlene,  and her daughter, Julia. These two are selling the house and have tons of vintage clothing and military uniforms, among other things. Mike and Frank get a quick tour of the home, which was once a stop on the underground railway, and they explore all of its hidden rooms and passageways — what an amazing place to live! 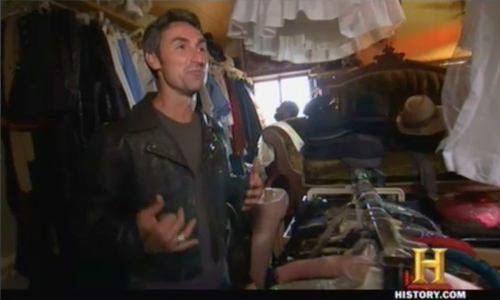 After the tour, the guys start looking for items to buy. Of course, Mike is able to find vintage motorcycle gear among all the frilly dresses. He buys a leather Harley jacket, straight out of On the Waterfront for $100, and some motorcycle helmets for $30 each. He also buys a vintage rodeo outfit with a white leather fringed jacket for $250. 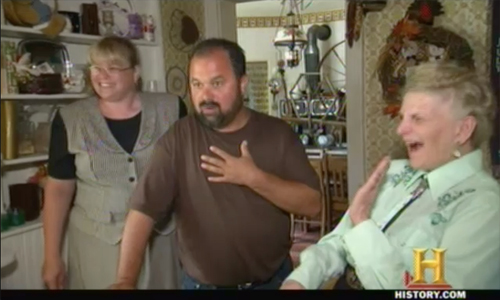 This whole time, Julia flirts rather openly with Frank, cracking jokes at his expense. She’s a self-professed “chubby chaser” and likes a cushy guy! Frank is just her type, but Frank is more interested in finding the exit. He’s a good sport, but I think that’s only because he’s hoping to buy a few items. He eventually gets an old candy jar for $55. 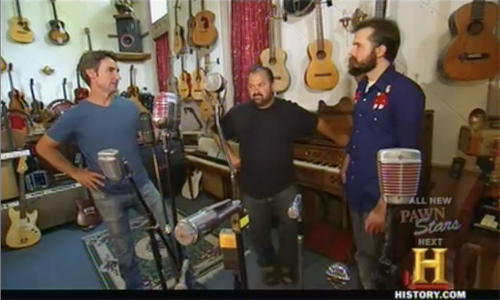 Mike and Frank visit Mike Brown to have the microphone appraised. Mike lives in an old church with his massive collection of vintage instruments. His place is like a museum. The pickers enjoy a mini tour, trying to learn about instruments and what to look for on future picks. Mike Brown tells the pickers that the microphone they bought is from the late 30’s and could be worth as much as $500 to the right person.

As the credits roll, Mike and Frank play some of the instruments – badly. Overall, this was an entertaining episode, but besides that GI Joe truck, in my opinion not many great treasures were found. What did you think? Did you see anything you would have bought for your collection?