Anyone who reads my blog knows that I’m a huge fan of the History Channel’s “American Pickers.” One thing that always aggravates me about the show is the lack of pop culture finds. Every now and then, Mike and Frank stumble across an antique toy or a vintage movie poster, but for the most part they tend to focus on “rusty gold” — that’s junk to you and me.

Well, this weekend, I had an incredible “pick” of my own. I saw a short post on Craigslist about an antique store that was liquidating its assets, selling everything by the box. I was curious and headed to the warehouse on Saturday morning, not expecting much, maybe a few boxes of leftover stuff they couldn’t sell. I also assumed the prices for a box would be fairly high. I was very, very wrong.

The sale was hidden away in a nondescript office park, with only a few hand made posters pointing the way. When I arrived, I was all alone with the seller and his family. Before me lay a huge warehouse filled with boxes of junk. Each box had a number written on it to denote the price, with most of them marked as $10 or less. I got busy.

There were dozens of boxes of dolls. I saw that some were labelled “Ad dolls” so I dug into those first. Here’s  a sample of what I found in those boxes.

See that guy in the upper left corner? He’s a Mr. Fleet mascot for Chrysler. I found two of these guys on eBay and their asking price (not sold price) is over $400. There’s a whole bunch of cereal premiums — Boo berry, Count Chocula, Frankenberry, Cap’n Crunch, the Trix Rabbit, Tony the Tiger, Snap, Crackle, and Pop, and who remembers the Wizard of O’s and the Fruit Brute? There are a few Bob’s Big Boy and Planters Peanut items, and several Pillsbury figures among all the others. I didn’t really know what was in the boxes until I got home and sorted through them, but needless to say, I was pretty happy.

Apparently, in the 70’s they liked advertising pillows. I bought a few more boxes of “ad dolls” which contained these guys: 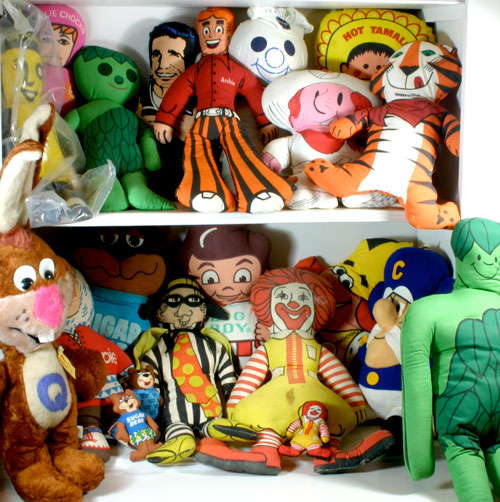 I picked up a couple of boxes that were filled with excellent vintage signs. Those embossed Blatz beer signs are so cool! 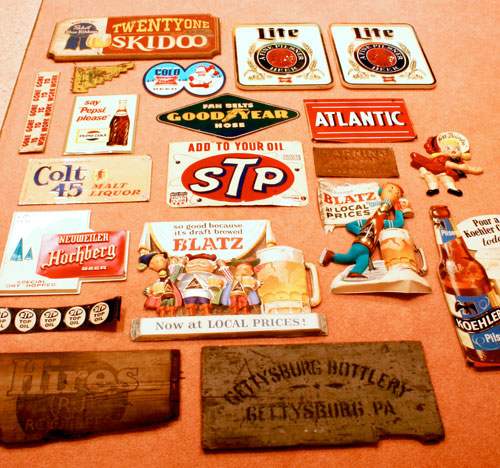 Just about any box that had toys in it also made its way home with me, with the highlights being a Marx windup tank, an Ertl A-Team van, a Ghostbusters Stay Puft marshmallow man, and a ton of old die cast cars. I also bought a box with hundreds of old military buttons dating back as far as the civil war. The buttons are all from a meticulously kept collection and I look forward to the challenge of learning about the history behind those.

I had to make two trips home after my first visit, since all the boxes would not fit in the car. Throughout the weekend, the sellers kept bringing out more and more boxes to replace the ones that were sold. There were over 900 boxes in all! I visited the sale four times over the weekend and left with a carload each time. I am very appreciative of the sellers who were incredibly helpful and generous, giving me “frequent buyer” discounts on top of the already great prices. The antique store was their mother’s business and they were simply overwhelmed with the sheer volume of stuff, and had priced it to sell. I was happy to to help them out to the best of my checkbook’s ability, and gave them my card for when they get to all the boxes still left up in the attic. I am thrilled to have gained entirely new collections and some great items to add to my existing ones.

The nature of the “picking” business is to turn around and flip all the items for a tidy profit, but a good number of these treasures are going to stay on my shelves for quite a while. I guess I’d make a pretty lousy picker after all.