Each episode of American Pickers gives us a little more insight into the complex lives of the hosts, Mike Wolfe and Frank Fritz. For example, right off the bat in this episode, we learn that Frank thinks Lady Ga Ga is “mega hot” and Gene Simmons is hotter than Kim Kardashian. Gene Simmons???

The first pick of this show is the 11-acre junkyard of Steve, AKA “Boo” and his fiancé, Deena. Mike refers to the place as an “Addams Family meets Sanford & Son” pick. Ha!

I liked Deena quite a bit. She was happy to get rid of any of Boo’s junk, and had a good sense of humor. The pickers find a Clinton chainsaw sign, an ugly lime green phone, a huge clock/thermometer sign, and some vintage Corvette parts. They also come across a NASCAR race car driven (and wrecked) by Ryan Newman. Remember, Ryan Newman was featured on an earlier episode this season, when the guys visited his palatial estate with a Phillips 66 sign. It is a small, small world. 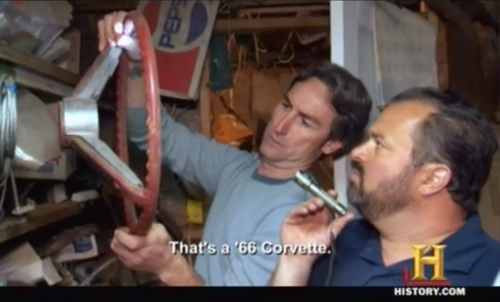 One thing that always amazes me about this show is that the people who have amassed these enormous stockpiles of “junk” always know exactly what they have. Boo knows his cars. He can look at a rusty old piece of an engine and tell you exactly what it is and what model and year of a car it was made for. Collectors really are experts in their area of interest, and this show repeatedly displays that fact.

A bit of insight is given about how Danielle finds all those great leads for Mike and Frank. One technique she uses is to call the local town halls and “find out who has ordinances against them because they have crap all over the yard.”

On the morning of the next pick, Mike is granted a genie in a bottle wish. He and Frank are allowed to pick through a motorcycle repair shop with boxes and boxes of New old stock (NOS) Harley Davidson parts from the 1930’s and 40’s. My thought: “Oh boy, more motorcycle parts.” 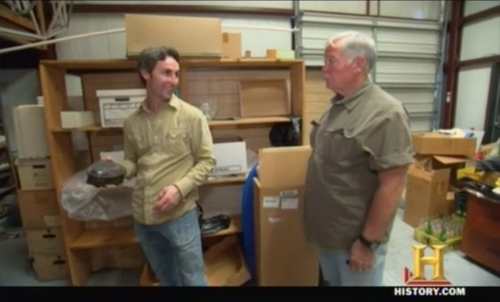 Billy is the owner of the shop and seems a little reluctant to part with some of the items. He doesn’t want the parts to be resold for a profit, but he’s fine with parting with them if Mike uses them on his own bike. So, of course Mike says they’re for his own bike, wink-wink. The guys leave with a small box of parts, but I think they could have spent a month looking through all those boxes if Billy had let them.

The last South Carolina pick is at the home of Michelle, who’s father died recently, leaving behind a house full of projectors from his days in the movie business. Michelle is overwhelmed by all the equipment and doesn’t know what to do with it. Mike is sympathetic for her and others in her situation.

When collectors die, they can leave a big burden on their heirs. I’ve actually thought about this myself and whenever I purchase something of value for my collections, I write it down in a little black book along with the price I paid. In case anything (God forbid) ever happens to me, my wife and kids will know not to just put those items out on the curb. 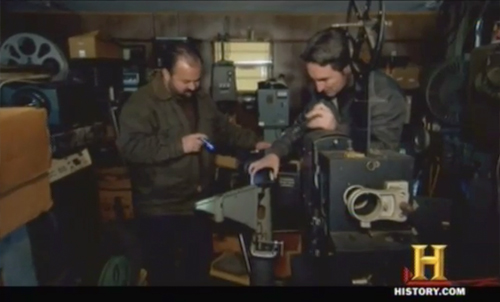 Mike and Frank admit that they don’t know enough about the movie equipment to make an offer, so they connect Michelle with one of their buddies in California who does know the stuff. Of course, Mike does buy the one projector that looks like it might be valuable — a Motiograph Deluxe from around 1914 for $200.

The pickers head  home, to their shop in Le Claire and find a note from one of their past buyers, saying he wants to sell back some of his items. Steve buys signs and decorative items to be used in theme restaurants (think Fuddruckers), and has an enormous barn filled with amazing stuff. I could spend days poking around in that dusty old barn.

Earlier in the show, Mike was in his “picking Heaven,” well now we move on to Frank’s. To quote the Grateful Dead, “Signs, signs, everywhere there’s signs.” Frank is buying signs left and right for brands like John Deere, Quaker State, and Sealtest Ice Cream, while Mike is receiving prices that are way too high for his budget. He needs a little bit of wiggle room to make a profit, and Steve is not giving him any. Mike does finally gets Steve to crack a little and buys an antique phone booth for $475. 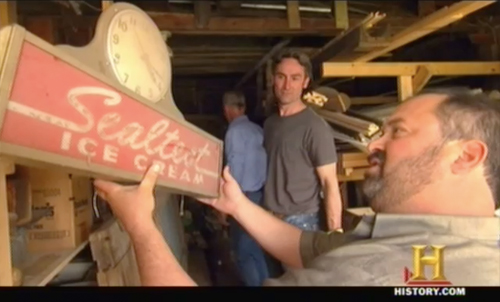 All told, the guys purchased 40 signs and a phone booth. I have never been able to figure out how these guys make a profit spending all afternoon picking for a few small items where they may make a $100 or so in profit. This is the kind of pick that can make some money. It’s the Costco way — buy in bulk.

I am a little worried for the guys though, because it doesn’t look like they’re selling very much these days. If you look around the shop, the walls and shelves are filled with items they picked on previous episodes. Maybe we need a show dedicated to Danielle and how she sells the items. Hello Danielle. 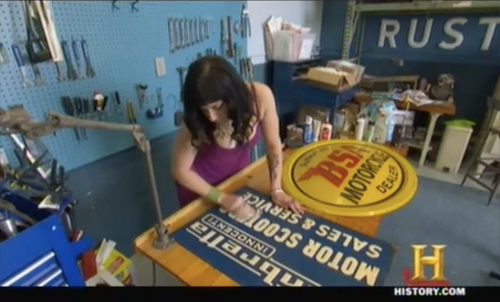 Once they’re back at the shop, Mike and Frank meet with Kenny, a coin-op expert, and learn that the phone booth is worth $850 which would give them a profit of $375. The show ends with Danielle using the booth as her “office” which she doesn’t care for very much. 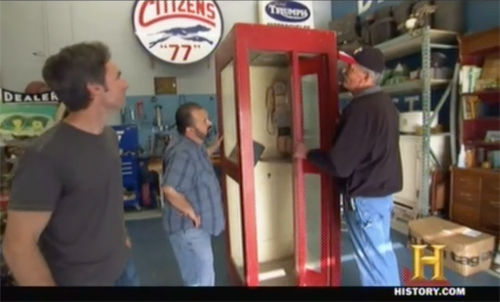 I’m really enjoying this season so far. The producers have figured out how to make the pickers “good guys” which was a big problem for them in the first season. The uncomfortable moments are few and far between now, and everyone seems to be having fun which makes for more enjoyable hour of TV. What do you think? Are you digging the show this season?