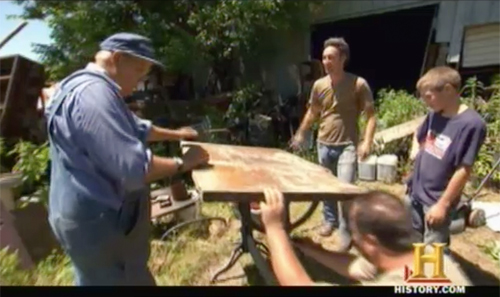 Mike and Frank started this episode in Iowa, picking at Danny Bean’s place. Danny was on a previous episode and was just a little bit less releuctant to part with items this time. Mike’s nephew, Rhesa, wants to be a picker, so they take him along, much to Danielle’s chagrin, since she has wanted to go on a pick for ages.

Danny Bean goes to 2-3 auctions a week and has accumulated several buildings full of “rusty gold.” He shows Mike a large pot metal owl from an old White Owl Cigar sign. He recently bought it and doesn’t really want to sell it, he just wants to show it to Mike. He says he would take $3000 for it, but mike can’t make a profit on that, so it says with Danny.

During this pick, Mike gives Rhesa some pointers, one of which is to “make sure you always have a way out.” That would be embarrassing wouldn’t it? You start digging through an old barn and then get stuck! I wonder if that’s ever happened to Mike or Frank. Another tip Mike offers is to “always watch where you’re walking,” which becomes funny at a later moment in the show for Frank.

Mike buys two vintage Harley Davidson hats, reminiscent of the one Marlon Brando wore in The Wild One. Danny had three of these hats, but would only sell two to Mike for $60 apiece.

Frank finds some neat things, but the prices are a bit steep. He wants a Harley Davidson Pre-Lux oil can but Danny is asking $100 for it, and he also wants a Remington Chain Saws sign which Danny would sell for $100. Frank sees a large mounted Tarpon fish, and says he’ll give Danny $200 for all three items, and seals the deal. That’s “Bundling 101” per Frank.

Mike is digging up high in a barn and unburies an 1890’s drafting table which Danny reluctantly sells for $250.

Rhesa does some picking and haggling of his own, and negotiates some cow horns for $5.00 and a child’s horse for $20. Afterwards he states, “picking isn’t as hard as Mike and Frank think it is. They’re just old.” I wonder if we’ll see any other family members on future episodes.

The guys drop Rhesa off at home and head to Wisconsin, to visit Tim, who is looking to part with some items to make room for his grandkids. Tim has 10,000 square feet of stuff. It looks like there are plenty of great items, but Tim isn’t as motivated to sell as Mike and Frank had hoped. 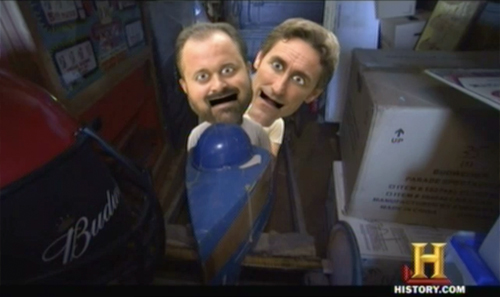 The guys find a neat old cigarette machine from the empire state building but tim isn’t ready to part with it. Mike then finds a vintage soap box derby car and has all kinds of fantasies about taking it for a spin with Frankie, but the price isn’t right on this either.

Mike’s nose leads him to a 1952 Vespa scooter in less than perfect condition. Tim wants $1,700 for it, and Mike offers him $700. Needless to say, this is another deal that is not made.

Frank decides it is time to play hardball and shows Tim a framed picture of his grandkids, the reason the pickers are there. Tim finally sees the light and realizes that it might be time to start selling. 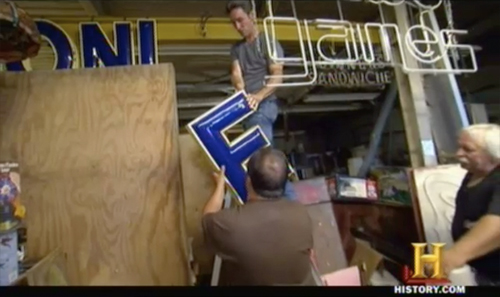 Mike buys six of large porcelain sign letters for $200, and then manages to get a Vespa scooter his original $700 offer. Frank sees a windup record player which Tim doesn’t think is worth any more than $100, and Frank pops for it. The guys finally break through the ice and are able to come away with a few nice items, but it takes some effort.

The next stop is an 1800’s home of a famous opera singer. An energetic young couple bought the house — contents and all — and are hoping that the pickers will find treasure in all the junk. They start picking in the barn, where Frank steps on a rotted board and nearly falls through the floor. Always watch where you step, Frank!

The barn is filled with junk, not treasure. The couple is disappointed that Mike and Frank can’t find much worth buying. Mike does find an old floor lamp for $15, and an old mouse trap for $20. He also finds a folk art lighthouse/weathervane which he eventually buys for $35, after some “tough” negotiating. 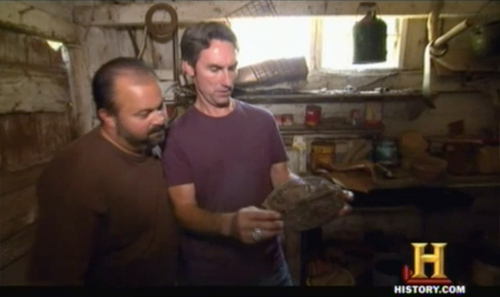 The pickers sift through the contents of the house and find some memorabilia from Marie Rappold’s opera days, but those items rightfully stay with the house. They find a really neat looking map of the United States but it is in pretty rough shape, so they pass on it. I would have snatched that up instantly.

Mike buys a batch of old souvenir pennants for $25. I love those old pennants and actually have a bunch myself, but am always surprised at how much they aren’t worth.

Frank buys an old photographer’s copy machine for $40 along with a couple of photographic plates. This thing looks pretty rustic and I wonder if it’s even worth $40. 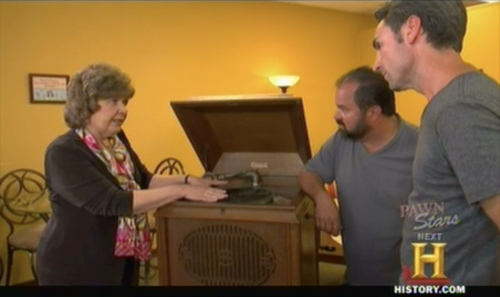 Mike and Frank take the vintage record player to Shirley, an appraiser and expert in victrolas and early record players. She tells them that they bought a Brunswick record player that sold originally for $150, and is now worth $250, so Frank doubled his money and then some. 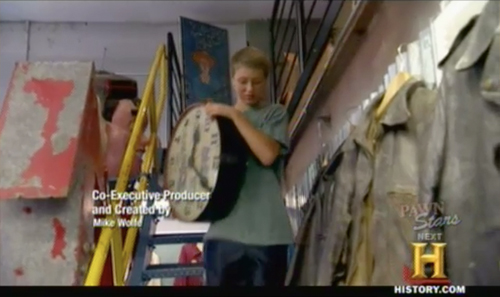 The show ends with Danielle putting young Rhesa to work in the shop, dusting, sweeping, and moving heavy objects — a bit of revenge for his getting to go on a pick while she had to stay at the shop again.

Overall, I found this episode a little ho-hum. Nothing outstanding was found, and there weren’t any eccentric characters. I did like the vibrancy that the young couple brought to the show, and I’d like to see more of that in future episodes. I also think Tim probably had loads of great stuff buried in his piles, but the show didn’t focus on anything too exciting. What did you think? Did you see anything that I missed, or anything that you would have picked?