This week’s episode of American Pickers had the guys picking in Illinois, and they started at the home of Lester, lovingly referred to by the neighborhood kids as the “spooky collector.” I can’t imagine how he got that nickname. Maybe it was the decaying taxidermy monkey in the Hawaiian shirt. Or maybe it was the taxidermy rear end of a white tail deer hanging on the wall. Or maybe it was the miniature horse stuffed with no ears and a Frankenstein stitch running across its throat. Kids! They come up with kooky nicknames for everyone!

Lester is the “spooky collector” and is having trouble getting around these days as he gets older. He has charged his daughter, Vicky, with clearing out some of his clutter.  Everything’s for sale, but Lester knows what his treasures are worth. Mike likes a chair made out of steer horns, but doesn’t like it for $2,000. But, he does spring for an ugly old fur backpack for  $65.

Lester asks for $1,000 for a taxidermy miniature horse which Mike really likes, but he’s unsure about taxidermy in general, until he has some more information. Mike and Frank go outside with Vicky and find an antique Genron tandem pedal car, a small metal dresser, a giant red arrow from a motel that once stood on Route 66, a neat old Buddy L toy truck, and a few other things. All of these items made it into their van since Vicky was in charge of pricing them, and she was more than happy to get rid of her dad’s stuff.

While picking through one of the out buildings, Mike had a great line, saying “If raccoon turds were worth anything, we’d be millionaires, Franky!”

Mike seems to want some of the taxidermy animals but Frank isn’t interested. they come across a stuffed monkey named Skippy. Its face was decayed and it was creepy as hell. When this thing was new, it would have been fantastic! Imagine having a chimp sitting in your house with a bright flowered Hawaiian shirt. What could be more awesome than that? 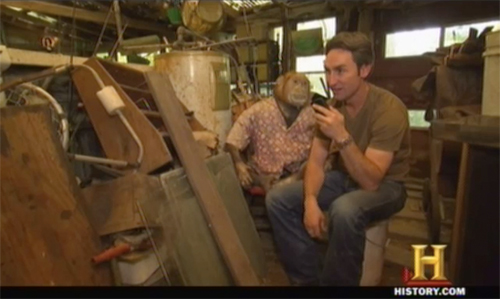 Mike and Frank take the miniature horse to an appraiser to see what it’s worth. They learn that the horse is over 100 years old and was probably used to display children’s saddles in a saddlery. It’s worth $1,200, even without any ears. 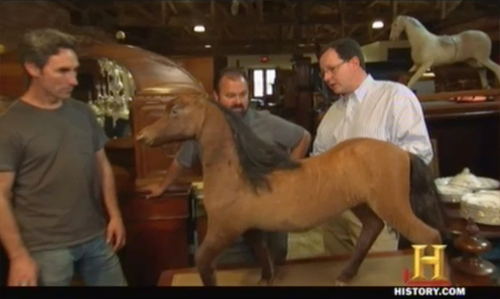 Next, the pickers visit Keith, who is a collector with over four floors of stuff. Keith is apparently getting ready to move, so the pickers think they will be able to get some good bargains. Wrong.

Keith has some interesting items, including a dancing hot dog marionette arcade machine. He wants $400 for it, but Mike isn’t that interested. 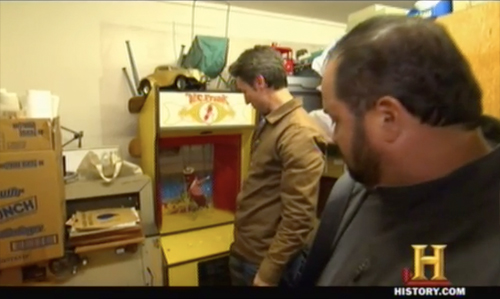 He also shows the guys a superb Maytag salesman sampler washing machine, which is a small replica with high detail, but Mike and Frank can’t get a deal.

There was also an Evil Kneivel play set and a couple of figures. Keith wants $40, which is too much for what it is, and for its condition. I was just happy to see some pop culture! It turns out that Keith is a collector who is not ready to sell anything yet, so no deals today. 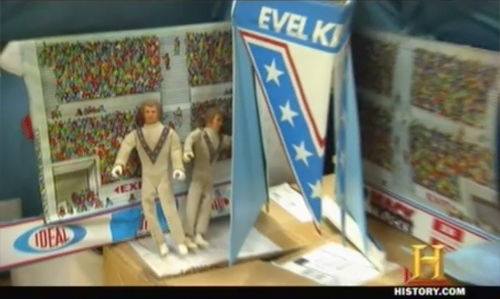 Mike and Frank decide to pay a visit to their “Picking Mama,” Judy, who appeared on a previous show. Judy has a multi-story warehouse full of stuff, from the days when she used to run an antique business with her husband, Morrie. Morrie has recenlty passed on, and Judy is genuinely happy to see Mike and Frank again, and treats them like her own kids. 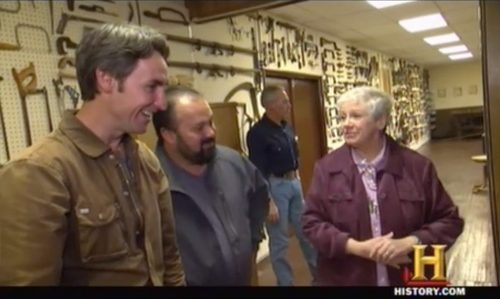 Mike and Frank buy some industrial items, an old rolling cart for$150, a cast iron table saw for $200, and a locker for $10. Frank buys a nice old leather chair for $30, and Mike finds a large leather trunk, with cast iron parts for $50. After the picking is done, Judy sits the guys down and serves them cookies and coffee while having their van loaded.

Mike and Frank return to the shop and present Danielle with a gift from Judy —  a dart board with their picture on it. Danielle puts it to good use. 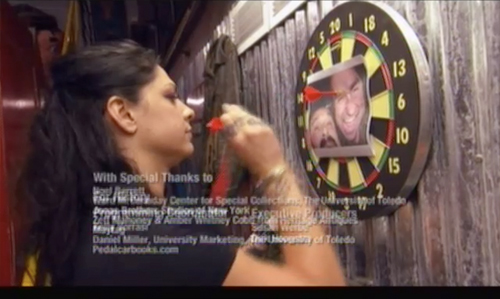 This was one of the better episodes, in my opinion. It made me laugh out loud a couple of times, which is not something I usually do while watching the show. It was another motor-free episode, which appeals to me and my collecting pursuits, and you can’t go wrong with monkeys. So, more monkeys, please. Anyone else like what they saw?