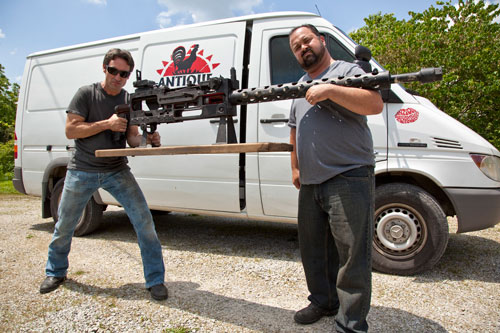 It’s no secret that I’m a big fan of Mike Wolfe, Frank Fritz, and especially Danielle Colby Cushman, the crew of the History Channel’s American Pickers. Well, the long wait is over and we get some new episodes starting tonight at 9:00pm, so set the DVR now!

This show gets better with age. The people that Mike and Frank meet, and the items they “pick,” are becoming more and more interesting. If you haven’t seen it yet, give it a shot, and I think you’ll like what you find.

Mike Wolfe and Frank Fritz are once again searching the back roads, junkyards, and filled-to-the-brim barns in America for “rusty gold.” AMERICAN PICKERS, the #1 new cable series of 2010, returns for new episodes of its second season beginning Monday, December 6 at 9pm ET on HISTORY.

Part sleuths, part antiques experts, and part cultural historians – Mike and Frank’s adventures bring them to small towns across the country in search of weird and wonderful Americana. Each treasure hunt leads them to fascinating, quirky characters – everyday people with stories that open a window onto American life.

As professional “pickers,” these childhood buddies comb through memorabilia and artifacts, hoping to find treasures among the trash. Sometimes they make a few bucks; and sometimes they walk away with little more than the history of an item.

Meanwhile, back in Iowa, Danielle Colby holds down the fort at Antique Archaeology.  She spends her time getting leads, talking to sellers and doing research via trade publications and websites. Danielle also keeps the boys in line – while they keep her in stitches with their antics.

“We’re caretakers of treasures and the stories behind them,” says Mike. Traveling along with the duo, viewers will meet an assortment of American originals and watch as a patchwork of history unfolds – one treasure at a time.

HISTORY® and HISTORY HD® are the leading destinations for revealing, award-winning original non-fiction series and event-driven specials that connect history with viewers in an informative, immersive and entertaining manner across multiple platforms. Programming covers a diverse variety of historical genres ranging from military history to contemporary history, technology to natural history, as well as science, archaeology and pop culture. Among the network’s program offerings are hit series such as American Pickers, Ax Men, The Universe, Ice Road Truckers, Chasing Mummies, Top Shot and Pawn Stars, as well as acclaimed specials including America the Story of Us, WWII in HD, 102 Minutes That Changed America, Moonshot and Life After People. HISTORY has earned four Peabody Awards, eight Primetime Emmy® Awards, 12 News & Documentary Emmy® Awards and received the prestigious Governor’s Award from the Academy of Television Arts & Sciences for the network’s Save Our History® campaign dedicated to historic preservation and history education. Take a Veteran to School Day is the network’s latest initiative connecting America’s schools and communities with veterans from all wars. The HISTORY website, located at www.history.com, is the leading online resource for all things history, featuring over 20,000 videos, images, audio clips, articles and interactive features that allow visitors to dig deeper into a broad range of thousands of historical topics.