Mike and Frank start this episode in Michigan, where they visit Jan Burton, a widow who has been left with buildings full of her husband’s belongings. Jan has some pretty great stuff, and was more than willing to let it go at a low price. Mike bought a large Brille clock for $60. Frank found a midget race car in its original box, only to learn that it was just sold on eBay. Frank was also told that the 1965 Honda motorcycle they were expecting to see was sold last week — for $90.00! Frank is knocked for a loop, leading Mike to state that he “looks like a Friday night at a bar, always striking out.” While Frank sulks, Mike buys some old board games and puzzles, and a plastic toy robot — some great pop culture finds! 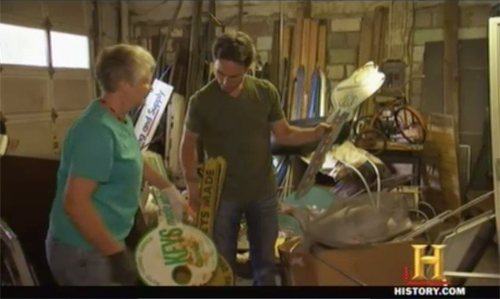 They walk to another building, which used to be the locksmith business of Jan’s husband. Mike finds some great key shaped signs and buys three of them for $75. Frank finally shakes out of his funk and buys some vintage cone top soda cans for $2 each, and a toy hover car in its original box for $10 — an absolute steal. This is the part where I started to lose it. The guys found a huge stash of vintage Mad magazines and old comic books, and bought the lot of them for $10! One of those comics was surely worth many times that amount. I have dreams of finding buys like this — great vintage stuff with an uninformed/uninterested seller who just wants it gone.

Frank buys a small Pearl printing press for $200 and they have a heck of a time getting the heavy piece of machinery out of the basement and into the truck. This is a pretty cool looking press, that is small enough to actually have in your home without needing to dedicate an entire room to it. I wouldn’t mind having one of those to play around with every now and then.

Frank thinks the van is having problems, but Mike refuses to believe him. We all know where this is headed.

The van manages to make it to Wisconsin, where Mike and Frank stop at a good looking pick. This place is owned by Larry, a retired trucker, who has actually built an entire town on his 37 acre property. He would see buildings in his travels that were slated to be demolished, and would buy them and move them to his property. He had a jail, a saloon, a fire department — you name it! 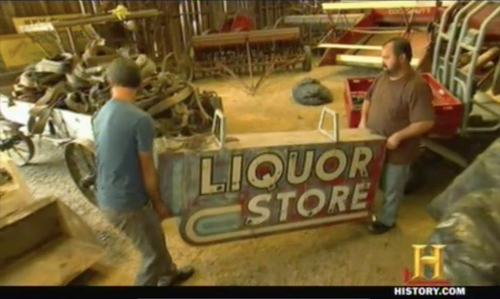 Frank buys a really nice leaded glass window for $50 and a large D-X Oil sign for another $50. Mike finds a huge liquor store sign that was neon at one time. He gets it for $225.

After leaving Larry’s town, the guys drive through another nice small Wisconsin town where they see a giant Jaws head sticking out of the side of an old gas station. This is as good of an invitation as any, so they stop and meet the shop’s owner, Ted.

Ted is a really cool guy with some incredibly cool stuff. I think it’s safe to say that Ted is a bachelor, because his house is entirely built around his collections — it’s awesome! He invites Mike and Frank to look through all his stuff, since he is in the business to sell it. Mike finds some creepy alien props from the TV series, Roswell. He buys two of them for $100. I would think a prop like this would be an easy sell on eBay. I’d buy it! 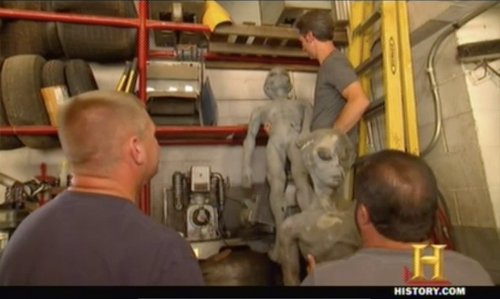 Frank buys a huge animated Swiss Army knife display, a large Western Auto sign, and a stamps sign for a combined total of $575. 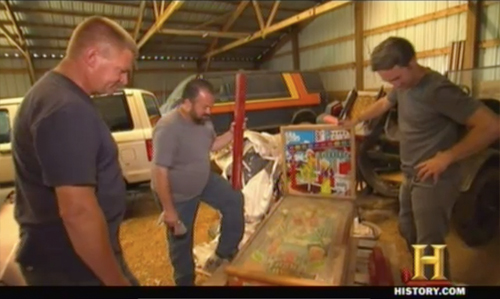 Mike sees an awesome vintage Spitfire pinball machine with some incredible graphics. He wants to buy it for $250 but Ted wants $275, so they decide to arm wrestle for it. Let’s just say that Ted is a big guy. He toys with Mike for a bit and then shuts him down easily. Final price: $275. 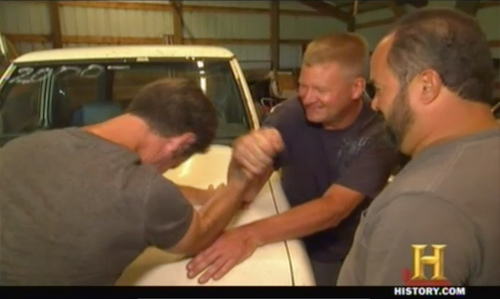 Mike risks life and limb to get a porcelain Goodyear sign down from a high ledge and then the guys head back to the Iowa. 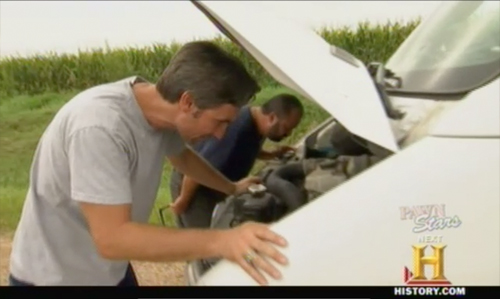 The van breaks down in the middle of a corn field, and Frank does his best to contain the “I told you so’s.” They have to call Mike’s brother, Rob, to come tow them back to the shop. 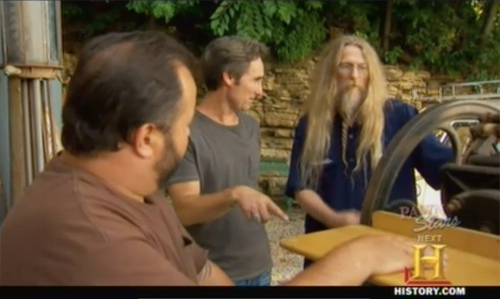 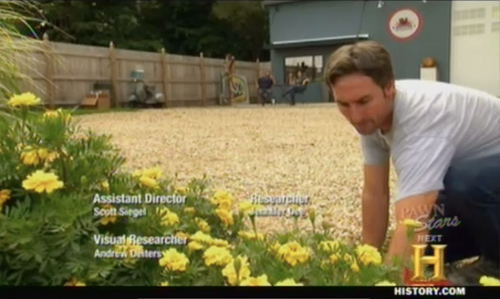 This episode ends with Mike weeding the grounds of the shop while Frank and Danielle watch. Mike is doing his penance for not servicing the van.

I thought this was a great episode. The guys found some stuff that really appealed to my collecting interests and I kept finding myself wishing I was in their shoes. There is nothing like finding great stuff at a great price, where the seller leaves the table happy as well. What do you think? Anyone see anything you would have picked?