This week’s recap is a little late since on Monday night I was at the Virginia Tech vs. Boise State game, watching my beloved Hokies lose a heartbreaker. To be honest, now that Monday Night Football is on, these recaps may be delayed on a regular basis.

When I saw the title of this week’s episode of American Pickers, I actually thought it was repeat since Laurel and Hardy showed up on an earlier episode this season. Luckily, my faithful DVR saved me, and I get to subject you to another review…

This episode had Mike and Frank picking their way through Kentucky. Both the weather and the picking was hot, and Frank had the pit stains to prove it! Danielle asks for a raise, and the guys predictably laugh in their high-pitched squeals and cut her off, even though we all know that she will get what she wants.

The guys visit Mike, a collector who has recently endured a car accident and has realized that the material items he owns don’t mean as much to him as they once did, and he’s looking to unload some of them. He has plenty of great signs, advertising items, pinball machines, and other unique items he has picked up at auctions over the years. 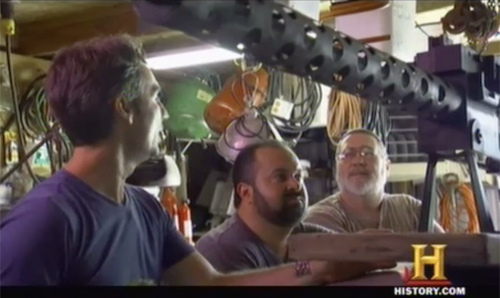 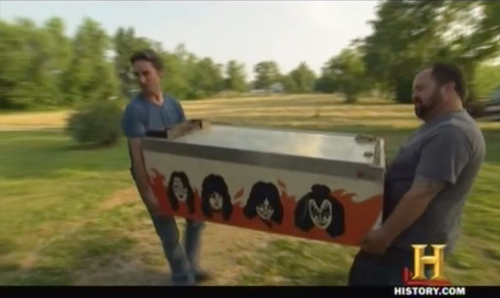 Frank finds a vintage KISS pinball machine, which doesn’t work but would make a great coffee table for $200. I’ve always heard that you never want to buy a fixer-upper pinball machine since they are so complex, it is extremely dificult to repair them unless you do it for a living, and finding spare parts is probably a nightmare.

Mike has been using an old school bus for storage and has it crammed full of stuff. Frank sees an old cigarette machine he wants, but he can’t get it off the bus, so no deal there, but he does buy some glass oil containers and a carrier for $25.

They head to one of the outbuildings and find a super large Sinclair oil sign that is in excellent shape and buy it for $300, before heading into the main house where all the “really good stuff” is. Mike’s house is neatly arranged and filled with great items. It reminded me of a museum or high brow antique store. unlike just about every other house the pickers have ever been inside, this one was neat and not filled to the rafters with boxes just waiting to fall on your head. Mike is my kind of collector. He knows what he has and he knows how to enjoy it, but he also realizes that other people might enjoy it more and is willing to let some of it go. 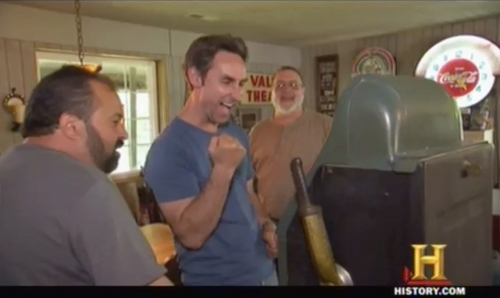 Picker Mike buys a 1947 Mills Hightop slot machine for $1500, and Frank buys a 1920’s electric strength tester made by Advance in Chicago, Illinois for $400. This thing actually shocks you until you can’t stand the pain any longer. Man, the days before the CPSC sure were fun!

“The time to buy something unusual is when you see it.” – Frank

The next pick is at the geodisic dome house owned by Tracy and her husband, who go to auctions or yard sales every day and have a packed garage to prove it. Mike and Frank have one hour to find what they want since they were late getting there, so the “speed pick” begins.

There’s not much interesting stuff, mainly the kind of junk you would find at yard sales, until Mike sees an NRA Bausch & Lomb spotting scope in its original box, which he buys for $70. He and Frank also buy a vintage rope twister and a steam powered popcorn machine for $300 total.

An interesting tidbit that Mike mentioned was how the internet has made some hard-to-find items incredibly common. They were looking at some old bike parts, which were scarce a few years ago, but now that we have the internet, you can find them pretty easily. As a book collector, I remember watching some previously “rare” books show up every other day on eBay, and their value quickly dropped. 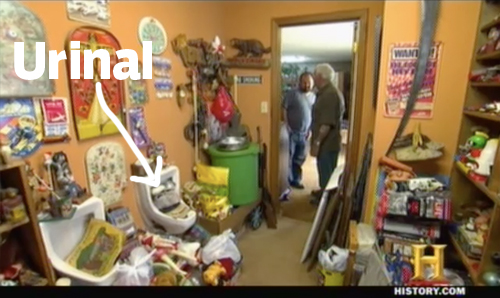 The last pick of this show is at the house of Don and Nannette who live in an old Honky Tonk dance hall, where the old urinal is now filled with vintage toys. i was excited at “toys” but no so much when the “urinal” bit was mentioned.

“Toys always command a good price and people love to collect them.” -Frank 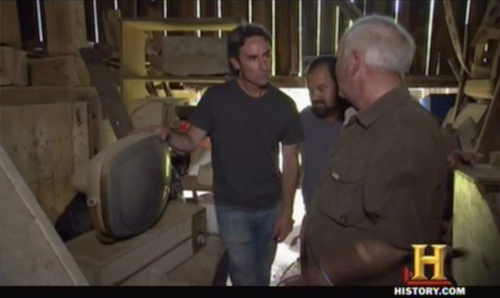 Don has vintage toys lining the walls, but most of them are missing parts and in poor shape. Plus, Don wants to get full retail prices for them, so Mike and Frank can’t make any deals. They move out to the barn and Mike finds a dusty Philco Television from the 50’s. It is very cool and retro, and even though it doesn’t work, it is good for parts, so he buys it for $100.

Frank finds some old metal screen door pushes with neat advertising on them, but he can’t get a good price, so he passes on them. I realized that I have owned screen door pushes, but didn’t know what they were. Now I know. Now I know I sold them for too little. This is why I love watching American Pickers and Pawn Stars — I learn something new in every show. 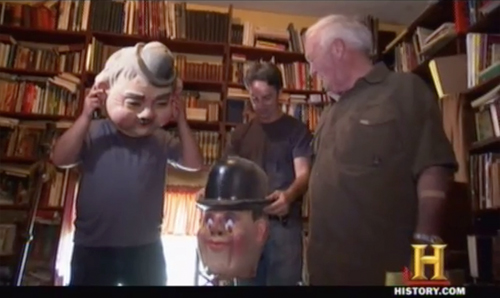 Mike looks behind a curtain and finds a set of Laurel and Hardy masks. They can not leave without those masks, since Laurel and Hardy are Mike and Frank’s alter egos. Don reluctantly parts with both masks for $60, but he is “tickled” that part of his collection is going to be enjoyed by someone else.

Back to the shop, and the guys call in their appraiser, George, to tell them about the popcorn maker. They learn it was made by Charles Cretor’s & Co. in Chicago around 1906-1920, and it is pretty rare to find with all its piece intact. It is worth an estimated $2,000, which is a pretty good profit on the $250 they paid for it. 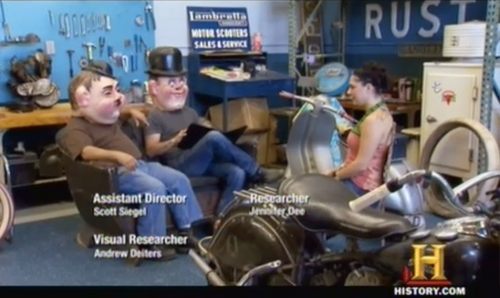 The closing credits roll while Danielle is given a performance review by Laurel & Hardy. Pay the lady.

This was a fun, motorcycle-free episode, with some pop culture finds and more happy sellers. Keep it up History Channel! Anybody else see anything they liked?