For me, this was the best episode of American Pickers yet. Amazing pop-culture items pop up for the full 60 minutes.

Mike and Frank are freestyling through the foggy Tennessee countryside. They stop at a house right alongside the road that is covered in vintage signs and homemade signs — most of which say “Keep Out” and “No Trespassing.” Despite the signs, the Pickers take their chances and knock on the door.

Junior opens the door and greets the Pickers in his overalls and big white beard. Junior is happy to let the guys look around his place to see if they can find any treasure.

It doesn’t take Mike long to find a large red Fire Chief gas pump for $801, since Junior already has an offer for $800. Mike continues to dig through piles of items and unearths a great Dukes of Hazzard TV tray 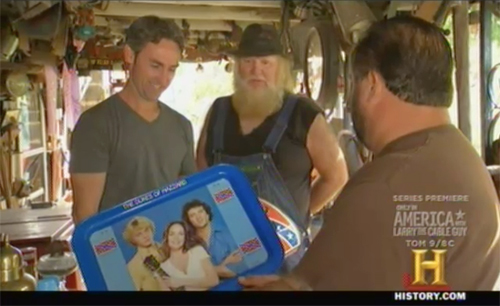 Mike finds a large Mercury outboard motor sign and buys it for $50. He then references my favorite line from one of my favorite movies, Tombstone, and says “I’m your huckleberry.” That earned a fist pump in the air from this reviewer.

The funniest scene in this episode had Frank trying out a vintage motorized Exercycle. Mike flips the switch to high speed, and Frank’s feet fly off the pedals. Iit looks like he’s riding a rodeo bull, much to Mike’s delight. 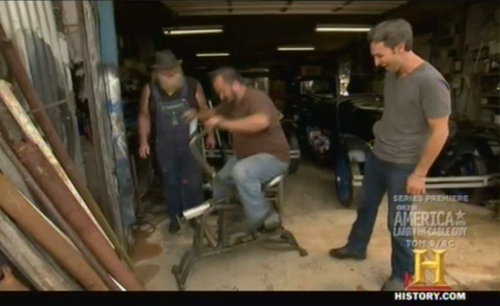 Frank likes a Pet Ice Cream sign that’s hanging on a fence, and buys it for $100. Once he pries it off the fence, he is happy to find that it is two-sided, which makes it more valuable.

that has a bullet piercing it. He buys it for $50, which seems like a huge steal to me. I live in Civil War central here in Virginia, and most relics that I’ve seen are barely recognizable for what they are. This one looks almost new. The show reveals that the buckle was sold for $200 — not a bad profit. 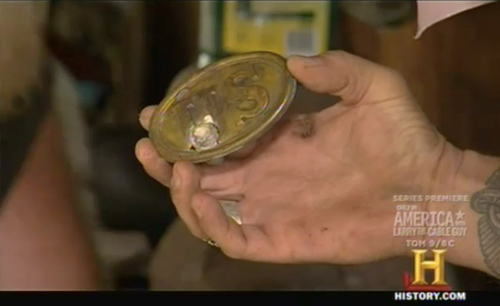 The Pickers leave Junior’s place and are presented with one of Junior’s custom painted “Keep Out” signs as memento. 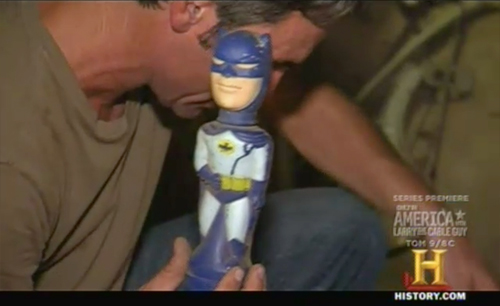 Danielle calls with a new lead. Randy is a lifetime collector who has just decided to start selling some of his stuff. Randy has four barns to pick through, but unfortunately for Mike and Frank, Randy is REALLY reluctant to sell anything.

, including one of the Beatles, and Batman and Robin. He offers $15 each — a fair price for most of them, but that Beatles one probably would fetch a few bucks.  Mike is frustrated that Randy won’t sell him the Soakies or anything else. 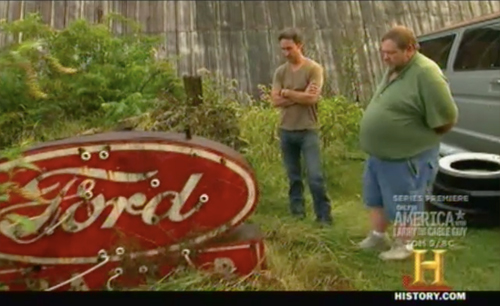 On their way to another barn, Mike finds a huge porcelain Ford dealer sign, buried in the weeds. Randy shows him another Ford sign he has stashed in an outbuilding, and Mike finally breaks the ice, and buys both signs for $4,500. The choir breaks out with a bit of Hallelujiah.

Mike and Frank hit the road again and visit Joe, who collects trains — real trains! Joe also has motorcycles, cars, and all sorts of other rusty gold for the guys to sift through.

Mike finds a box of vintage toys that has a Planet of the Apes thermos, and some small plastic cars and figures. I’m not sure, but I think these little Frankenstein and Creature from the Black Lagoon figures are worth a pretty penny. Mike buys the whole box for $15 and I felt really bad for Joe at this point. 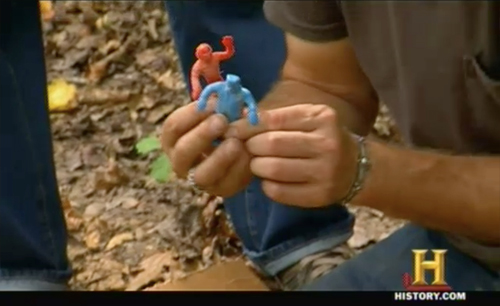 a with a missing hand and tosses it back on the pile. I have one of these and it’s one of my favorite vintage toys, and I hated to see this one tossed back. 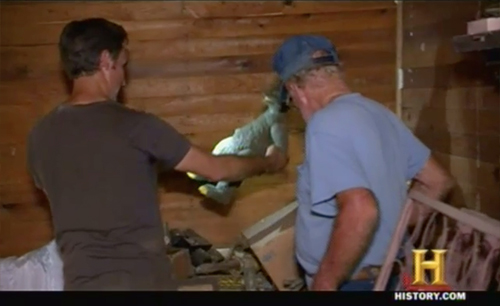 The pop culture excellence came to ahead with this awesome piece: 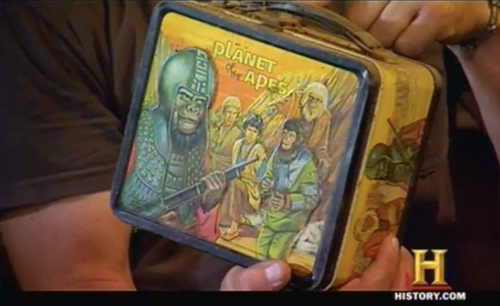 for years. It’s not so much that it’s rare, but I’m cheap. Mike buys this one for $32.50, and I immediately sent him a tweet offering him double for all the toys — cash money. I’m still waiting on a reply. 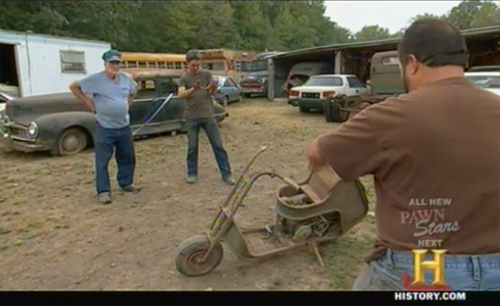 Frank spots an old 750 Honda chopper but it doesn’t have the title and Joe wants $5,500 for it which is way too high. He then finds a pre-WWII Moto-Scoot scooter. Joe wants $1,500 and Frank offers $850. Joe has been negotiating all his life and drives a hard bargain, but they eventually agree to $1,000. 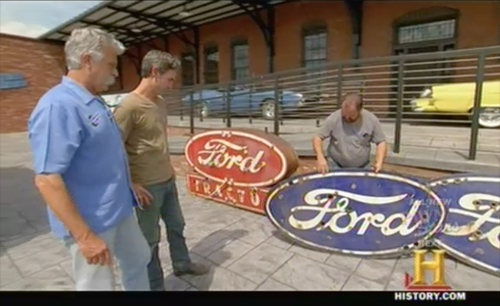 The Pickers visit their friend, Corky to see if he’ll buy the Ford signs and save them from having to carry them all the way back to Iowa. Corky buys both for $6,500 — an easy $2,000 profit for Mike and Frank.

I loved, loved, loved this episode. The Pickers have found some pop culture items here and there, but this episode was excellent. It made me want to quit my day job and knock on some doors — “Keep Out” signs be damned! What did you think?