The economy is apparently taking its toll on Antique Archaeology. Danielle calls and informs the guys that things are slow at the shop, and there’s not much money coming in the door, but plenty is going out. Mike and Frank need to find a big ticket item fast.

They do some freestyle picking in Illinois and stop at a house where they meet Tony and his little dog, Lady. Tony goes to two auctions a week and his expansive property is proof of that. He ran out of room for all his stuff, so he bought his neighbor’s house and filled it with stuff too. Tony says that everything is for sale except for his wife and his dog.

The pop culture find of this episode is a really cool vintage Marx Dick Tracy car which Frank buys for $15, an absolute steal! 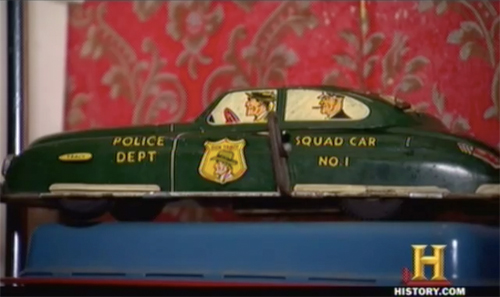 Mike finds a box of WWI posters and calls Judy, their picking mama from last week’s show, for advice, since she is a hard core collector of that genre. After she tells them what to look for, they determine that the posters are reproductions because the paper is thick and not like newsprint.

Frank buys a large set of Elk horns and a vintage movie projector for $125. There was plenty of great stuff in Tony’s possessions, and I could have burrowed through the piles for days. 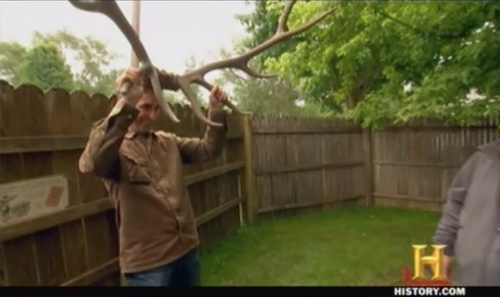 Mike and Frank hit the road and give us a rundown of what they look for when they do freestyle picking:

The guys are driving through a small town and see a neon Buick sign and a Chevrolet sign hanging on the side of an old brick building. Ken is the owner of the building and is moving to Florida, so he’s ready to sell some items. Mike and Frank find quite a few neat items, including an old jug for $30, a tin urn with colorful lithography for $10, a vintage risqué photo of some ladies (very tame for this day and age) for $25, a couple of chrome and leather chairs for $40, and a Schwinn bicycle for $175. After two straight bike-less episodes, the streak has been broken. 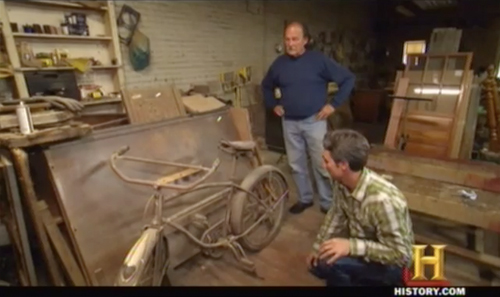 Danielle calls to tell the pickers about their next pick, Hobo Jack, a real life hobo who has acres in the woods filled with cars, bikes, motorcycles, and other things. The guys can’t even get the van down the driveway, because it’s too muddy and narrow. Jack is an eccentric old fellow, with a hawk feather tucked in his hatband, and a grey beard that runs half way down his chest. He greets them by playing his harmonica and guitar. 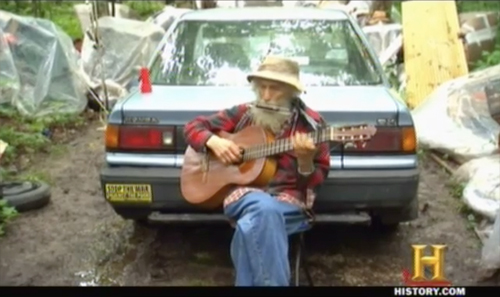 Hobo Jack is this season’s Mole Man Ron. Jack has piles and piles of stuff stashed in buildings and under tarps spread across acres of wooded forest. I wonder if anyone knows he’s even there. There doesn’t appear to be a house, but there is plenty of “rusty gold” for the pickers to pick through. 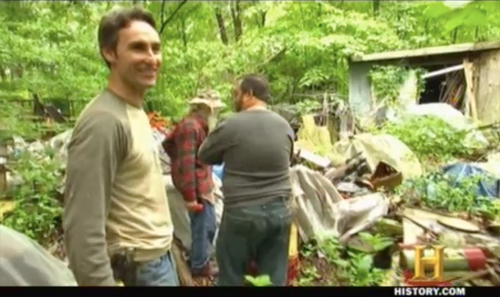 Frank finds a 1921 V12 indian motorcycle engine and Hobo Jack sells it to him for $900. he tells Frank that the transmission is somewhere in the building, so the pickers start the search. They find the elusive transmission after an hour of hunting, and buy it for $150.

In another building, Mike finds a pre-1920 Excelsior motorcycle, but Hobo Jack won’t sell it for $3,000. Jack shows Mike a motor with no markings that he thinks could be a motorcycle or a cycle car motor. Mike offers $3,000 for the motor and ups his price for the Excelsior to $5,000. After some tough negotiating, Hobo jack agrees to part with both for $9,000. Hobo Jack has been picking for 60 years and showed Mike how to drive a hard bargain. 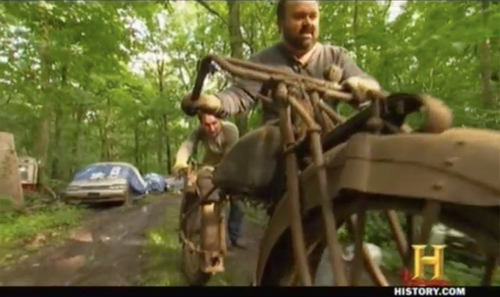 At this point in the show, my wife was incredulous that those rusty hunks of junk were worth $9,000 and I have to side with her. I want to see one of these bikes or engines restored to the point that they are shiny and functional, and then I want to see the person who buys them to use on their own bike.

Mike and Frank visit a motorcycle guru for an appraisal. The Excelsior motorcycle, in its rough condition, is worth around $8,000, mainly because it still retains the original chassis. The V-shaped motor ends up being a “home run,” which turns out to be a rare Curtiss motor circa 1906. The motor is worth $7,000.

Okay, so there were bikes and motors in this episode, but there was also a pop culture find and a really unique character in Hobo Jack, so overall it was a pretty good show. What did you think? Did you see anything you would have “picked?”