Last night’s episode was my favorite show of the season so far, all because of a guy named Morris. We’ll get to him in a minute…

This week’s inside scoop on the personal lives of our intrepid pickers has us learn that they are fans of Saved by the Bell, 90210, The OC, and The Hills. I’m really beginning to question these two.

Mike and Frank hit the road and head to the vast picking wasteland known as Kansas. Danielle has trouble finding any good leads, but learns about a couple of other pickers who have a huge warehouse full of stuff. As the guys pull up to the spot, Frank eloquently states, “Wow, look at all that sh*t.” 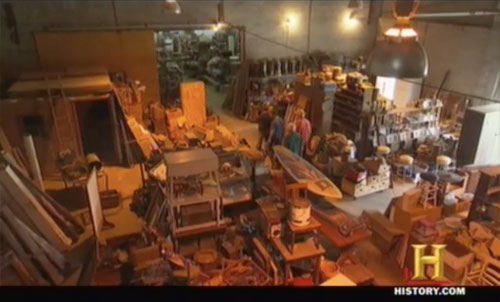 Frank was pretty accurate in his assessment. Augie and Dennis are a couple of fellow pickers who make their living selling at flea markets, but most of their stuff is fairly generic. Mike and Frank tend to look for the “different” and “unique,” and just aren’t finding any of that here, and they also weren’t finding any bargains.

One item that did get their interest was a large 1930’s concrete eagle from a White Eagle service station. After a quick call to their petroliana guru, they learn it’s a fake, since a genuine eagle would have been cast iron. Mike and Frank don’t waste too much time sifting through the “sloppy seconds,”  and leave empty handed.

Picking lesson #286: If a place has a caboose in the front yard, stop.

Johnny Walker is in the demolition business, and has been salvaging items for decades. This is good for the pickers, because he is not emotionally attached to the most of his items.

Mike finds a nice cast iron table and a spooky-looking cast iron cross, and buys both for a total of $235. Inside one of the outbuildings, a giant cowboy boot hangs from the rafters. Of course, Mike has to have the boot and finally gets Johnny to agree to a price of $200. This boot is 300lbs and nine feet tall, and the guys have a heck of a time getting it down and loaded in the van, but they are determined. 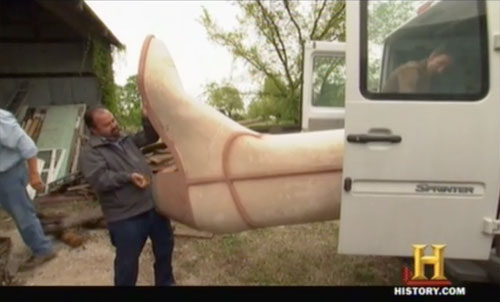 The next day, Johnny sets the guys up with some of his buddies who also have a lot of “treasures.” Junior is a collector of cars and car parts, and anything that has to do with cars. Frank enters one of his rooms and the angels of Heaven start singing, because lining the walls from floor to ceiling are rows of pristine oil cans. Anyone who has ever watched American Pickers knows about Frank’s passion for oil cans, and it was kind of neat seeing him really appreciate the entire collection, and not view it as something he can sell for a quick buck. 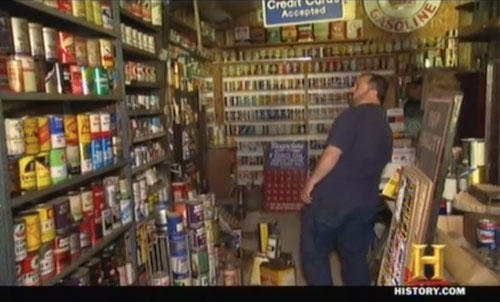 Since Junior is a collector, he doesn’t really have a desire to sell anything unless he gets top dollar for it. He eventually parts with a Shell sign for $75, and a wood rimmed Crescent bicycle from 1890 for $100.

Johnny takes them down the road to another friend’s house, which used to be an old gas station. There we meet Morris, my favorite guest all season. I love old people, and Morris personifies what makes them so great. Morris is a World War II navy veteran and is sharp as a tack. He genuinely enjoys having the pickers rifle through his stuff and is happy to educate them on what they find. He is willing to sell anything and knows exactly what price an item is worth. He understands that Mike and Frank need to make a profit on the items they buy, which I’m not sure has happened yet on this show. 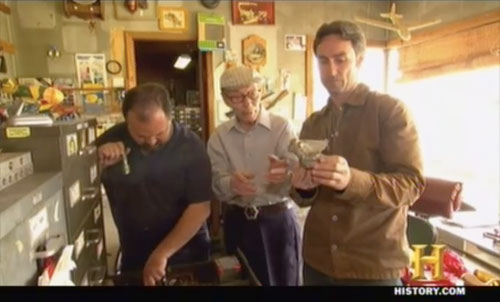 Mike finds an antique Buick hood ornament and shells out $100 for it after falling for the old “heads I win, tails you lose” bit that Morris pulls off. Mike didn’t even know he’d been conned, it was great! Mike goes on to to buy a BSA motorcycle gas tank for $100, and Frank buys a Hubley toy airplane for $25.

One nice scene had Morris showing a vintage Vickers Oil poster to Frank, who had to be careful to keep his drool from slopping onto the paper. Frank tells Morris to “make me take this home with me,” meaning, ‘make me an offer.’ Morris sees how much Frank likes the poster and says, “Okay, I’ll make you take it home with you.” He gave the poster to Frank for free, and Frank’s jaw about hit the floor. People aren’t supposed to treat pickers nicely! I think Frank might still be in shock over that one. 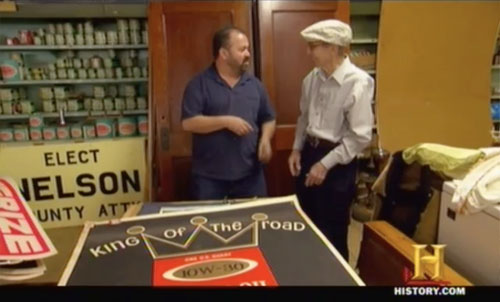 At one point, Mike made a comment about how they don’t buy furniture, which was a little bit of an eye-opener for me. They are primarily mechanical-minded pickers, and I never realized that they always passed up on the furniture. I assume this is because the margin for profit is low, and the ability to sell it fast is probably not easy. Furniture takes up a lot of room and is a pain to move. I’m always amazed at auctions I attend how few bidders there are on some nice pieces of furniture, but then I think about how hard it would be to get it home, and how much space it would take up, and then it’s pretty clear why that beautiful armoire sold for just $25.

The guys leave Kansas and visit an appraiser in Missouri to learn that the iron cross is a catholic burial marker dated 1880 worth $600-700. The Buick winged goddess radiator cap/hood ornament is appraised at $275. 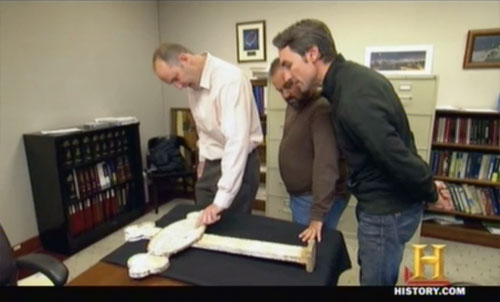 The show ends with some humorous, deep philosophical discussions between Mike and Frank filmed during their many hours on the road.

I enjoyed this episode and appreciate how the show is treating the members of the “Greatest Generation” this season — a stark contrast to the first season. What do you think? Anyone else still loving the Pickers?