This is it, the episode I’ve been waiting two seasons to see. This is the show where Danielle finally gets her wish and goes out on a pick.

Mike and Frank grudgingly invite Danielle to accompany them on a pick. They visit John Conklin, a former carny, who has plenty of vintage carnival items gathering dust and mouse turds in his huge barn. Mike and Frank do everything they can to belittle Danielle and make her feel like the novice that she is. They give her a hard time for not bringing a flashlight, and for her desire to keep her hands clean.

Frank buys some milk bottles from an old carnival game and a sign for the game for $50, and two Mobilgas pump doors for $40 each. Mike buys six hats for $100. This barn is loaded with amazing things! Danielle is a bit overwhelmed, and doesn’t know where to begin, until Mike gives her a tough love pep talk, and then she starts finding things. She buys several drawers full of printing press blocks after haggling the price down to $62.50. This was a great price, since I know those wooden letters can go for a dollar to ten dollars apiece.

Danielle also buys an antique lady’s dress form, which has seen better days but still seems a bargain at $40. 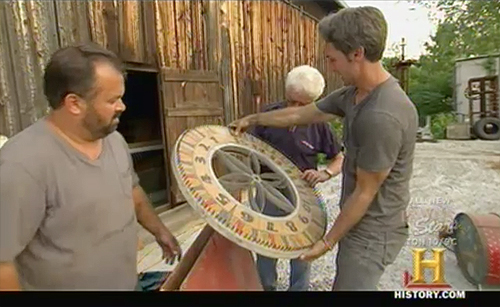 Mike gives her a B- on her first picking test, and now it’s Frank’s turn to try and do Danielle’s job for a week.

Danielle and Mike hit the road together and head to Pensylvania. Frank is in charge of finding good prospects but comes up empty. Apparently it’s no easy task finding people with a ton of junk that is ripe for the picking. The best scene of the show has Danielle curling up in the front seat with her skull-covered Snuggie. Priceless.

Since Frank couldn’t do Danielle’s job, Mike and Danielle are forced to do some freestyle picking. They stop at a graffiti-covered house in a small town, which is quite out of place. I’m sure the neighbors are thrilled. The house is owned by Ricardo and Jessie, two artists who ride up on their tandem bike, sporting hats that look like something out of a Dr. Seuss book. American Pickers has never seen the likes of these two characters, and that’s saying something (remember the mole man?). 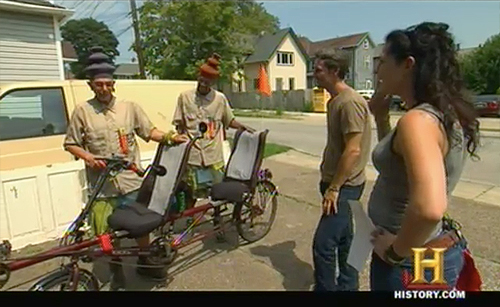 Apparently, Ricardo and Jessie walk the streets of the world in their crazy getups, as a form of living sculpture, and bring smiles to everyone they meet. I guess I’d be smiling if I saw them in my neighborhood. 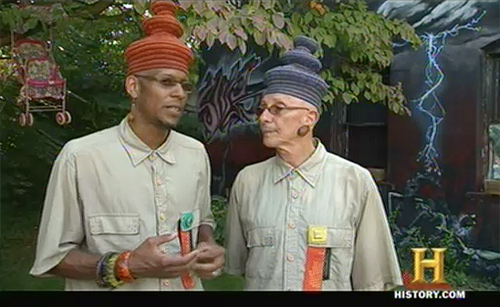 Their house and garage is crammed with stuff that even Mike deems as worthless. Danielle has a different opinion, though. She is enamored with some vintage clothes. I’m not sure why Ricardo and Jesse have so much women’s clothing. Hmmm. Danielle goes on a shopping spree, and spends $270 on clothes, and also buys some old windows (against Mike’s judgment).

Mike wants the 1957 Rolls Royce that is buried under boxes in the garage, but his idea of what it’s worth is nowhere near what Ricardo and Jessie think. So, Mike ends up buying only a single item, a vintage Christmas star  for $30.

Mike seems to be enjoying Danielle’s company, and even comments that  she smells better than Frank. Such a charmer!

Frank is still having tough time finding leads, so Danielle gets to work and finds a lead from the road. She and Mike go to an old hotel owned by two brothers, Steve and Bill, who run a bar in the lower level but want to renovate the whole building at some point. The hotel has 140 years worth of junk stashed in all the rooms that has never been picked before, and Mike is a little excited. He buys a Fort Pitt Beer advertising clock for $76 since a friend of Steve and Bill’s had only offered $75 for it. Danielle uses her feminine charms to buy a vintage portrait for just $15.

They go down to the basement and find all kinds of good stuff. Unfortunately, a lot of it has been ruined by water damage sustained over the years. There is a huge apothecary chest but many of the drawers are missing. Danielle offers to buy just the drawers and proceeds to dump out the contents right in the middle of the floor! 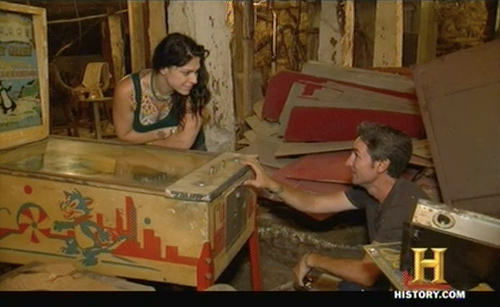 Mike finds a 1962 Midway pinball machine with great graphics of a cat chasing a mouse. Bill wants $200 for it, and Mike can’t get him to lower the price. He sends Danielle in to see what she can do. After much eyelash-batting and ego-stroking, she gets the price down to $90! Danielle has Bill and Steve eating out of her hand.

Mike and Danielle take the pinball machine to an appraiser where they learn that it’s worth $700. They plug it in and it still works. The value of the machine shoots up to $900.

Frank has been at the shop a week and has had enough. He misses the road and is glad to be done with this little test. Danielle did an amazing job, and this was possibly my favorite episode ever. Sorry Frank, but the male/female dynamic added a lot to the interaction with the sellers, and made for a more enjoyable show. I think we might see Danielle on a few more picks in the future. What do you think? Did you like the way Mike and Danielle worked together on the road?