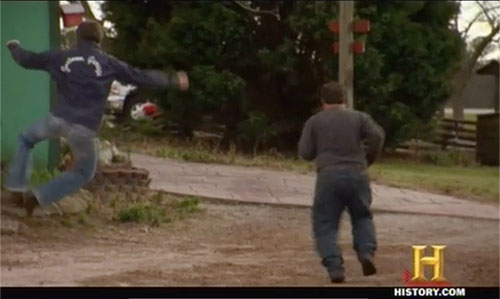 Hurray! Mike and Frank finally got the star treatment, which made the show way more enjoyable to watch than last week’s episode. Everyone they visited this time seemed to realize they were on TV, and genuinely appeared happy to have the guys pawing through their stuff. The show was filled with hugs, handshakes, and post-pick “compliments” for the ladies. I’m not sure if it was necessary to hear the guys say all the women they met were “easy on the eyes.” I think the six and a half foot tall Butch might not have appreciated the comment, but we’ll get to him later.

The guys were still in North Carolina this week, where the picking is easy since everyone keeps all their stuff on the lawn. We got a nice glimpse of fan-favorite Danielle and her tattoos. Va va voom! I’m not sure if those were leopard spots or what, but me likey.

The first pick was with an old gent named, Buddy, a self-described “junk boy from the West” who had way too much stuff and was happy to swindle Mike into buying an antique booby trap. Supposedly, this trap would hang over a door or window and if anyone tried to enter, it would shoot a bullet straight down and scare the intruder away. Well, Mike was sold, saying “I learned a long time ago, the time to buy something unusual is when you see it.” While I may agree with that statement, I would not have plunked down $150 for that rusty piece of metal without a little more assurance. 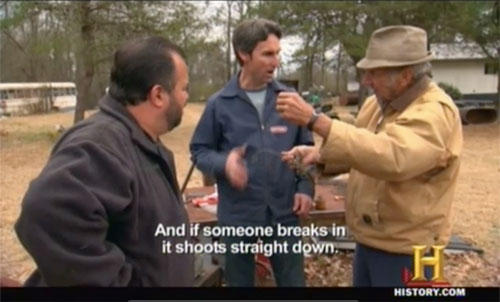 Buddy also unloaded an old Pinto trophy, an Andre the Giant wrestling figure, a Donald Duck pull string toy, and a moveable metal staircase to the guys and everyone was happy. I was happy to see some pop culture items in the mix (more please.) Frank bet Mike $100 that the trap wasn’t really a trap, since it was stamped with AAA on the backside.

The next stop was a house where a mother and daughter had inherited a huge amount of rusty things and had no problem getting rid of it. Patty and daughter Jessica were both “easy on the eyes” and  the items purchased were an old stoplight from a bus, a John Deere service manual, and an iron garden sculpture. One interesting interaction came when Patty asked Mike what the stop light was worth after he offered her $25 for it, and Mike actually told her! He said he would put it in his shop for $50. I thought that was a classy move on his part and would like to see more of that. It’s kind of like what they do on Pawn Stars, where they state outright that they need to make a profit on an item and are upfront with the seller. Of course, this makes for better TV, but if the cameras weren’t rolling, there’s no way Mike shows all his cards.

Humorous fact learned in this show: Frank and his lady friend watched Sex and the City for his birthday. He fell asleep.

An antique shop is closing and the owner, Robin, invites the guys to look around. It turns out that he is emotionally attached to the goods and doesn’t really want to sell anything at first but he eventually warms up and sells a few nice signs.

Robin takes Mike and Frank down to a nearby Christmas tree farm/hot dog stand/church where they find the owner is quite a character. The guys have a lot of fun with her and end up riding away with an antique cash register, a monitor top GE Refrigerator, and an Esso clock face gas pump.

Next stop, the Aw Shucks farm, a place that educates kids about our country’s history. Bonnie runs the place while her pal Butch stands around looking menacing. Butch is a big dude, and a Stone Cold Steve Austin lookalike. Mike and Frank were on their best behavior. They found plenty of vintage signs with price tags that were way too low in my opinion. I almost think that Bonnie might have made a sly move to get on the show to promote her farm, and offered plenty of amazing things at rock bottom prices. Great move on her part, whether intentional or not. The Aw Shucks farm looks like a great place to visit. I wouldn’t be surprised to see this happen more often now that the show is a big hit. 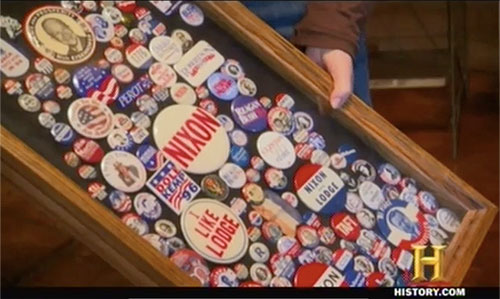 I was happy to see a few pop culture items even though they were passed over quickly in favor of more rusty signs.

In my opinion, this Anco wiper blade sign was the best find of the show. Remind you of anyone? 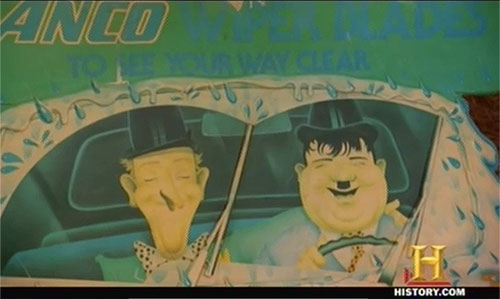 Mike and Frank visit an appraiser to see what they can learn about Buddy’s booby trap, and who will owe the other one $100. It turns out that the “booby trap” was actually a device used to check the brakes on a car. Frank is $100 richer. Yea Frank! That almost makes Mike’s “fat and hairy” comment sting a little less.

Overall, this was a pretty good episode. The show had much better “contestants” and there wasn’t a single uncomfortable moment, other than those provided by Mike, but we expect those now. I’m still waiting for mega pop-culture picking extravaganza, but Mike and Frank may need to head for the hills of Hollywood for that to happen.

Anyone catch the teaser for next week’s show? It looks like Danielle may be headed on a pick! Will it work or will it be an epic fail? I can’t wait to find out. What did you think of the show?