After a brief hiatus, American Pickers returned with some great stuff. This episode starts with Mike talking to the camera, sporting some nice, expensive new shades. The shop is looking pretty spiffy, too. Antique Archeology has benefitted from the success of the show, and it looks like Mike may have gone a bit Hollywood.

Mike and Frank visit Bushkill Park, a former amusement park that has hit some hard times. The park opened in 1902 and was operating until hurricane Ivan hit in 2004 and flooded the entire park. Neal is one of the owners and is looking to raise some funds so he can reopen the park. The pickers have  a good time finding some old carnival attractions and rides, and buy a W.F. Mangels High Striker mallet game for $50 and a large shooting star sign for $100.

They visit the funhouse which has some crazy images painted on the walls, Mike would love to have those, but you can’t really buy a wall, so he settles for a “No Smoking” sign for $25. This particular funhouse is the oldest funhouse in America, and it’s pretty sad to see it in its current state. I hope Neal is able to raise the funds he needs to restore it to its former glory. 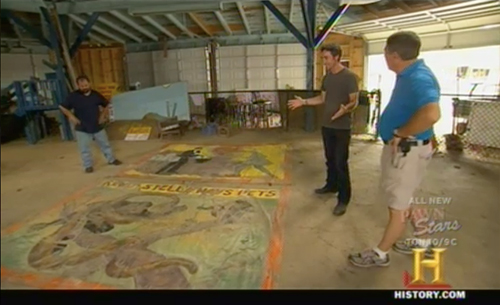 Mike finds a couple of huge canvas freak show banners that are incredibly cool. One shows a magician act and the other has a gorilla wrestling a large snake — something I would love to have hanging in my house! Neal thinks the banners are worth around $200, but Mike offers him $700, which I thought was one of the biggest rip-offs in the show’s history. I was screaming at Mike for taking advantage of the guy. Anyone who knows anything about vintage circus posters and the like, knows how rare and valuable those items can be.

Frank wants to buy a steel bumper car, and offers $500, which is way less than the $2,000 that Neal wants, but he reluctantly agrees to the $500 offer. The show has been pretty good about not robbing people blind in this second season, but this episode was a reminder of what Mike and Frank pulled on some of their sellers in the first season. Mike and Frank leave a fairly shell-shocked looking Neal behind as they hit the road again. 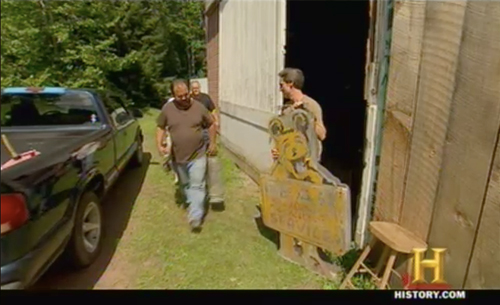 Next stop is Tom and Deb, who are big collectors, and are supposedly looking to clean house and do some traveling in their RV. Mike and Frank take this to mean that they are ready to sell, but that’s not necessarily the case. Tom knows exactly what he has and exactly what it’s worth. He is a collector who typically pays top dollar for items, and he isn’t too interested in losing money.

Tom has a ton of great stuff, but it takes a while for Mike and Frank to break the ice. They eventually buy  a galvanized Bear Alignment Service sign for $100, and an antique fire extinguisher for $10. They also find an Atlas Permaguard thermometer for $10, a lamp  for $10, and a Victorian photo for $15. 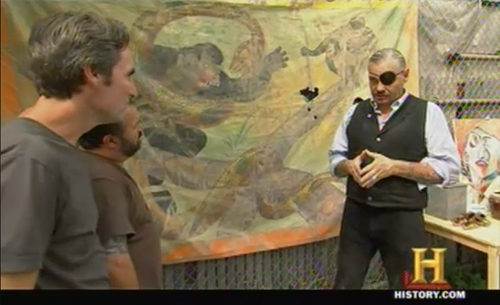 In a strange change of pace, Mike and Frank go to New York City, where they quickly learn that it’s nothing like the Mid-West. They visit Billy’s Antiques and Props to get the freak show banners appraised. Billy is a huge man with an eye patch and tattoos — not your typical antiques appraiser, but one I think I’d like to know. He hangs the banner right there on the street to get a good view of it, and tells the guys that it’s from the 40’s or 50’s. He thinks it was painted by Fred Johnson, who was one of the best banner painters of his time. If the gorilla banner was in perfect shape, it would be worth $10k, but this one is in rough shape and is worth $5-6k. Billy offers them $3,500 on the spot, but Mike wants to hold onto it.

I’m beginning to wonder how many of the items the pickers pick actually get sold. It seems like the coolest items end up decorating the shop. I’d love to see a year-end recap show where they show actual prices they received by selling the things they picked. 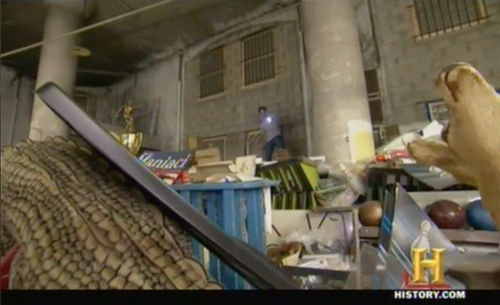 The real reason Mike and Frank are in the Big Apple is to pick a storage unit in Staten Island. The renter of the unit has defaulted on his rent, and has agreed to hand over the contents to the storage facility’s owner, Scott.

When you think of a storage unit, you might think of a small 10 x 10 block. Well, this storage unit is just a bit larger. It is massive and piled high with antiques. The renter had been paying a whopping $5,000 a month, so Mike and Frank are convinced there has to be something good in all those piles. And, since Scott is not the one who collected all the items, he is more than happy to sell it all.

Mike buys a stash of six old baseball trophies for $100 and a large triangular amusement park sign for $20. Frank buys a vintage auto racing poster and an antique post office wall of mailboxes. He also buys a cabinet and display stand for $90. They buy a fire truck from an old Coney Island amusement park ride for $150, and Scott wants them to take even more stuff. The buying continues as they get an oak movie theater display stand and another amusement park ride for $250. The last item they buy is a really neat firetruck Pony Cart made by W.F. Mangels of Coney Island. They compete with Scott in a rock paper scissor challenge and “win” it for $200. 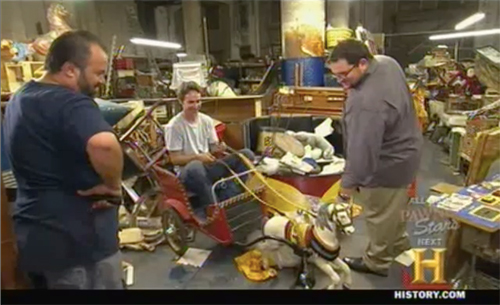 When Mike and Frank return to the shop, Danielle tells them that she has already sold the freak show banners for $5,000. The guys feel a tinge of remorse and head back to Bushkill Park to see Neal again. They tell him how they did on the sale and hand him half of their profit. I guess the History Channel heard all those complaints from season one and wanted to make sure Mike and Frank are likable TV personalities. You can bet if the cameras weren’t rolling, those two would be laughing all the way to the bank.  Do you disagree? Let me know what you thought of the show and how this season is going.