Over the holiday break, I was itching to do something creative that didn’t require sitting in front of the computer. One of my passions is photography, so I thought I would build something to help me take better photos of action figures, since I do a fair bit of that for this website. 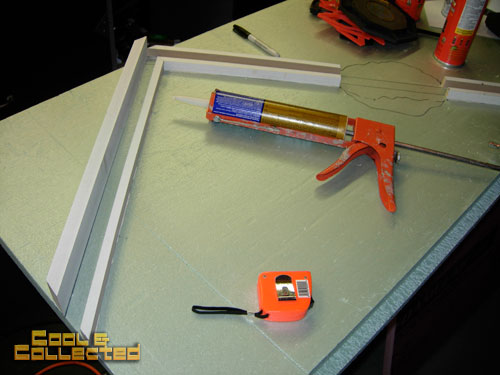 I knew that this diorama/backdrop would need to be stored somehow when I wasn’t using it, so I devised a way to make it modular so that it can be disassembled and stored flat. I cut some strips of scrap wood and used liquid nails to glue them to the 2″ insulation board. These will be used to hold the walls. Insulation boards are incredibly light, so I didn’t need to worry about building this with strength in mind. 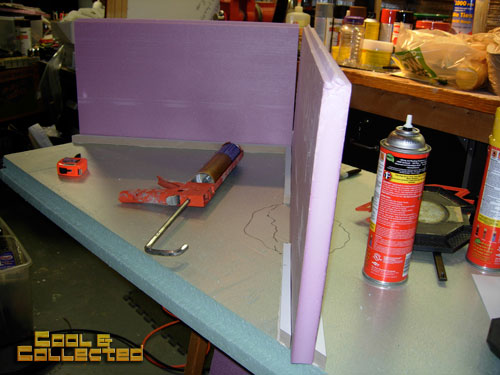 I sliced the 1″ insulation board in half so that the walls would be one foot tall. They slide smoothly into the wooden channels. 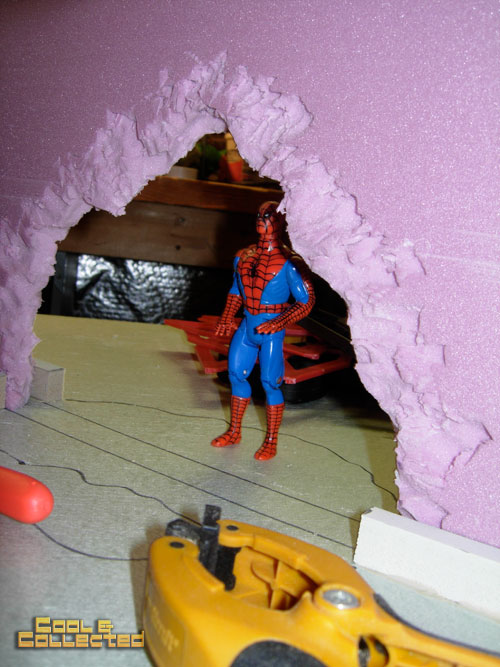 Part of my plan had a portion of the wall being breached by an explosion, so I hacked and slashed at one of the walls with a box cutter until achieving the desired look. 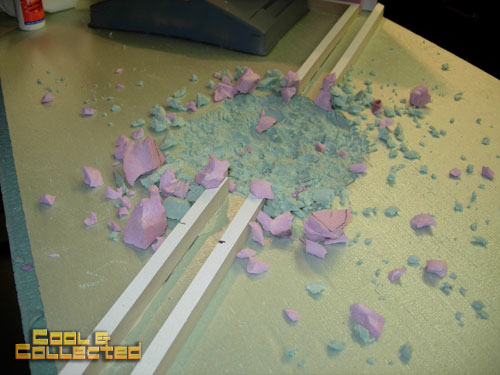 If the wall was exploded, then the floor would need to be damaged as well. Some more chopping with the box cutter resulted in a nice hole in the ground. Some of the wall scraps and chunks were placed around the blast area to make the damage look realistic. 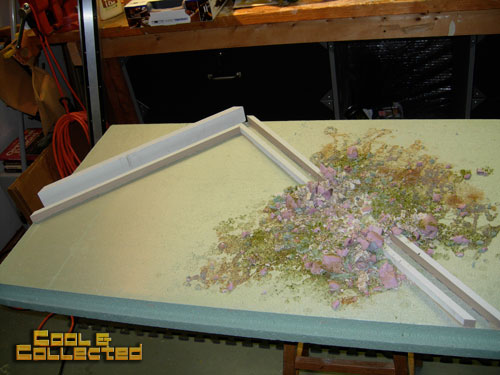 I sprinkled in a bunch of dust and dirt and rocks and other detritus found laying around on the floor, and then poured on a hefty dose of Elmer’s glue mixed with water (50/50 ratio). It ain’t pretty, but after letting it dry overnight, the glue will seal all the styrofoam and dirt, and the glue dries clear.

After the glue dried, I painted everything with some ugly brown house paint. There are a couple of reasons for doing this:1. the paint helps to further glue any loose items down, and 2. the paint is water-based acrylic. I knew that I would be using spray paint later on, but spray paint will literally melt styrofoam, which is not something I wanted to do, so the house paint serves as a protective primer for the styrofoam. A great tip is to check the mismatched paint section of your hardware store. You can usually find a gallon of paint for $5, which is much cheaper than the full price. 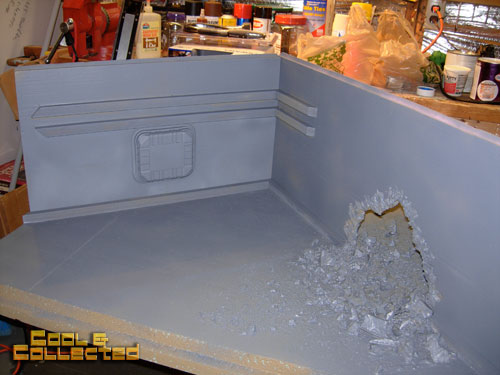 Here’s the assembled walls with a nice fresh coat of grey primer spray painted over the whole thing. It’s starting to take shape! You’ll notice I added some more wooden strips to the walls–these will hold a second floor walkway which can be easily removed or added, depending on the photo I want to take. The walls needed some dimension to make the photos more interesting by casting shadows and providing some visual interest, so I added that little square piece, which is the lid from a clear plastic grocery store strawberry container. After it is painted, it looks like a control panel rather than a plastic lid. 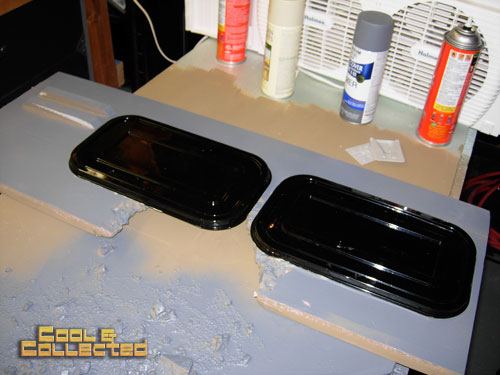 That one long flat wall was bugging me so I rummaged around in the recycle bin and found these two food trays. I had to suffer through two cinnamon loafs to make this wall! A little more liquid nails and this wall was about to get much more exciting. 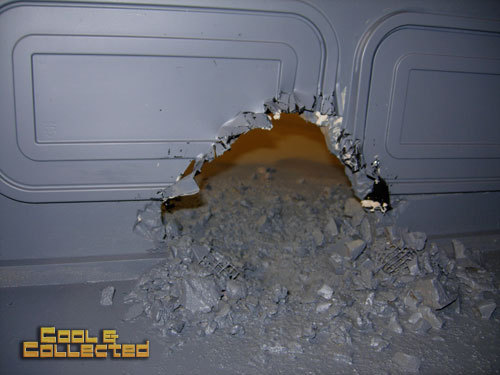 Here’s the wall after attacking it with some tin snips and scissors, and then painting the whole thing with primer again. Much better. 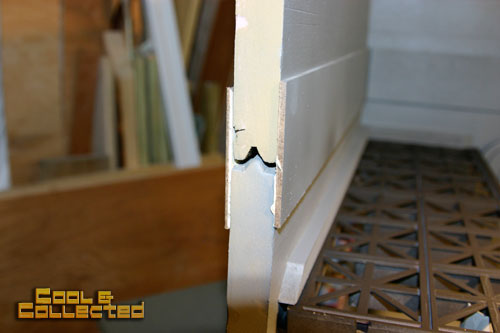 I thought it might be handy to have taller walls in some photos, so I glued some 1/4 wood strips to the top of the two walls, creating a channel for the extensions to slide into. The photo above shows the side view of how this works.

In case I wanted to photograph larger figures or vehicles, the floor needed to be fairly clear so I made some simple props that could be added or removed. These columns were made out of an old plastic tube. The tube was octagonal which was perfect, and after gluing a couple of plastic model parts onto the sides, they look more industrial. (I painted these slightly and gave them a bit of black wash after this photo was taken.) 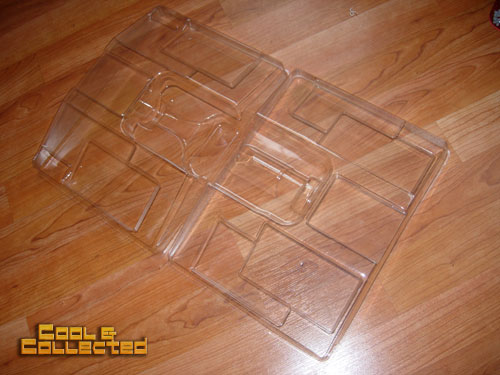 My son got a large package of Pokemon cards for Christmas and I thought the inner packing plastic looked promising. 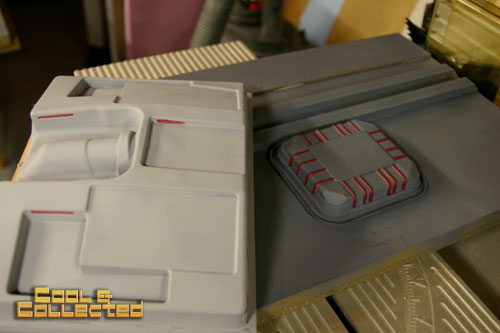 After a coat of light grey spray paint and minor bits colored, it makes for a pretty decent prop. 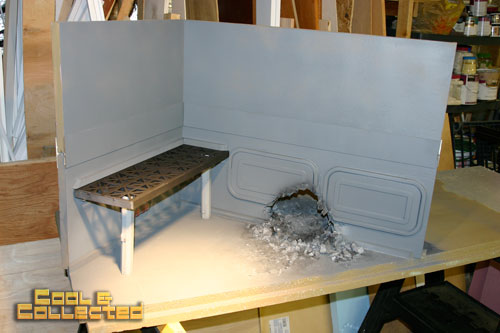 And here’s the final result. The black catwalk was made from an old diecast car carrying case that I had laying around. It’s criss-crossing beams make for some great shadows.

And now the fun part begins — taking some photos! 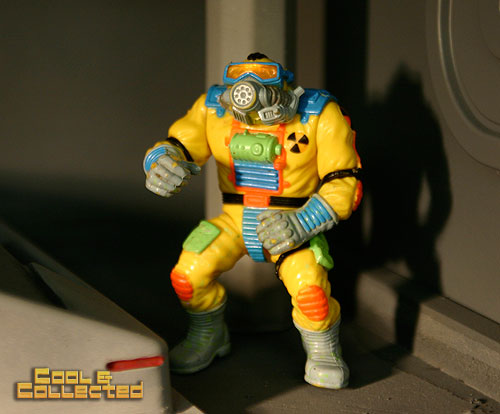 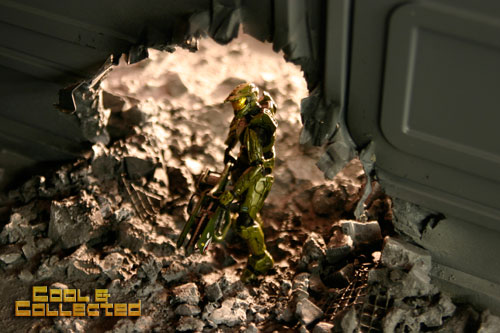 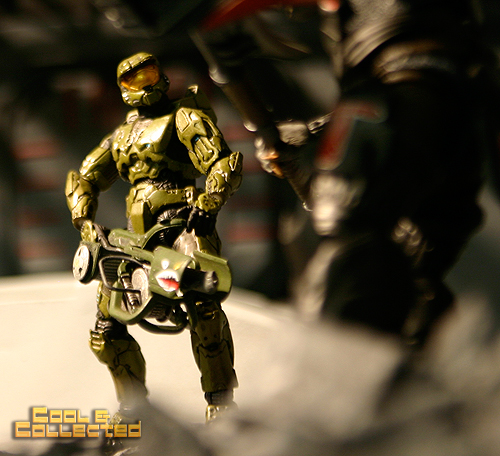 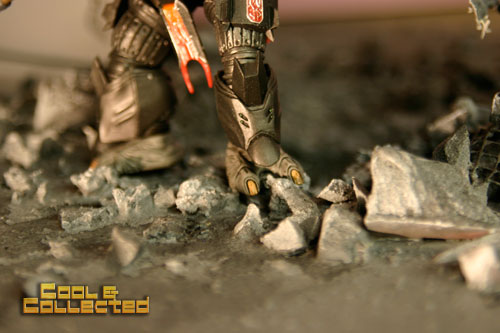 i did almost no painting on this backdrop but I did give the rubble a coat of black wash (50% water/50% black paint) and dry brushed the edges with white paint. The results are pretty convincing. 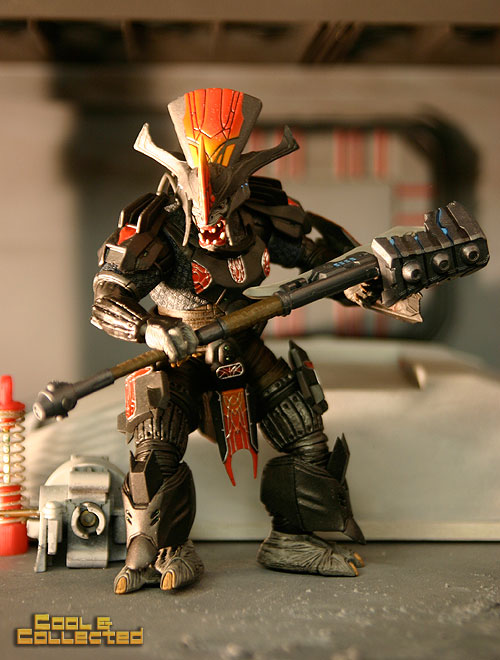 These photos were taken with just a single incandescent bulb lighting them, and I can’t wait to try out some other lighting setups and camera angles.

This was a fun project to build and was really simple to put together. It would make for a great weekend project if you wanted to make a backdrop for your photos or even a diorama for displaying your figures on the shelf. The best part about it is that you can’t really screw it up, just experiment and have fun.