Editor’s note: Brad from “In The Mouth of Dorkness” was kind enough to cross-post this article describing his recent visit to SDCC. If you’ve ever wondered what it was like to visit the geek mecca as a fan, then sit back and enjoy…

But I didn’t discover comic books until I was ten years old and my family moved to Virginia. The first comics I ever purchased were Marvel’s GI Joe # 103 and the film adaptation of Robocop 2. I was immediately hooked on the format.  And a few months later I learned of this thing called San Diego Comic Con. And I’ve been screaming and hollering to get back ever since.

Last year, after four days of constant bombardment of Con Reports, Con Tweets, and Con Livefeeds—I COULDN’T TAKE IT ANYMORE. I swore to myself that I would make it to the 2011 Con come Hell or high water. And you may have heard, it was quite the hassel to get tickets for the bloody event. I took three days off work from the months of November to February and I cursed up a blue whale after each and every epic fail. But I’m not gonna complain anymore. I got my tickets. Lots were not so lucky.

And now SDCC 2011 has come and gone. I can’t really believe it. I’ve been suffering from “Con Joy Withdrawal” for nearly a week now. It’s a serious condition, people. I haven’t been able to concentrate on anything else since 5 PM Sunday close. I finished out my San Diego trip with treks to the Zoo and Universal Studios, but it all paled in comparison to the panel extravaganza or the exhibitor hall spending spree. It’s a drug. And I want more.

Comic Con hits you the moment you step out of the airport. From the windows of our rental car, banners wave from street posts announcing Comic Con as a “celebration of the popular arts” on one side and advertising this fall’s Real Steal champion Noisy Boy on the other. And as you drive towards the Convention Center the meta marketing intensifies. Temporary Conan O’Brien art museums, high-rises draped with gargantuan movie posters, and transformed Eureka themed cafés pepper the Gaslamp district.

Wednesday evening was devoted to acquiring our badges. Across San Diego half a dozen locations were sanctioned zones and our group (I was traveling with my wife and the fine folks behind Liquid Flame Productions) planted ourselves in the Town & Country line five miles out from the massive crowds of the Convention Center. The line moved fairly quickly, got through a few hundred people in a couple hours. I can’t tell you how excited I was once the badge was finally placed in my hand. I was all giggles and goosebumps. And then the fight was on to snatch the coolest Comic Con bag. My wife got her Supernatural bag and I managed the Arkham City. 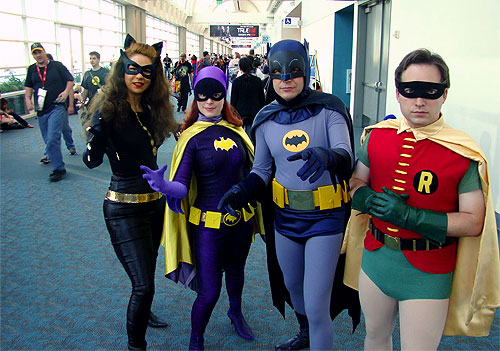 Thursday was the big day. There’s nothing like waking up at 4 AM and knowing that you’re already way late for the party. By the time we got to the convention center several thousand people were already well ahead of us in line. The Twilighters had been camping since Monday and they looked beat. But they were rewarded for their hardship with Twilight sponsored breakfast served in the form of apples and bottled water, plus a surprise appearance from Nikki Reed and Ashley Greene. From the other side of the tent I snapped a few photos and felt that celebrity paparazzi glee.

As the morning passed we were ushered inside the Convention Center and eventually, the doors to the exhibiter hall were opened. I had originally planned a hard target search of the room but once the doors cracked Willy Wonka’s Chocolate Factory was made available to us and I lost my mind. This way! That way! Over there! Over here! The Ghost Rider bike! Holy Cow, is that Mike Mignola with no line!?!? It is! 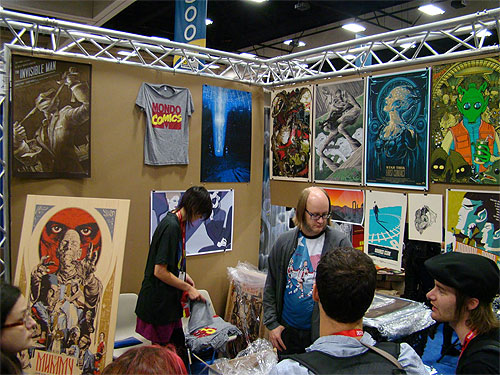 Every which way we ran. I jumped into the Entertainment Earth line so I could get my SDCC exclusives. Shatner Twilight Zone. Lost Polar Bear Bobble Head. Doctor Who Tardis bobble. Ran over to the Mondo booth. Grabbed the Star Trek: The Motion Picture print and eventually a Cowboys & Aliens print. I could have easily spent my whole allowance (wife was watchin’) at that beautiful booth. Snapped several great photos at Sideshow Collectibles, Gentle Giant, Hasbro, Mattel. There is not enough money in the world to satisfy my ravenous spending desires, but I did my darndest. 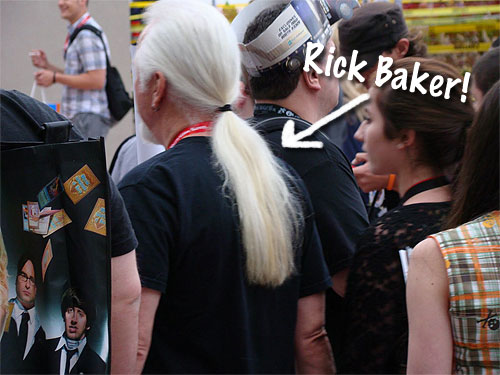 But I couldn’t spend too much time in the dealer’s room. I wanted to make sure I got into Hall H for the Guillermo Del Toro Don’t Be Afraid of the Dark/Nicolas Winding Refn’s Drive panel. We ended up walking right into Hall H at the tail end of the Twilight panel and I immediately felt sorry for those Twilight campers.

I’m not going to go into detail on all the details revealed over the course of my Hall H days cuz I’m sure you’ve already readup on all that jazz weeks ago. As a movie geek I just spent those hours soaking in all this surreal madness. The twitchy Rob Pattinson lead to Morgan Spurlock that lead to Pee Wee Herman that lead to Guillermo Del Toro, Guy Pearce, Ron Perlman, Carey Mulligan that lead into Justin Timberlake (squeal!!!) that lead to Charlize Theron and satellite Ridley Scott…and then Robert Rodriguez, Kevin Eastman, and Frank Frazetta’s son! Madness! Charlton Heston level Madness!

Just one day into Hall H and I was exhausted. After a while you reach this plateau of AWE where every movie looks amazing and you’re just over-the-moon for every bit of exclusive footage. Fanboy sickness. And as I staggered out of the convention center, sun fading, who is to my left but Rick Baker. The man responsible for so many great bits of cinematic art and I’m just shoulder to shoulder with him in the Hall H exodus. I wanted to introduce myself. I wanted to screech my love for his art. But I couldn’t muster up the courage and just snapped a few stalkery photos from behind. From there we crashed inside the Gaslamp district, chowing down on food, ranting on the wonders we had seen for the day. Before you knew it, bedtime, 4 AM wakup, and Hall H line.

With the exception of Shatner’s Captains panel (my favorite panel btw, Trekkies represent!), we spent the rest of Friday consumed in Hall H. Again. So many celebrity wonders. Steven Soderbergh, John Cussack, Edgar Wright, Nicolas Cage, Colin Ferrel, and Andrew Garfield’s adorable sincerity. I wonder, if I’m blessed by the Dork Gods and granted entrance into SDCC 2012, would I spend another three days trapped in Hall H like I did this year? Not sure. I absolutely had a blast star gazing and watching exclusive clip after exclusive clip from Haywire to Ghost Rider 2 to The Amazing Spider-Man (I can’t believe there’s no snout on the Lizard!), but all that stuff eventually is made available to you via these wonderful interwebs and while I was in Hall H I would get these tweets from the Exhibitor Hall saying, “Shatner randomly giving out autographs near Shout Facotry booth” or “Mondo’s got a few copies left of the Olly Moss Captain America Prints! Be Quick!” And I couldn’t go anywhere cuz I was neck deep in 5,000 seated nerds. I figure if I do go I’d spend some time in Hall H, but maybe not whole days like I did Thursday and Friday.

Saturday & Sunday there were more panels of course: Frank Miller, Joss Whedon, the Supernatural boys. But I could sense the Con coming to a close and I needed more time in the dealer’s room to buy some goodies. And it’s really that Exhibitor’s Hall where you experience the true surrealness of Comic Con. You’ll be flipping through some random long boxes, look up and there’s comedian Doug Benson doing the same thing next to you. You pass booth after booth of Peter Mayhew (aka Chewbacca), Gil Gerard (aka Buck Rogers), the girlfriend from the first Back to the Future, Thomas Jane selling comics. I stopped at Kevin Eastman’s table, bought the 25th anniversary edition of Teenage Mutant Ninja Turtles, and he asked me “Who’s your favorite Turtle?” “Donatello,” I said naturally. And fifteen minutes later I had an original sketch inside my book. After a while your brain goes numb—pop culture overload.

And just when you think it can’t get any weirder you randomly meet John Landis on the street. That was the best moment for me. After the weird stalkery encounter with Baker I had to be a proper Dork and unleash my fandom upon Landis. My wife and I were walking back to Petco Park when we saw this happy bearded fellow lifting himself outta one of those bike taxi rickshaw devices. I thought to myself, “That looks like John Landis—That is John Landis!” And I made a bee line right for him. “Mr. Landis, I just wanted to say you are one of my all-time favorite directors and could I shake your hand?” He did just that, smiled, and said “Thanks!” and off he went towards the convention center. That made my 12-year-old boy heart warm and fuzzy. The absolute Dork highlight.

Before embarking on this great adventure, I heard a lot of complaints from old timers about San Diego Comic Con. It’s too crowded. It’s no longer about comics. The movies are pulling out anyway. Forget that noise. It is crowded. But not terrifying. It’s amazing. Being shoulder to shoulder with dorks just like you. Having random conversations while waiting in line. Talking comics, books, movies all weekend long. San Diego Comic Con was everything I wanted it to be and more. And I’m now addicted. I gotta do it again.

Be sure to check out Brad’s site to see more pictures from Comic Con. Thanks, Brad!