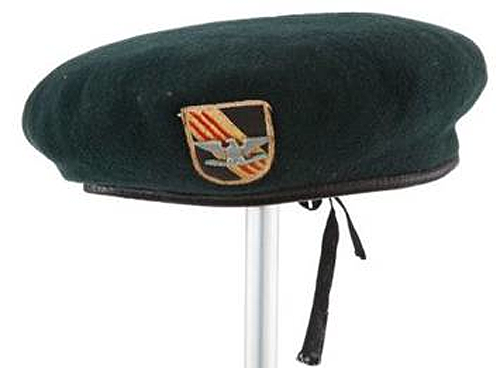 LOS ANGELES, CA – More than 700 costumes, scripts, awards and memorabilia from the estate of legendary film star John Wayne brought more than $5.38 million during a two-day event hosted by Heritage Auctions (HA.com ), in conjunction with John Wayne Enterprises, with dozens of items bringing at least two-to-three times their pre-auction estimates.

The auction was held at the Hyatt Century Plaza in Los Angeles, and online, on Oct. 6-7, 2011. All prices realized quoted above include a 19.5% percent buyer’s premium and represents the actual, full price being paid by the winner bidders for the items.

Top items included the signature green wool beret worn by Wayne in the notable film “The Green Berets,” which realized $179,250; his Golden Globe Award for Best Actor for his role in the 1969 film, “True Grit,” realized $143,400; the cowboy hat from two of Wayne’s films, “Big Jake” and “The Cowboys” brought in $119,500; Wayne’s last Driver’s License brought a record price for a permanent Driver’s License when it realized $89,625 and Wayne’s iconic eye patch from the Academy Award winning film “True Grit” sold for $47,800.  More than 2,600 fans submitted bids either in person or online from around the world.

A portion of the auction proceeds will be used by the John Wayne Cancer Foundation to help fund cancer research, treatment and education.  Wayne, an Academy Award winner, died of cancer in 1979.

“This was all about my father’s fans,” said Ethan Wayne, son of the legendary actor and President of John Wayne Enterprises. “It was important to our family to give his thousands of admirers the chance to own a piece of my father’s legacy. He loved his fans almost as much as his family, and now they will always have something to remember him by.”

“All the items were carefully preserved by Wayne’s family for the past 32 years, and that care has certainly paid off,” continued Rohan. “The prices realized show just how beloved John Wayne remains today. They also show that iconic Hollywood memorabilia items continue to sell regardless of the state of the economy.”

John Wayne’s monumental film career spanned six decades.  He appeared in more than 170 films, a dozen-plus directed by legendary film director John Ford, and is one of Hollywood’s biggest and most durable box-office stars.  Incredibly versatile, Wayne starred in almost every genre Hollywood offered from war movies to romantic comedies, police dramas and biographies, but it was the Western – the American cinema – where Wayne made his most lasting mark.

Wayne was nominated three times for the Academy Award, winning the Oscar for Best Actor in 1969 for “True Grit.” In a recent Harris Poll listing of America’s favorite movie stars, John Wayne ranks third, and has never been out of the top 10 since the poll’s inception.

Other highlights of the auction include, but certainly are not limited to:

A Holster and Gun Belt from “El Dorado”: Paramount, 1966. Both made of brown leather, belt with thirty cartridge loops and a silver metal square-shaped buckle, twine detailing on both holster and belt, with evident heavy wear; likely worn in other films as well. Realized: $77,675.

An Eye Patch from “True Grit”: Paramount Pictures, 1969. Made of black leather with fine wire mesh covering a cut-out hole; makeup residue still evident on inside patch; one of many worn by Wayne throughout the film as he portrayed the iconic character, “Rooster Cogburn.” According to Luster Bayless [Wayne’s longtime costumer] in the 1996 book, “Duke, We’re Glad We Knew You” by Herb Fagen, “…Duke…needed a fresh (eye) patch every day. Each morning he’d check the thing to see if there was any makeup inside it.” Realized: $47,800.